New data from the Federal Housing Finance Agency show Arkansas house prices rising over the second half of 2011.  The statewide average “All-Transactions Index” increased 0.3% in the fourth quarter, following a revised 0.8% gain in the third quarter.  Comparable data for the U.S. showed a similar rebound in the second half, up 0.4% in the fourth quarter following a 1.0% increase in the third quarter.  Arkansas home prices are still down 0.7% from the end of 2010, but evidence is accumulating that the trend of declining prices has abated. 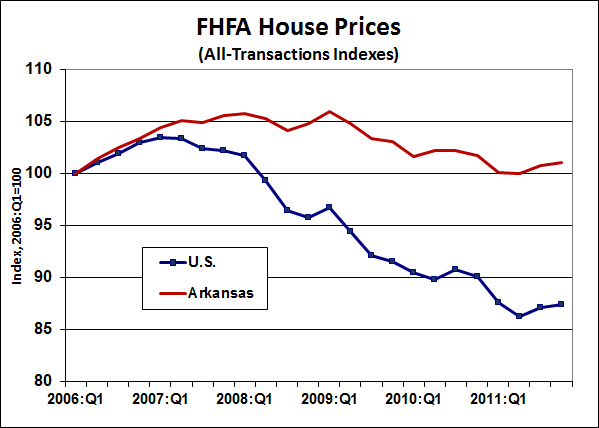 Of course, house prices in different areas of the state do not move in unison.  Fourth quarter changes in the FHFA indexes were mixed among the state’s metropolitan areas. 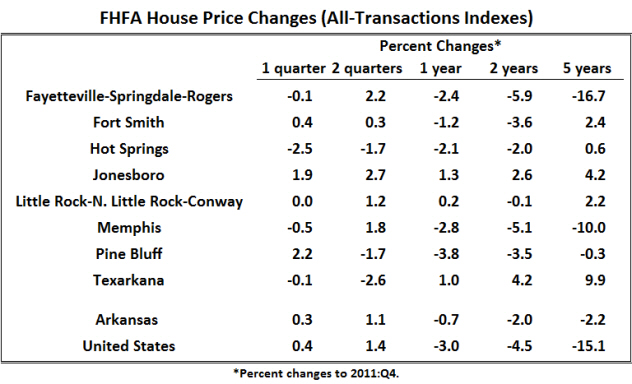 Although Arkansas house prices appear to have stabilized toward the end of 2011, downward price pressures remain.  In particular, ongoing foreclosure activity and other sales of “distressed” properties tend to drive average prices lower.  This is more likely to be a factor in areas of the state where general economic conditions remain weak.  Nevertheless, the fact that mortgage delinquency rates and foreclosure activity are lower in Arkansas than elsewhere in the nation bodes well for the outlook.