The Arkansas Realtors® Association (ARA) released new home sales data yesterday, covering the final two months of 2012.  November sales were up 6.6% from the previous year, while December sales were down 6.2%.  For the two-month average, home sales were essentially flat (+0.1%) compared to the same period in 2011.  The chart below shows that Arkansas home sales in 2012 were a repeat of the 2011 experience:  a typical seasonal pattern with no apparent change in trend.  In fact, the annual figures from the ARA show that sales in 2012 were down 1.1% for the year as a whole. 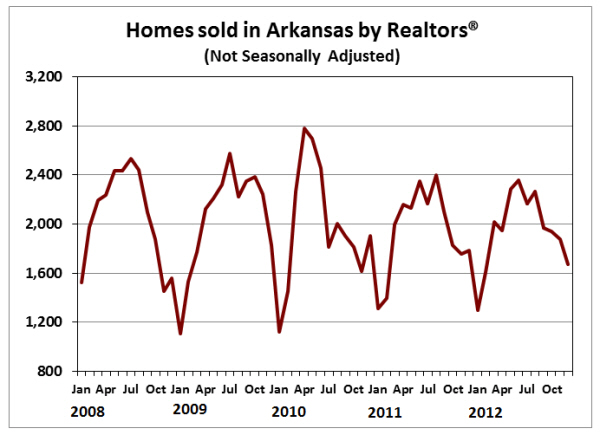 After seasonally adjusting the data to statistically remove recurring annual patterns, the flat-line for Arkansas home sales becomes even more evident.  In the figures below, seasonally-adjusted data are displayed for the monthly sales data and for quarterly totals.  Both charts illustrate the absence of any discernible trend over the past two years. 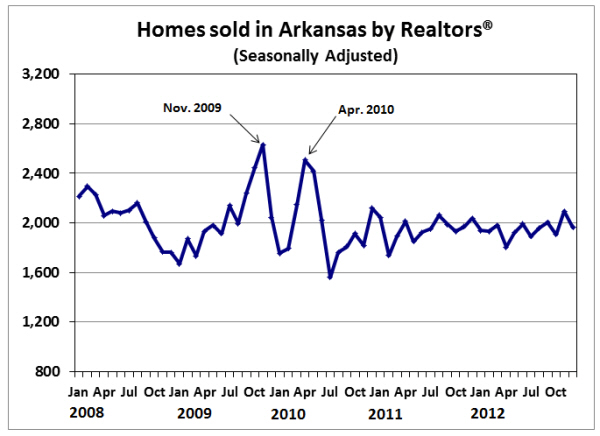 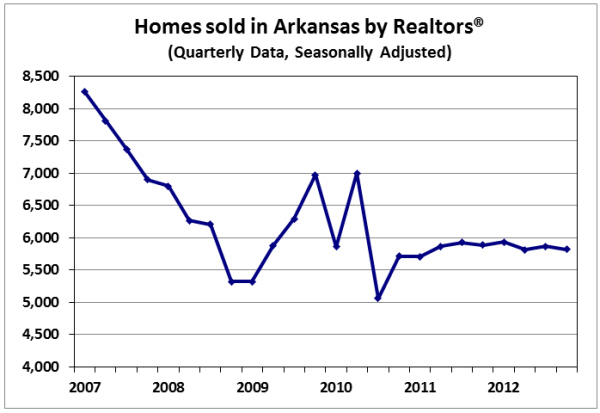 The release of sales data for November and December was, in some sense, anticlimactic — the final two months are typically among the slowest sales months of the year, so there was little chance of a substantial year-end surprise.  Sales during the peak summer months of 2012 had already shown that annual totals would be little-changed from the previous year.

Looking ahead to 2013, there are reasons to be cautiously optimistic:  Financing rates remain at all-time lows, home prices have appear to have bottomed-out, and general economic conditions continue to improve (albeit slowly).  Foreclosures and distressed sales will continue to be a negative factor, since foreclosures add to available inventory and tend to put downward pressure on prices.  Nevertheless, this is likely to be less of a drag on home sales over time as the pace of foreclosure activity continues to slow.  Overall, our forecast for home sales in 2013 remains a modest increase of about 6%.