The unemployment rate in Arkansas declined by 0.2% to 7.1% in September.  According to the news release from the Bureau of Labor Statistics, 44 states plus D.C. saw unemployment declines, with only 6 states seeing increases.  Compared to September 2011, the unemployment rate in Arkansas is down by 1 full percentage point.  The U.S. rate is down 1.2% from a year earlier.  The number of unemployed Arkansans fell by 1,877 to 98,276 — the lowest level since February 2009.  The household survey also showed a decline in the number of unemployed (-759), so the Arkansas labor force also contracted for the month. 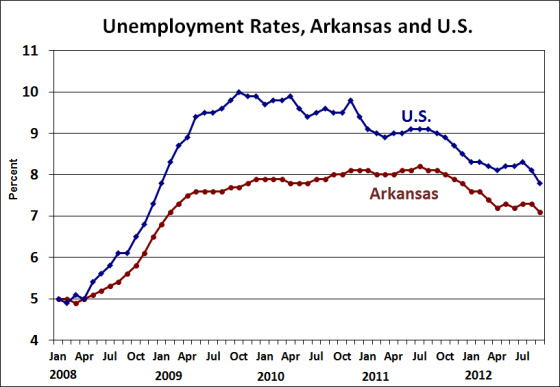 The payroll survey showed a net job loss for the month (seasonally adjusted).  Before seasonal adjustment, the number of payroll jobs was up by 12,300; however, that increase primarily reflects the seasonal return to work at public schools and universities.  After seasonal adjustment, the month-to-month change was -2,600.  Changes in industry employment were mixed.  Relatively large increases were recorded in Education and Health Services (-1,800), Financial Services (-600), and Professional and Business Services (-600).

Compared to a year earlier, employent was up by 10,800 with gains concentrated in several service-providing sectors.  Since the employment trough of February 2010, total payroll employment was up 15,700.  As of September, employment was still 42,000 lower than its pre-recession peak. 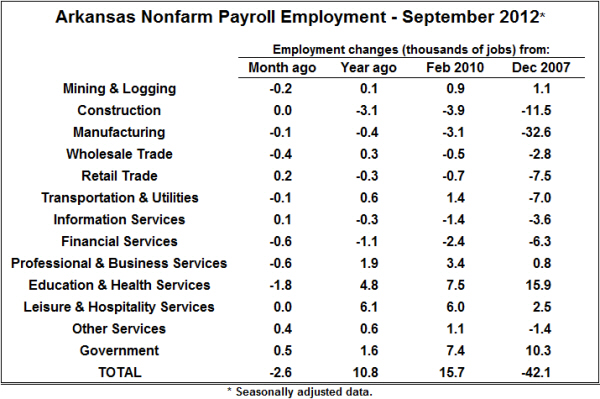 Recently released statistics — including those for September 2012 — have shown disappointing progress toward recovering the jobs lost during the recession.  However, when data revisions are eventually factored into the current employment statistics, the picture is likely to be far more encouraging.  (See, Arkansas Employment and Unemployment – June 2012).  More details and updates to the expected data revisions will be presented at the 2012 Arkansas Economic Forecast Conference.