Arkansas Employment and Unemployment – May 2018

The May data on employment and unemployment in Arkansas continues to suggest that we’ve been through a period of weakening in the state’s labor markets.  However, the latest report from the Bureau of Labor Statistics also included some encouraging signs of of improvement. 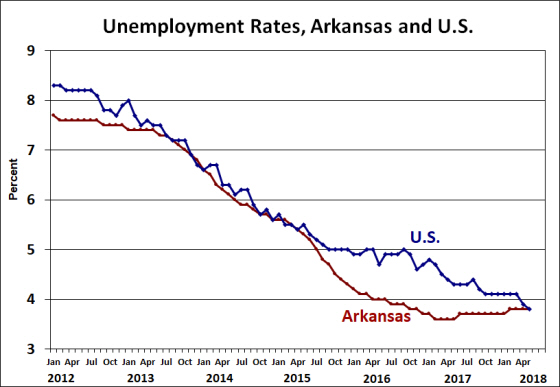 However, recent weakness in employment is evident in the components of the unemployment rate.  Data from the household survey shows that the number of employed Arkansans was down for the eighth consecutive month and has now dropped below 1.3 million for the first time since early 2017.  The weakness in employment also shows through to labor force participation, which has also declined for eight months.  One bright spot is the number of unemployed, which ticked downward slightly in May after creeping upward during the previous four months.  With the most recent observation included, the trend suggests that the number of unemployed is fairly stable at just over 50,000. 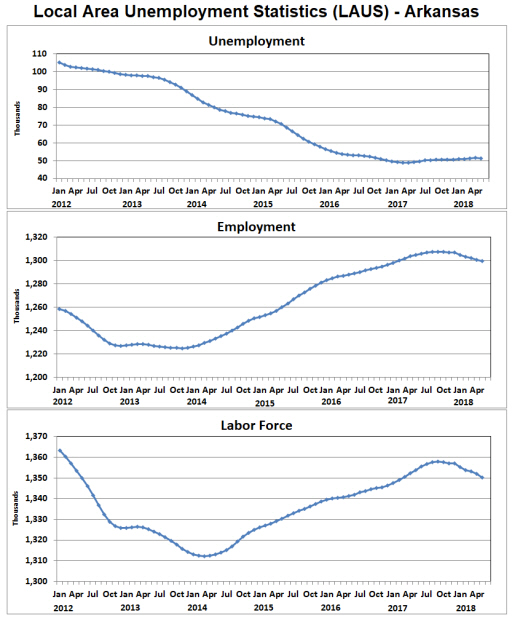 Payroll Employment
Nonfarm payroll employment showed a healthy gain of 3,700 in May (seasonally adjusted*).  The fact that the year-over-year increase in payrolls is only 6,600 demonstrates that the May increase represents an acceleration from the recent pace of job growth.  Over the first five months of 2018, payroll employment has increased by 6,200 — more than offsetting the 4,900 decline reported for the final two months of 2017.  Nevertheless, employment in Arkansas is expanding at a substantially slower pace than the national average.  In percentage terms, Arkansas payroll employment has increased by 0.5% over the past 12 months, while national payrolls have expanded at a 1.6% pace. 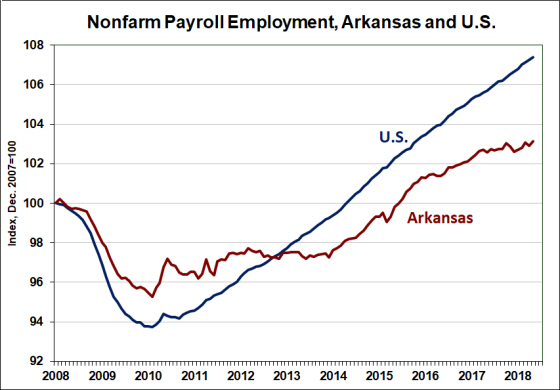 The breakdown of employment growth by sector shows some continued weakness in service-providing sectors with monthly declines in Financial Services, Professional & Business Services, and Other Services.  Employment in Leisure and Hospitality Services was unchanged from the previous month and has shown no significant growth over the past year.  On the other hand, Education and Health Services showed a strong gain of 1,200 jobs in May, primarily in the Health Care and Social Assistance component.  Another encouraging figure is the growth of Manufacturing employment — up by 800 jobs in May and up 3,500 from a year ago.  In fact, growth in Manufacturing employment accounts for over half of the state’s job growth over the past 12 months.  Both the Durables and Non-durables components of manufacturing employment have been increasing, up by 1,200 and 2,300 jobs, respectively. 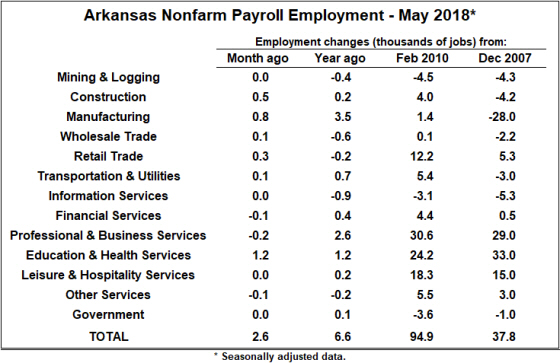