Arkansas Employment and Unemployment – May 2015

Arkansas’ unemployment rate was unchanged at 5.7% in May.  After having edged down to 5.6% for the first three months of the year, the state’s unemployment rate now stands at the same level as it did in November of 2014.  Compared to a year ago, however, the rate is down one-half of a percentage point.  The national unemployment rate was 5.5% in May.  With rates now in the neighborhood of 5 to 6 percent, unemployment is approaching the “full employment” level and significant further declines are likely to materialize slowly. 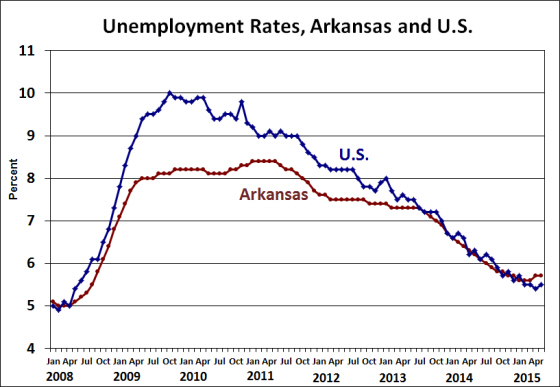 Although the unemployment rate was unchanged in May, the number of unemployed increased by 673 — the third consecutive monthly increase.  On a more positive note, the number of employed Arkansans was 972 higher than the previous month.  Over the past 19 months, the employment count from the household survey has increased by 51,521. 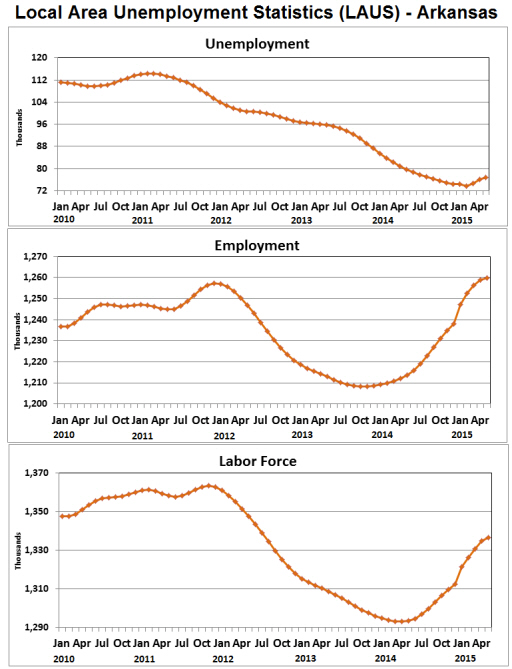 Payroll Employment
Total nonfarm payroll employment was up by 1,300 in May (seasonally adjusted).  Added to the 6,500 increase from the previous month, May’s increase brings employment back to its level of February — offsetting a sharp weather-related drop in March.  Compared to its pre-recession level (from December 2007), Arkansas employment is now up by 2,300 jobs (0.2%).  By comparison, nationwide employment surpassed its pre-recession level in April 2014, and is now up by an additional 2.4%. 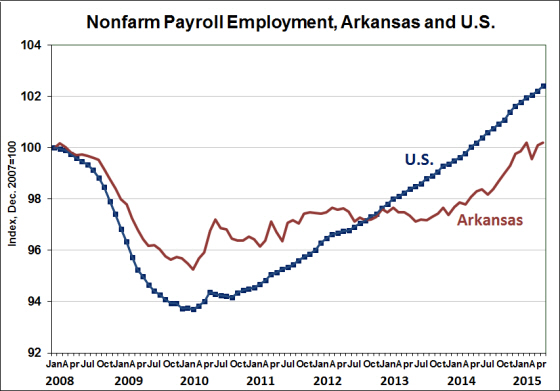 The May report showed declines in the major good-producing sectors, along with Transportation & Utilities and Financial Services.  Other service sectors saw employment gains, particularly Education & Health Services.  Since the employment trough of February 2010 only three sectors have shown further net declines:  Mining & Logging, Manufacturing, and Government.  However, many of the sectors that have expanded since then are still registering lower employment totals than before the Great Recession.  Manufacturing and Construction remain the weakest sectors in that regard.  Combined, employment in goods-producing categories (including Mining & Logging) is down 42,600 since December 2007. 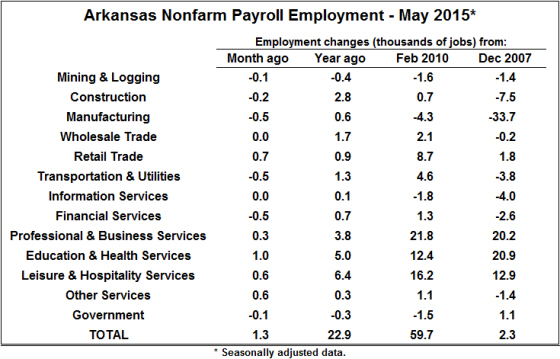