Arkansas Employment and Unemployment – May 2011

The unemployment rate in Arkansas ticked upward in May, rising from 7.7% to 7.8%.  According to data from the Bureau of Labor Statistics and the Arkansas Department of Workforce Services (DWS), the household survey showed that the number of unemployed rose by over 1,100 while the number of employed dropped 4,800.  This was the second consecutive monthly decline in the number of employed following a string of increases since July 2010.  DWS Communications director Kimberly Friedman pointed out that the uptick in the unemployment rate and the decline in the labor force “mirrors the trend seen at the national level.”   It is also likely to reflect disruptions due to severe weather conditions in Arkansas during late April and May.

The figures for nonfarm payroll employment from the establishment survey also showed a contraction in the total number of jobs in May, down 5,400 (seasonally adjusted).  As shown in the chart below, the May reading fits the recent pattern of month-to-month volatility.  From a longer-run perspective, however, the latest monthly observation provides little indication of any change in the trend of positive job growth that has prevailed since February of 2010. 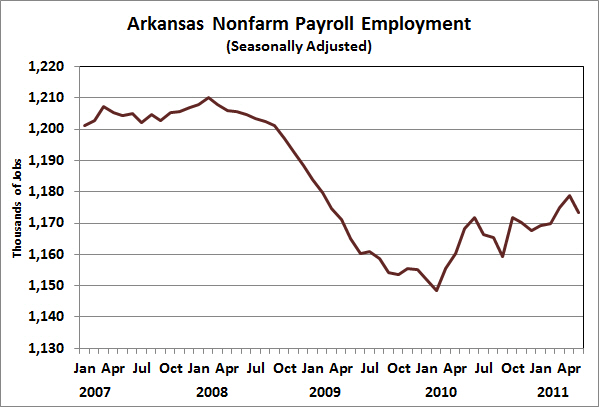 Job losses in May were concentrated in two sectors:  Trade, Transportation, and Utilitites (TT&U); and Professional and Business Services (P&B).  In the broad TT&U sector, the raw data showed only a slight decline in jobs (-200).  However, employment in this sector typically expands during May so the seasonally adjusted figures show a decline of 3,100 — with much of the loss concentrated in Retail Trade (-1,800).  In the P&B services sector the number of jobs was down by 2,400 (seasonally adjusted) with the losses concentrated in Administrative & Support Services (-1,700).  The Administrative and Support subsector includes temporary positions arranged through employment agencies–so while it has shown some of the largest gains over the past year (+2,900) it is one of the first areas to show job losses in a temporary employment contraction (-1,400 in May). 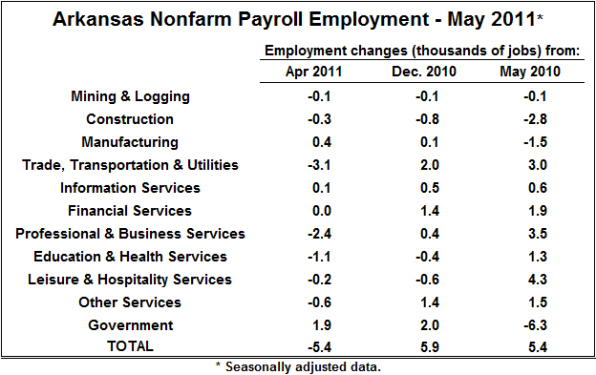 The tornadoes and flooding that hit many parts of the state during April and May are likely to have suppressed employment growth temporarily, but should have little lasting effect.  In fact, recovery efforts are likely to provide some support for job growth in coming months — particularly in the construction sector.  Underlying growth trends are also likely to result in a rapid recovery in the Administrative & Support Services sector.  The key sector to monitor in June will be TT&U, which accounts for a large share of total employment in Arkansas.  If the factors underlying the weak employment report for May are indeed temporary, we should see robust recovery in this sector.  Continued stagnation in this sector would be a sign of more fundamental economic weakness.