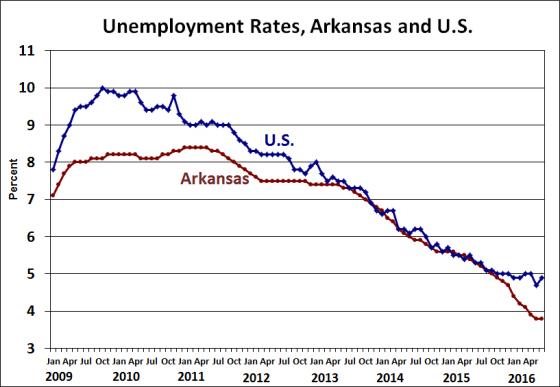 The changes in employment and unemployment that underlie the unemployment rate calculations were not particularly striking in their magnitude, but do represent a departure from recent trends.  The number of employed declined by more than 3,100 after a string of 29 consecutive months of growth.  The number of unemployed increased by only 344, but it was the first monthly increase in the number of jobless Arkansans since February 2011. 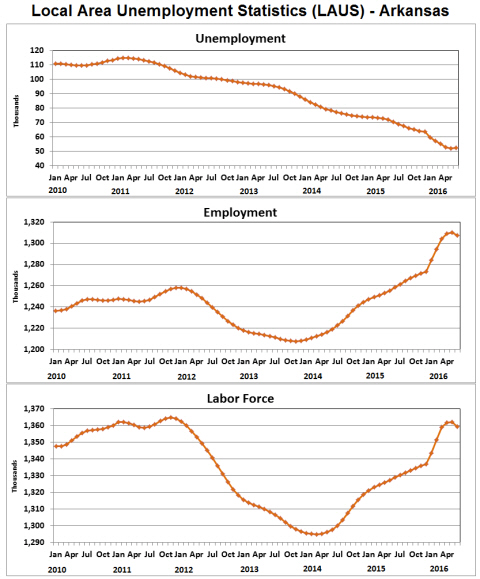 Payroll Employment
Nonfarm payroll employment increased by 400 in June (seasonally adjusted) and the figure for May was revised upward by 300.  Nevertheless, the level of payroll employment in June was essentially unchanged from December 2015.  The sharp contrast between payroll employment growth over the past 6 months (-100) and the employment gains measured by the household survey (+33,657) is striking.  It is not unusual for the two separate data sources to diverge, but such a large and persistent gap raises questions about measurement problems.  Both employment series are subject to future revision, but the payroll statistics are generally considered to be the more accurate of the two measures.  Combined with the fact that the increases in household employment took place in an unprecedented three consecutive months of 10,000+ increases (January through March), we remain somewhat skeptical of the validity of recent unemployment rate statistics. 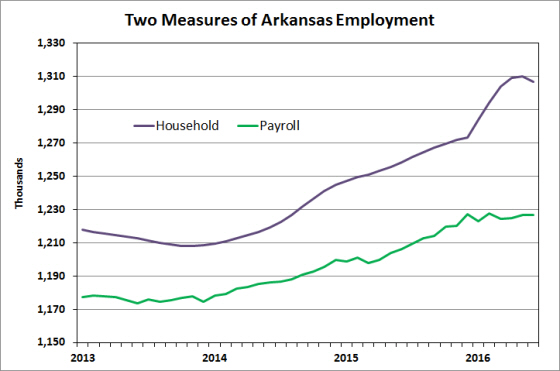 A breakdown by sectors shows that payroll employment shows gains in most sectors, particularly the service-providing sectors.  A prominent exception was Education & Health services, which declined by 1,300 jobs after expanding 7,400 in the previous 12-month period.  Retail Trade was another sector showing a setback from previous growth trends.  Professional & Business Services continues to be the fastest growing sector, increasing by over 28,000 since the employment trough of February 2010.  Growth in Professional & Business Services has accounted for over one-third of all job growth during this economic expansion. 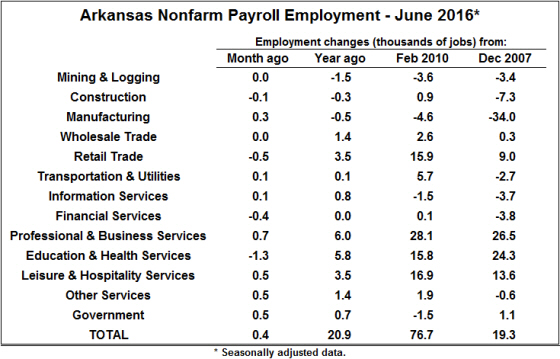