However, the other component of the unemployment rate, the number of employed,Â continues to be a source of concern.Â  The household-survey measure of employment fell by 6,700 in June, bringing the cumulative 3-month declineÂ to nearly 14,500.Â Â  As a result of these changes, the labor force fell by 9,300 for the month, and has fallen by more than 24,600 over the past three months. 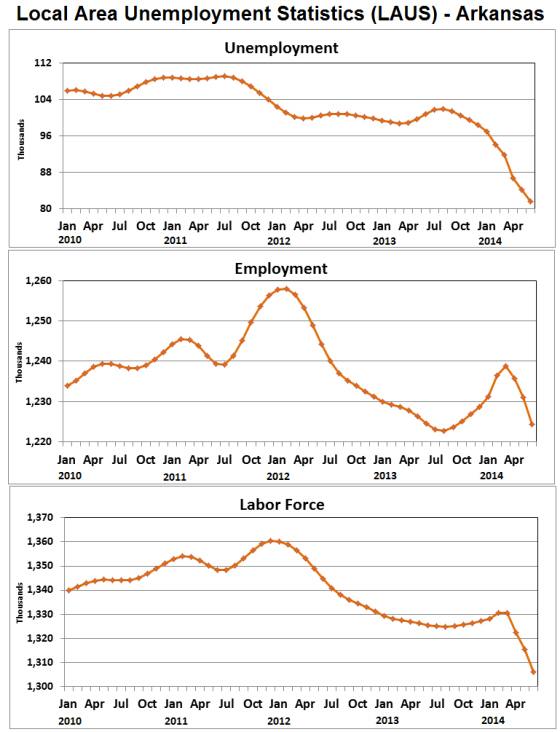 Recent data demonstrate that a decline in the unemployment rate cannot always be interpreted positively.Â  If, in fact, the decline in the number of unemployed reflectsÂ discouraged workers dropping out of the labor force, then the falling unemployment rate might be a misleading signal.Â  For example, suppose that the decline in unemployment over the past three months was entirelyÂ attributable to theÂ discouraged-worker effect:Â  If we assumedÂ that those 10,234 ArkansansÂ remain unemployed in a true sense of the word, then the measured unemployment rate in JuneÂ might be moreÂ appropriately calculated asÂ 7.0%.Â Â  The sweeping assumption that unemployed workers are giving up on their job searches is surely an exaggeration, and the data are subject to future revision.Â  But as it stands now, the sharpÂ contraction ofÂ the Arkansas labor force that we’ve seen over the past three monthsÂ is a cause for concern.

Payroll Employment
Data from the survey of employers reinforces concern about weak employment growth.Â  Nonfarm payrolls were down 3,300 in June (seasonally adjusted).Â  Payroll employment remains more than 14,000 higher than a year ago, but most of those gains occurredÂ during the latter part of 2013.Â  Over the first 6 months of this year, employment has increased by only 1,700.

As shown in the table below, employment declines hit every category of service-providing sectors.Â  The largest declines were in Professional & Business Services and Education & Health Services — two areas that have previously been showing strong growth trends.Â  The news was more positive in the goods-producing sectors.Â Â Manufacturing employment surged by 1,700, and employment in Construction increased as well.Â  Despite recent gains, employment in both Manufacturing and Construction remain lower than they were at labor market trough in February 2010, and together those two employment categories account for cumulative job losses of over 41,000 since the start of the 2008-09 recession. 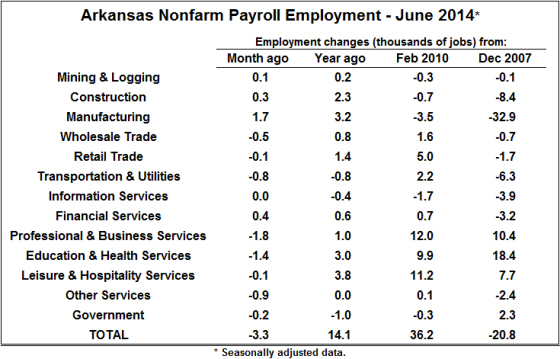 *Seasonally adjusted data for Arkansas nonfarm payroll employment, reported in a format compatible with the monthly news release from the Arkansas Department of Workforce Services, can be found here:Â  Table-Seasonally Adjusted NFPE.

Arkansas Economic Outlook (March)
“It appears that a dramatic downturn in economic activity over the remainder of 2020 is unavoidable for the nation and for Arkansas.”Â  Read more…