The August report on state-level employment showed that Arkansas’ unemployment rate was 3.4%, the same level as in the previous month.  The national unemployment rate was also unchanged at 3.7%, so the Arkansas rate remained 0.3% lower than the national average (a difference that is too small to be statistically significant).  The August household survey showed a slight decline in the  number of employed (-832) but that was the first monthly decline so far this year, with the previous 7 monthly changes averaging an increase of 1,870.  The number of unemployed was essentially unchanged in August (-41). 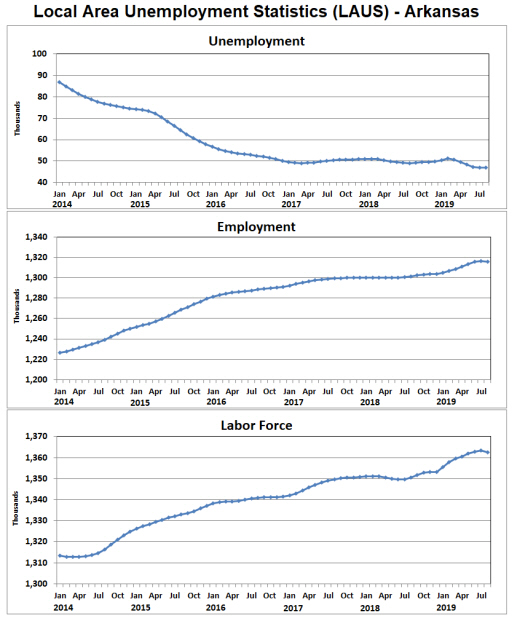 Payroll Employment
Nonfarm payroll employment increased by 2,300 in August, with an upward revision to July’s figure adding another 1,100 to the cumulative total for the year (seasonally adjusted).  Over the past 12 months, payroll employment has increased by 15.6%, a gain of approximately 1.2%.  According to the monthly report from the Bureau of Labor Statistics, Arkansas is one of 26 states where the year-over-year gain in employment was considered statistically significant.

As shown in the table below,the bulk of the job gains in Arkansas were associated with Manufacturing, up by 1,800 jobs — a monthly gain of 1.1% that offset declines from the previous three months.  Over the past year, employment in manufacturing has increased by 3,900, or 2.4%.  Monthly changes in the service-providing sectors were mixed:  expanding sectors included Financial Services, Professional and Business Services and Education & Health Services.  Leisure & Hospitality Services and Other Services were down for the month, as was Retail Trade. 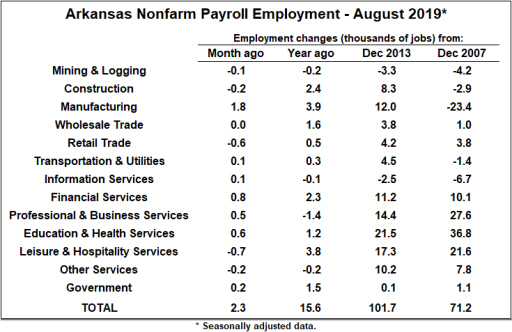 It is notable that both the household survey and payroll survey data are revealing similar trends in employment growth.  For the past four months, both measures have reported year-over-year changes in the range of 1.1% to 1.3%.   Over the past five years of relatively steady employment growth in Arkansas, the household and payroll survey measures have averaged growth rates of 1.2% and 1.4%, respectively. 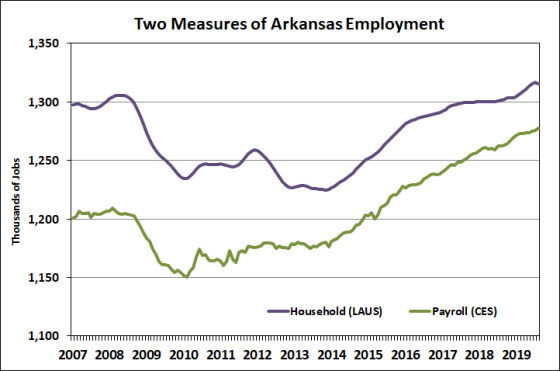