The Arkansas unemployment rate rose for the fourth consecutive month in August, up one-tenth of a percent to 8.3%.  According to the Bureau of Labor Statistics (BLS), Arkansas was one of 26 states that saw a rise in the unemployment rate in August.  The statistics from the household survey showed that the number of employed was down 3,148 while the number of unemployed was up by 1,193. 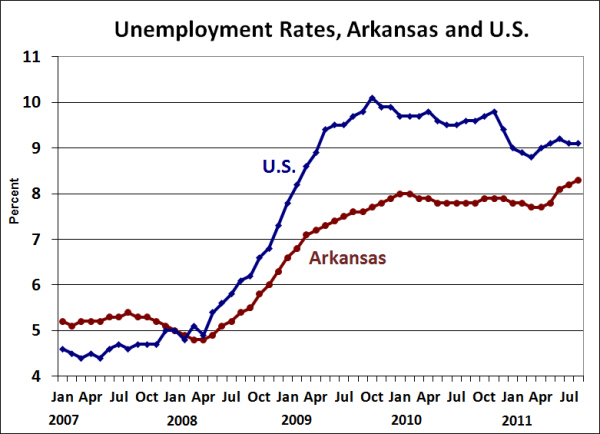 The payroll survey was also disappointing.  Seasonally adjusted data for August showed a decline of 1,900 jobs, on top of a downward revision to the July data.  After peaking in April, payroll employment has declined by 7,000 jobs in the past four months.  The table below shows that job losses in August were widespread.  The only sectors that showed positive monthly growth were Government (+3,000 jobs) and Manufacturing (+400).  Losses were particularly sharp in Professional and Business Services (-1,700) and Construction (-1,900).  Employment in construction had shown a sharp increase in July, but the August figures erased that gain. 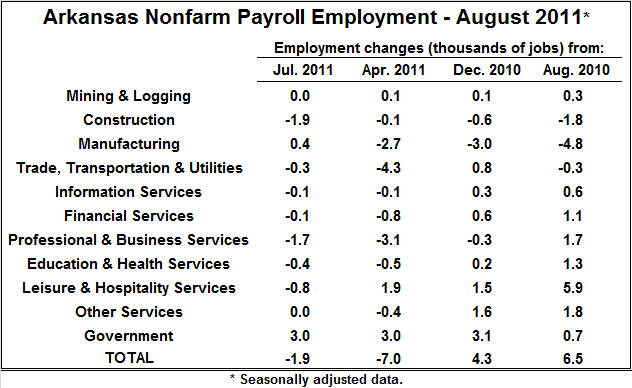 It is never advisable to put too much emphasis on one month’s data, or on any one particular statistic.  But today’s employment report is the fourth consecutive report indicating weakness in Arkansas’ job market.  Data from both the household survey and and payroll survey suggest that conditions have deteriorated markedly since April.