At the Arkansas State University Economic Outlook Conference today, we presented revised and updated forecasts for some key economic indicators for the Arkansas economy.  At the time that the original forecasts were complied in late October 2011, data for some series were available only through the first half of the year (e.g., personal income).  Some of the statistics that were available through the third quarter have subsequently been revised (particularly employment data).  Hence, the original projections for 2012 and 2013 incorporated forecast estimates of how 2011 would turn out.  Now that we have at least preliminary data for all of 2011, it seems a propitious time to revisit the forecasts.

In general, the data have confirmed our expectations that 2011 would show a slowdown in the pace of  the economic recovery overall, but with clear signs of improvement in the final months of the year.  In some cases, our expectations for improvement in the waning months of 2011 were exceeded — in other cases our outlook was overly optimistic.  Accordingly, the forecast revisions are mixed. And the outlook — in broad strokes — continues to be one of steady but unremarkable growth as we slowly emerge from the aftermath of the 2008-09 recession.

Personal Income
Yesterday’s data-release from the Bureau of Economic Analysis showed that total Personal Income in Arkansas grew by 3.7 percent in 2011 (Q4/Q4).  This fell closely in line with our forecast of 3.6% growth for the year.  Hence revisions to the outlook are minor.  Due, in part, to lower-than-expected transfer payments in the second half of 2011, the forecast for personal income growth in 2012 has been revised down from 5.1% to 5.0%.  The forecast for 2013 is unchanged at 3.9%. 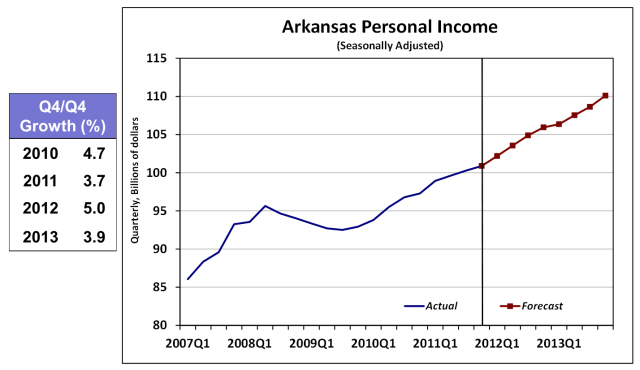 Arkansas Taxable Sales Including Gasoline
Our proxy for state retail sales, Arkansas Taxable Sales Including Gasoline (ATSIG), finished 2011 with a Q4/Q4 growth rate of 5.0% — slightly higher than the 4.4% rate in the forecast.  Some of this strength is expected to continue into 2012, prompting a slight upward growth revision from 3.2% to 3.3%.  (The slowdown from 2011 reflects, in part, the expectation of slightly lower inflation rate.)  Our original forecast included a (somewhat anomalous) slowdown in growth for 2013 (2.0%).  Such a slowdown now appears less likely, and we are now forecasting 2013 growth of 3.9%. 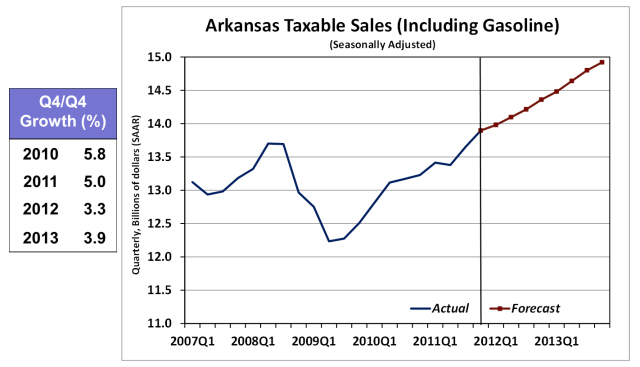 Home Sales
Arkansas home sales had been steadily improving during 2011 (on a seasonally-adjusted basis), but after having been supported by home-buyer tax credit programs in the previous two years, 2011 was still expected to be have the lowest total annual sales volume in recent memory.  Sales in the last three months of the year were fairly strong, but were somewhat below our expectations.  Compared to the previous year, total sales volume was down slightly more than forecasted: down 2.5% from the previous year’s (revised) sales figures.  Carrying this weakness forward into the projected sales trajectory, the forecasts for 2012 and 2013 have been revised downward.  Expectations of a double-digit growth rate in 2012 have given way to a revised forecast of +7.5%.  Sales are still expected to improve by 4.3% in 2013, but end the year with a lower sales volume than previously forecasted. 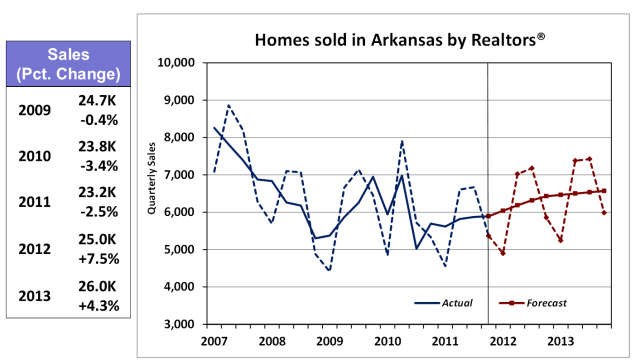 Payroll Employment
At the UALR Arkansas Economic Forecast Conference, we predicted that downward revisions to the payroll employment data would show that the year would end with a lower level of employment than the previous year — in sharp contrast to data that was available at the time.  The actual data revision was slightly larger than anticipated, showing a Q4/Q4 employment loss of 0.4%, rather than the 0.2% that had been forecasted.  Nevertheless, relatively strong job growth did materialize in the fourth quarter of 2011, as anticipated.  Accordingly, the growth path for employment has not been revised (+1.3% in 2012 and +1.5% in 2013), but the path has been benchmarked to a slightly lower starting point. 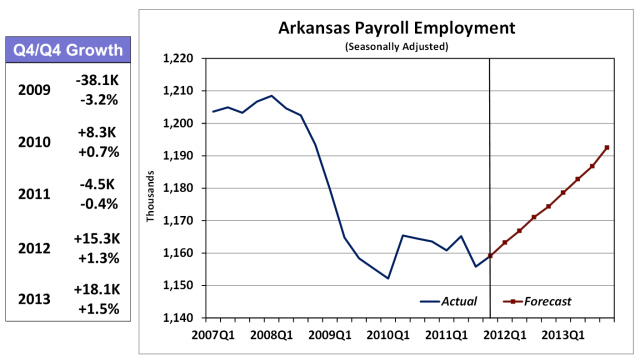 Unemployment Rate
Unemployment rate data for 2011 were also recently revised.  The updated statistics showed that unemployment was not quite as high in mid-2011 as previously estimated.  Moreover, the rate dropped over the last three months of the year much more rapidly than expected.  Consequently, our unemployment rate forecasts have been revised downward significantly.  2011 ended with a rate of 7.9%, instead of the expected 8.2% rate.  The downward trajectory of unemployment has been adjusted downward from this lower starting point.  We now expect the unemployment rate to average 7.4% in the fourth quarter of 2012 (instead of 7.9%) and to fall to 7.0% by the fourth quarter of 2013 (instead of 7.6%).  These would be welcome developments, if realized.  The risk to this revised forecast is that new entrants and re-entrants to the labor force might put upward pressure on the unemployment rate as the labor market continues to improve. 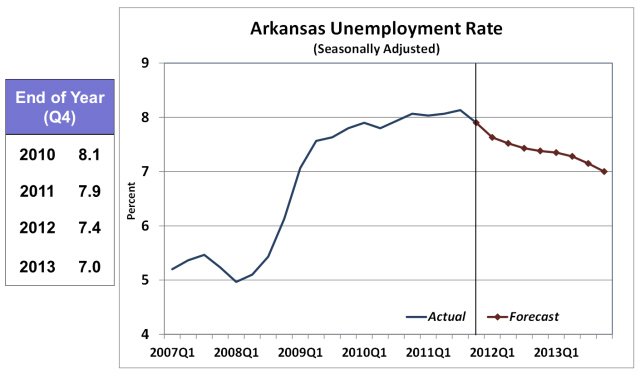 Methodological Note:  The original forecasts of November 2011 were produced using the Moody’s Economy.com Arkansas model, benchmarked to a composite of national economic forecasts.  The revised projections presented here represent adjustments to the original forecasts in light of new and revised data.   Underlying forecast assumptions and model estimates were not generally re-evaluated as a part of this exercise, but updated model forecasts for the unemployment rate and retail sales were factored into the analysis.