This Year’s “Forecasting a Revision of History”

One of the more upbeat prognostications from the 2012 Arkansas Economic Forecast Conference was the prediction that revisions to the employment data will ultimately show much stronger job growth in Arkansas than reported in the currently-published data.  Due to the nature of the expected revisions, this prediction is also somewhat tricky to interpret.  Hence this more detailed explanatory note is in order.

The monthly statistics on payroll employment–the Current Employment Statistics (CES) — are among the most timely and revealing economic indicators available at the state level.  However, they are based on a sample survey of employers, so they are subject to sampling error.  Moreover, important pieces of missing information involves the rate of new business formation and the closure of failed firms.  The Bureau of Labor Statistics estimates the effect of these changes with a “birth/death model.”  Particularly in times of economic turmoil, even the best modeling can end up being far off the mark.  The CES is also subject to a number of other non-sampling errors.

Once per year, the BLS revises the CES data with the more accurate statistics from the Quarterly Census of Employment and Wages (QCEW).  Based on records from state unemployment insurance offices, the QCEW is very comprehensive, covering 98% of all U.S. jobs.  Because it is so comprehensive, however, it is only available after a fairly long lag.  Data for the first quarter of 2012 only came out at the end of September.  These first quarter data will be used to revise the CES data in the annual “Benchmark Revision” process.

The benchmark revisions will not be completed until after the release of monthly CES data at the end of the year, but there is enough information available at this time to make a fairly accurate estimate of what the revision process will reveal.  In recent years, the revisions have been substantial  (see here and here, for example).  The next benchmark revision is expected to reveal a large upward revision to the total employment count in Arkansas.

The chart below illustrates the magnitude of the expected revision.  The revised data projections diverge from currently-published figures in July 2011, with a net increase of 9,700 jobs.  The largest monthly revision is for October 2011 — amounting to nearly 19,000 jobs.  Because the QCEW data extend only through March 2012, job growth for April through September is unrevised, so monthly changes are simply appended to the revised data. 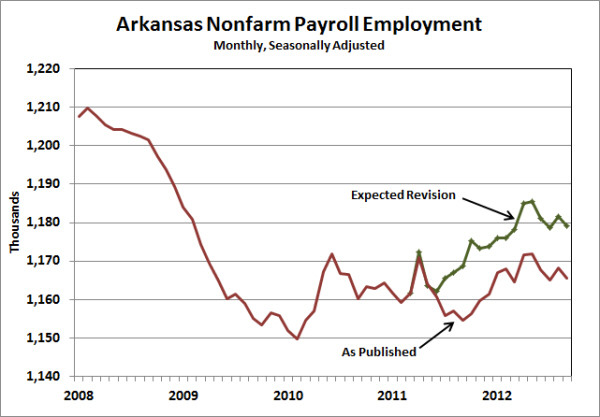 Because of the timing of the revisions, the next benchmark revision will show substantial upward adjustment of job growth in 2011.  As a result, the net increase in employment in 2012 will actually be revised downward.  Nevertheless, this downward revision in growth represents a large upward shift in the number of jobs at any particular point in time.   The revisions are expected to raise 2011 job growth from -3,100 to +9,400, an upward revision of 12,500 jobs.  With employment expected to be so much higher at the end of 2011, job growth data for 2012 will actually be lower than current data are showing.  For example, year-over-year growth through September 2012 is currently reported at +10,800, but is likely to be revised to +10,300.

As of September 2012, the benchmark revisions are expected to raise the level of employment by 13,500 jobs.  Estimating the expected benchmark revisions sector by sector, the new data will show a mix of changes — as detailed in the table below (using quarterly-average data).  Some of the larger upward revisions include Professional & Business Services, Retail Trade, and Construction.  Not all sectors will be revised upward, however.  For example, the revised data are expected to show lower government employment, particularly at the state and local level. 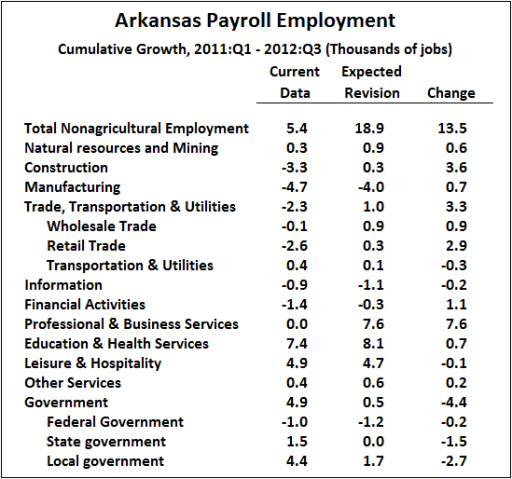 The actual benchmark revision process involves far more detail than the rough estimates presented here.  Nevertheless, the simple log-linear regression techniques we have used to estimate the benchmarking have turned out to be quite accurate in the past.  The official revisions will not be available until March 2013.  So in the meantime, data from the CES will need to be interpreted in light of this yet-to-be-incorporated new information.  Although it adds complexity to the interpretation of the data, we’ll be providing that analysis here on the pages of the Arkansas Economist in coming months.  As an illustration of how the expected revisions change the monthly tracking of job growth, the following two tables compare the September jobs report using currently-published data and expected-revised data. 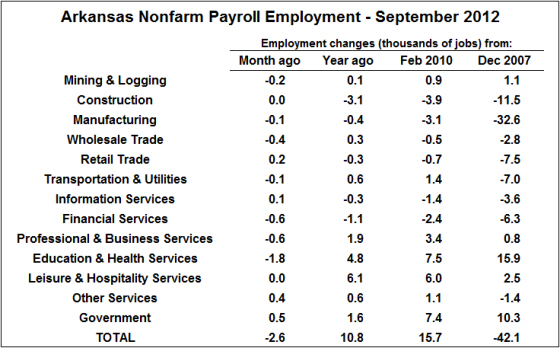 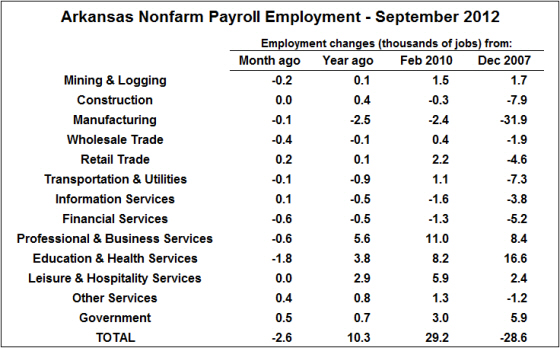 Source: Bureau of Labor Statistics; revisions estimated by the Institute for Economic Advancement

The most recent month-to-month changes are unaffected by the revision.  The year-over-year figures for total employment growth are revised downward, as described earlier.  Perhaps the most striking difference between the two tables is the column showing cumulative growth since the employment trough-date of February 2010.  The unrevised data show total growth of 15,700 jobs — about one-quarter of the total number of jobs lost during the recession.  After revision, however, the new cumulative job growth total is 29,200 — an increase that represents over half of the recessionary job losses.  Given the projected employment growth embodied in the forecast for 2013 and 2014, this revision makes it likely that we will reach the point of total employment equal to the pre-recession peak by sometime in early 2014, rather than at the end of 2014 as projected using the unrevised data.