The Bureau of Economic Analysis released state-level GDP estimates for 2011 this morning.  The data show that Arkansas GDP grew at a relatively modest rate of 0.3% last year.  The comparable growth rate for the U.S. was 1.5%.  Arkansas’ growth rate ranked #39 in the nation. 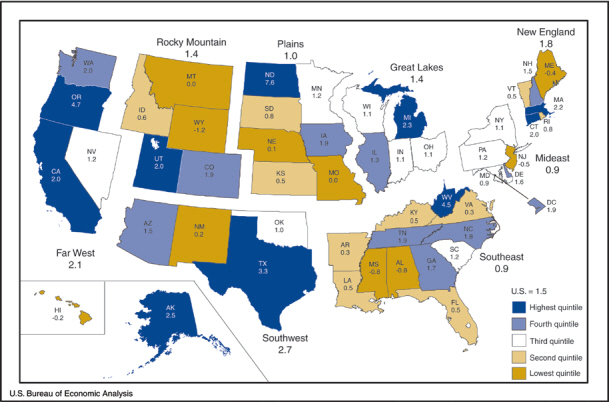 The breakdown of growth rates by sector reveal a clear source of the relative weakness in Arkansas’ economy in 2011:  Agricultural output (including forestry, fishing and hunting) declined by over 16% last year.  The direct contribution to the state’s GDP growth was a reduction of nearly 0.5 percentage points.  In a state like Arkansas where agriculture comprises a relatively large share of economic activity, weakness in the agricultural sector generates secondary, induced effects in other areas of the economy. 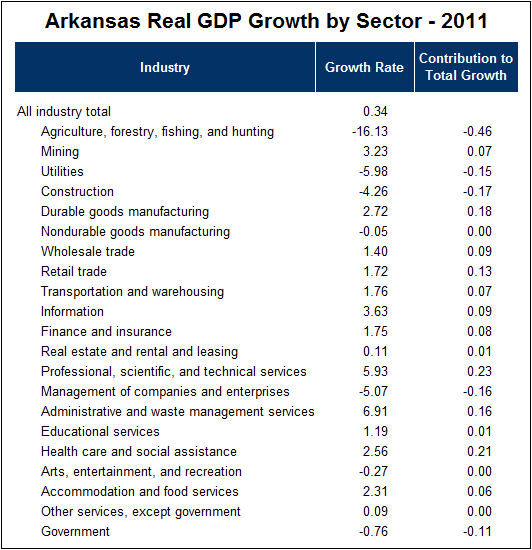 Weather conditions in Arkansas during 2011 were suboptimal to say the least — spring storms and flooding, followed by summer heat and drought, were responsible for a sharp drop in farm incomes.  The good news is that weather is temporary, so the relative slowdown in Arkansas economic growth during 2011 is unlikely to be a persistent problem.

The new report also included revisions to state GDP figures for the previous four years.  As indicated in the chart below, the revised figures show that the recessionary downturn in 2009 was far larger than previously reported.  The revised figure of -2.9% is nearly twice as large as the estimate published last year (-1.5%).   On the other hand, the latest data show a sharper rebound in economic activity during 2010.  The new figures show an expansion of 2.5%, revised upward from the previously-reported rate of 2.3%. 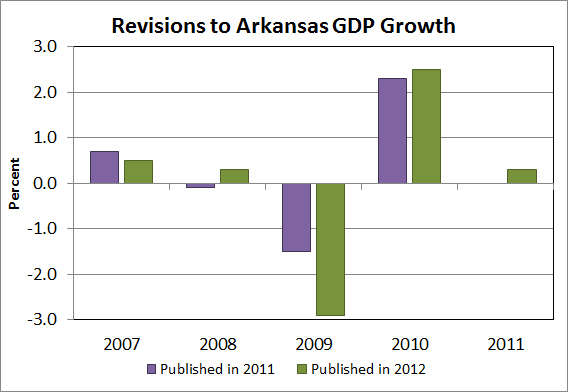 Today’s GDP report is consistent with other sources of information (e.g. employment, personal income, taxable sales) that indicated a slowdown in the pace of the economic recovery in Arkansas last year.  These indicators have been showing noticeable improvement for the latter part of 2011 and the first part of 2012, suggesting that the GDP slowdown last year represented only a temporary setback.