September data on Arkansas employment and unemployment were released by the Bureau of Labor Statistics (BLS)  this morning.  The report provides mixed signals.

On the other hand, the payroll survey showed a large decline in the number of Arkansas jobs.   The new data show a seasonally-adjusted decline of 7700 jobs in September.  Moreover the number for August was revised down by 1600 jobs.  By this measure, the trend of stabilizing employment would seem to have collapsed.

Generally speaking, the payroll numbers are more accurate and provide more detail on labor market conditions.   However, they are also subject to significant revisions from month to month, and undergo a major benchmark revision in the spring of each year.  We may find that the September payroll employment report is a statistical fluke.  Nevertheless, we should not dismiss the numbers just yet.  The discrepency between the two surveys is an indication of the degree of uncertainty that we have regarding the employment outlook for Arkansas. 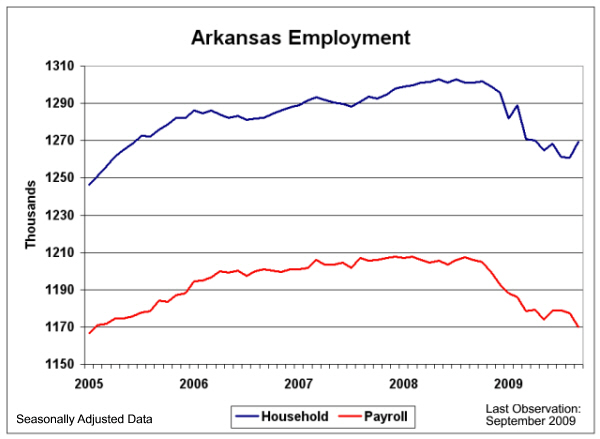 Two Measures of Employment in Arkansas