A New Report on the Arkansas Economy from the St. Louis Fed

During my interview on Unconventional Wisdom, the show’s host – David Sanders – mentioned the St. Louis Federal Reserve Bank’s “Burgundy Book.” It just so happens that the latest editions of the Fed’s four Burgundy Books came out yesterday. The first line of the report for the Little Rock zone summarizes the Fed’s current assessment of the Arkansas economy: “Economic activity … has continued to stabilize since the June report.” (News Release: September Burgundy Book Shows Continued Stabilization in the Little Rock Regional Economy)

In contrast, conditions in the Louisville zone were reported as “mixed.” In the St. Louis zone conditions “ranged from weak to mixed.” In the Memphis zone, economic activity “continued to weaken during the third quarter of 2009.” Relative to these neighboring regions, the summary of Arkansas’ situation is clearly more optimistic.

A bit of background information: The Federal Reserve System puts out a report called the “Beige Book.” (The formal title is “Summary of Commentary on Current Economic Conditions by Federal Reserve District,” but it’s easier to refer to it by the color of its cover.) The Beige Book reports information derived from survey data, reports from members of the Fed’s Boards of Directors, and other informal contacts with businesses on a local level. The Burgundy Books parse that information for the St. Louis Federal Reserve District into separate reports for the district’s four local “zones.”

Here are some highlights of the September report for the Little Rock zone:

Manufacturing and Other Business Activity: “Manufacturing … has begun to expand slightly since our previous report, with a few firms reporting an increase in new hiring activity… Firms in the aerospace, fabricated metal, furniture, and paper product manufacturing industries announced plans to expand operations and hire new workers… Contacts in the service sector reported new hires related to government services or as a result of federal stimulus dollars. However, firms in business support services reported layoffs as they consolidated operations.”

Banking and Finance: “On net, lending activity for commercial and industrial loans decreased slightly, despite a few isolated reports indicating an increase in demand for these loans. Reports on the level of lending to consumers ranged from unchanged to slightly increased… Residential mortgage lending activity decreased slightly, with several contacts indicating that new loan applications and refinancing activity have both slowed since the second quarter. Most contacts reported an increase in delinquencies, although to a lesser extent than earlier in the year. ” 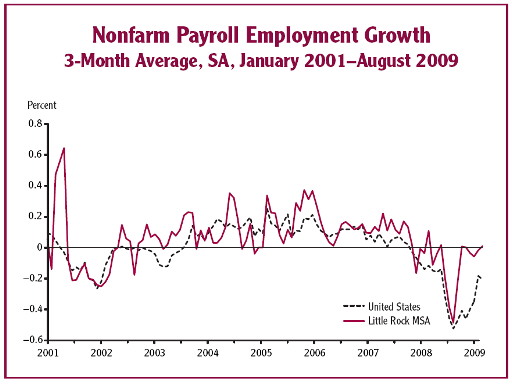 A chart from the Little Rock Zone Burgundy Book

This report reinforces an assessment that I have been seeing in the economic data and hearing from focus groups around the state: Arkansas is poised to recover from this recession in relatively good shape.