Unemployment rates in Arkansas’ metro areas generally remain lower than a year ago, but smoothed seasonally adjusted estimates show recent increases in some areas of the state.

The not-seasonally adjusted unemployment rate data showed that February-to-February changes in unemployment rates ranged from -0.9% in Fort Smith to +0.1% in Memphis (Memphis is the only metro area that showed a year-over-year increase).   According to the news release from the Bureau of Labor Statistics, unemployment rates were lower in February than a year earlier in 287 of the nation’s 372 metro areas and higher in only 69 areas. 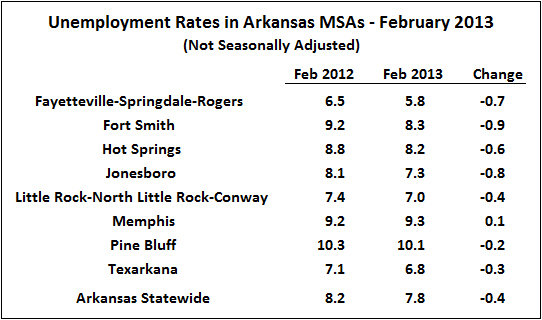 In the most recent report on employment and unemployment for the state, we noted that the Arkansas labor force has been declining precipitously over the past year.  From February 2012 through February 2013, the state’s labor force declined by 2.8% (using not-seasonally adjusted data).  As shown in the table below, not all of Arkansas’ metro areas have experienced comparable declines.  Over the past 12 months, Fort Smith and Jonesboro have both seen increases in the size of their labor forces, while Fayetteville’s labor force is down only slightly.  The state’s largest declines are in Pine Bluff and Texarkana, with Hot Springs and Little Rock also showing contractions that are proportionally larger than the statewide total. 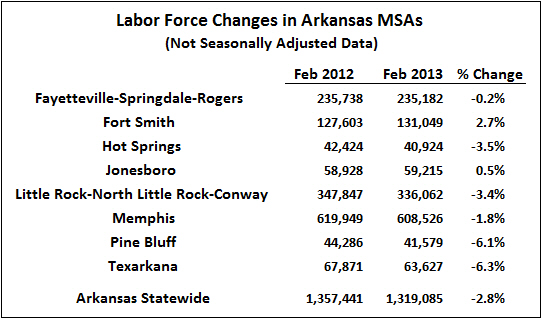 Monthly changes in the Smoothed Seasonally Adjusted Estimates of metro area unemployment rates were mixed:  Rates were lower in Fayetteville and Fort Smith; unchanged in Hot Springs and Jonesboro; and were higher in Little Rock, Memphis, Pine Bluff and Texarkana. 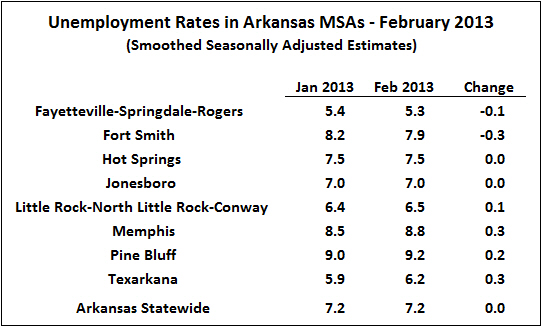 The February changes in unemployment rates contributed to some recent divergence among the state’s metro areas.  For example, the unemployment rate in Fort Smith has now fallen by 0.6% since last October, while the rate in Pine Bluff has risen by 0.4% since September. 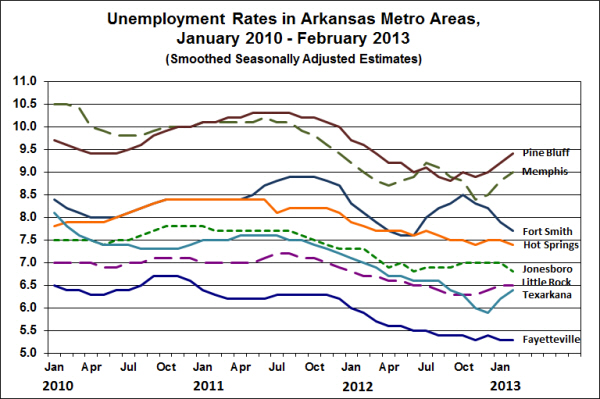 Payroll Employment
Data on nonfarm payroll employment showed month-to-month declines in Hot Springs (-1.0%) and Texarkana (-0.5%), but increases in the state’s other metro areas.  Compared to a year earlier, employment is higher in most metro areas, but down in Pine Bluff and Texarkana.  Pine Bluff is the only metro area that has experienced ongoing job losses since the employment trough of February 2010.  Two metro areas — Fayetteville and Jonesboro — have higher levels of employment now than before the onset of the 2008-09 recession. 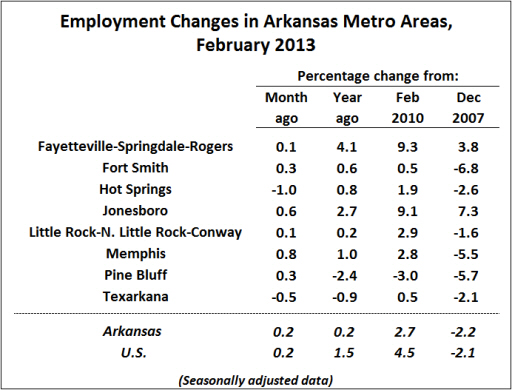