It takes some time to compile comprehensive GDP statistics for the nation’s 366 Metropolitan Statistical Areas (MSAs).  This morning, the Bureau of Economic Analysis released figures for 2009.  Although the numbers are not necessarily representative of more current economic conditions, they provide information about how Arkansas fared during the recession.  In that sense, they also give some indication of how the state’s MSAs were positioned to share in the nationwide economic recovery that began in the latter half of 2009 and into 2010.

As discussed in a previous post, Arkansas’ economy was one of only 10 states that showed positive GDP growth in 2009.  As shown in the Table below, GDP contracted in six of the seven MSAs that have a central city in Arkansas.  Only the Little Rock-North Little Rock-Conway MSA showed positive growth in 2009 (+2.4%).  This suggests that much of the growth revealed in the state-level GDP report for Arkansas was concentrated in the central part of the state.

Although the state’s other six MSAs showed negative growth for the year, each compared favorably to nationwide averages.  The BEA reported that real GDP declined in 292 of the nations 366 MSAs (80%).  On average, the metropolitan areas of the nation contracted by 2.4%.  Jonesboro, the Arkansas MSA that showed the largest decline, contracted at a slightly greater pace.  Jonesboro was also the only Arkansas MSA that fell below the median growth rate.  But even the disappointing performance of GDP growth in Jonesboro is tempered by the observation that its economy had expanded by more than 4% in the previous year (an upward revision from previously-released data).  As shown in the map below, the relatively favorable performance of GDP growth in Arkansas’ MSAs fits within a nationwide pattern.  MSAs that experienced above-average growth tended to be concentrated in the region west of the Mississippi River and east of the Rocky Mountains. 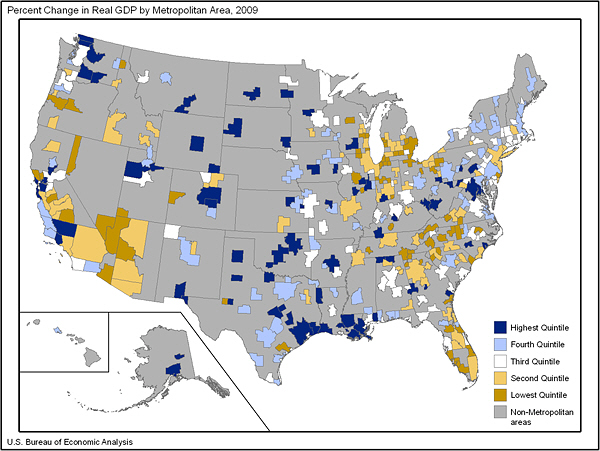 In the state-level GDP report, Arkansas growth was concentrated in some key sectors:  Mining, Information Services and Management Services.  The breakdown of sectoral contributions to GDP growth in Arkansas’ metro areas show similar patterns.  For example, Natural Resources and Mining contributed 0.4 percentage points to growth in the Little Rock metro area.  (This is undoubtedly related to natural gas extraction activities in the northern part of the MSA.)  Specialized service sectors contributed positively to growth across the state.  For example, Financial Activities expanded in Fayetteville, Jonesboro, Little Rock, Pine Bluff and Texarkana.  Professional and Business services provided positive growth in Hot Springs and Jonesboro.  Education and health services expanded in most of the state’s MSAs.

It will be another year before we see statistics for MSA GDP in 2010.  However, the patterns revealed in the 2009 data (along with other, more recent indicators) suggest that a positive economic growth is likely to have emerged for most regions of the state.