The latest employment report for metropolitan areas showed that nonfarm payroll employment expanded in most of Arkansas’ metropolitan area.  The exceptions were Memphis and Little Rock, which were both essentially unchanged.  Employment in Hot Springs, Jonesboro and Pine Bluff increased by 1.0% compared to the previous month, while Fayetteville, Fort Smith and Texarkana saw somewhat smaller increases. 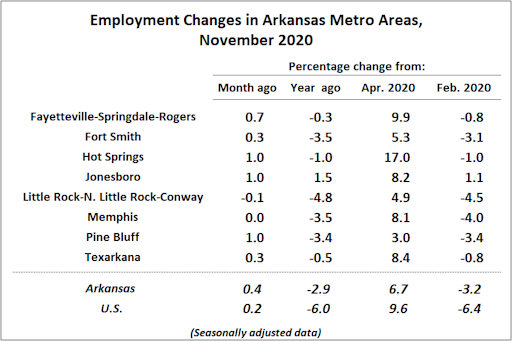 Since the employment trough of April 2020, Hot Springs has shown the strongest bounce-back:  Up 17.0% in seven months.  Hot Springs had previously experienced the largest percentage decline in employment over the February-April contraction.  The smallest percentage recovery has been in Pine Bluff, which experienced a relatively small downturn early in the year but has seen sluggish recovery in the period since April.  Relative to pre-pandemic employment levels, Jonesboro had recovered by September and continues to tally net gains for the year.  The other metro areas in Arkansas remain below levels of February 2020, with net losses ranging from -0.8% in Texarkana to -4.5% in Little Rock. 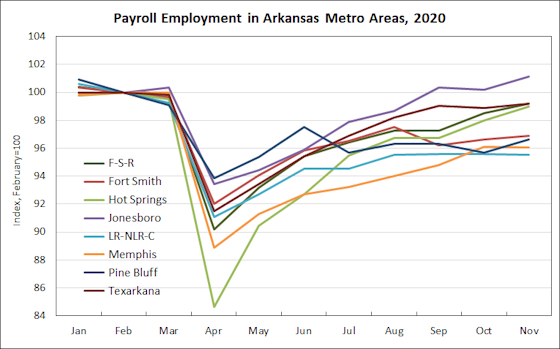 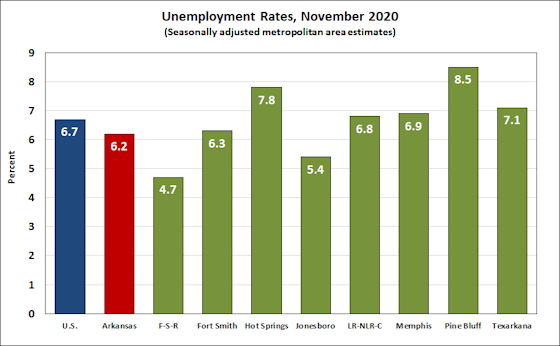