Metro Area Employment and Unemployment – May 2020

The May employment report for metropolitan areas showed slight employment gains in all of Arkansas’ metro areas, offsetting a portion of the sharp declines in April.  The table below showed revisions to the nonfarm payroll employment data for April along with the new numbers for May.  The preliminary numbers for April had originally shown that all of the metro areas contracted as much or more than the statewide average, suggesting that non-metro areas in the state fared better than average.  After revisions, there is more variation among the metros.  Employment totals for Fort Smith, Jonesboro, Pine Bluff and Texarkana were revised to show smaller losses April, while the magnitude of the statewide decline was revised from -8.0% to -8.6%.  The preliminary numbers for May show rebounds in all metro areas, with the size of the rebound generally related to the size of the April decline.  Hot Springs bounced back from a 14.9% loss to register a gain of 6.3% in May.  Jonesboro’s revised April job losses were 6.9%, with a May rebound of only 0.9%.  Since February, cumulative changes in nonfarm payroll employment range from -3.7% in Pine bluff to -10.1% in Hot Springs. 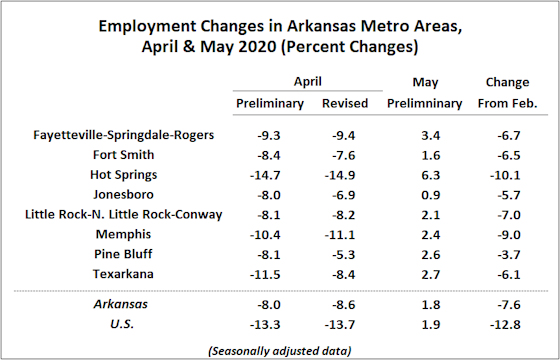 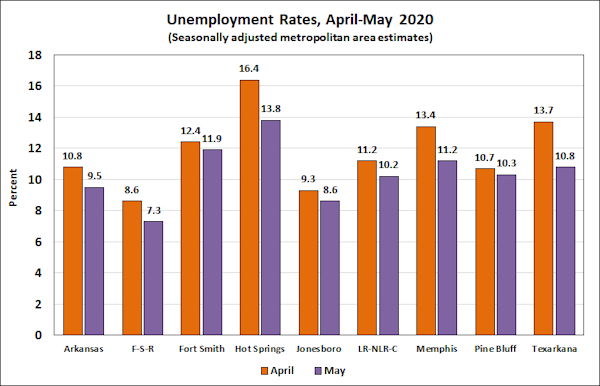