The June employment report for metropolitan areas showed a continuing rebound from the job losses of March and April.  The table below showed revisions to the nonfarm payroll employment data for May, along with the new numbers for June.  The May revisions showed larger employment gains than originally reported in Fort Smith, Hot Springs, and Memphis.  Other metro areas saw downward revisions.  The employment gains continued into June, with increases ranging from 0.7% in Jonesboro to 3.1% in Hot Springs.  Since the Pre-COVID-19 peak in February, employment is down in all of Arkansas’ metro areas, with the magnitude of the declines ranging from -7.2% in Memphis to -2.8% in Pine Bluff. 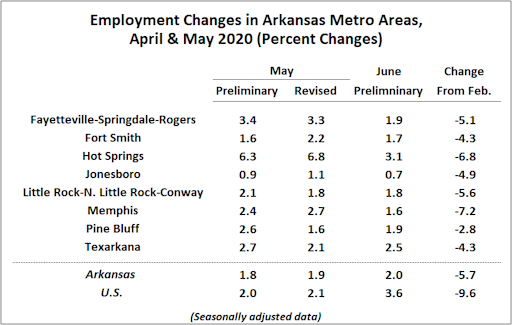 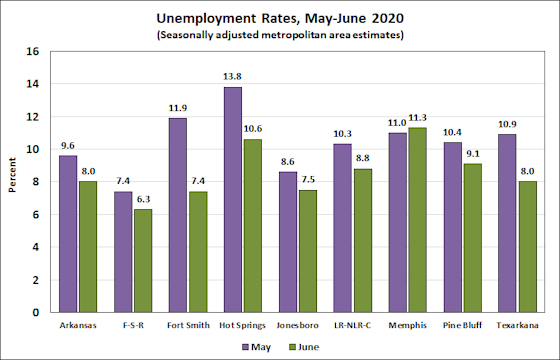 The map below displays a snapshot of unemployment rates by county for June, along with the change from May (not seasonally adjusted data).  Unemployment rates were higher in eight counties and unchanged in one.  Rates were down in the remaining 66 counties, with 26 counties experiencing declines of more than 1.0% and eight counties seeing declines of more than 2.0%.  The highest unemployment rates continue to be generally located in the Delta region, with Chicot County setting the statewide high of 13.6%.  Even after an increase of 0.5 percentage points, Arkansas County continues to have one of the lowest unemployment rates in the state at 5.7%.  However, after a decline of 0.5 percentage points in June, the lowest rate in the state is now in Madison County (5.2%).