July data on employment and unemployment in metropolitan areas showed that unemployment rates were lower than a year earlier in all Metro areas covering parts of Arkansas.  Year-over-year changes in not-seasonally adjusted data range from -0.3 percentage points in Northwest Arkansas to -0.9 in Memphis and Pine Bluff. 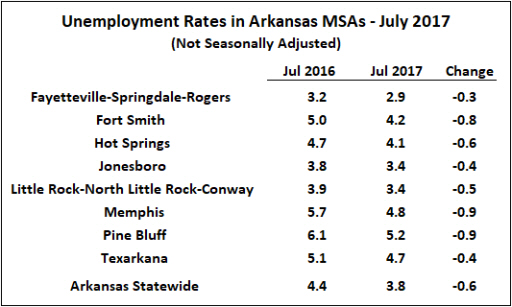 Unemployment rates were unchanged or down slightly from June to July for most metro areas, although the Memphis metro area (which includes one county in Arkansas) saw an increase of 0.2 percentage points in July.  Rates were down in Fort Smith, Pine Bluff, and Texarkana. 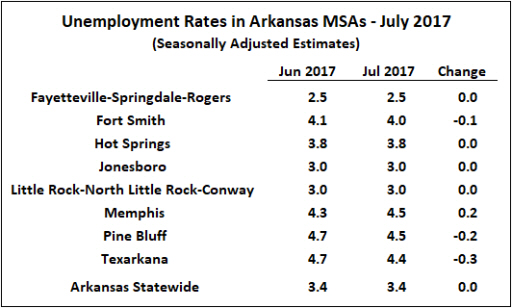 Payroll Employment
Nonfarm payroll employment show wider variations among metro areas than do the data from the household survey. From June to July, payroll employment was unchanged in Little Rock, Memphis and Pine Bluff.  Employment was up Fayetteville, Hot Springs and Jonesboro, while Texarkana saw a decline.  From July 2016 to July 2017, Fayetteville, Hot Springs, Jonesboro and Memphis have experienced net growth, while the year-over-year changes were negative for Fort Smith, Pine Bluff and Texarkana.  Payroll employment in the Little Rock Metro area was unchanged from a year earlier. 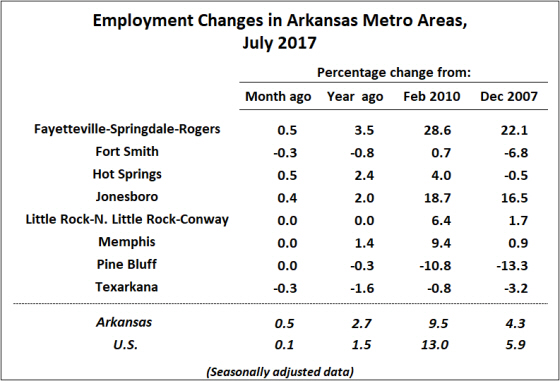