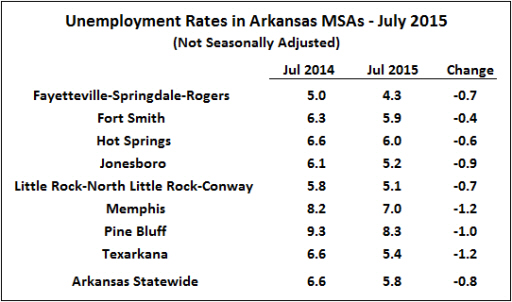 Seasonally adjusted data indicate month-to-month declines in unemployment in 5 metro areas, with rates unchanged in Hot Springs and Texarkana.  The unemployment rate in Memphis ticked up by one-tenth of a percentage point. 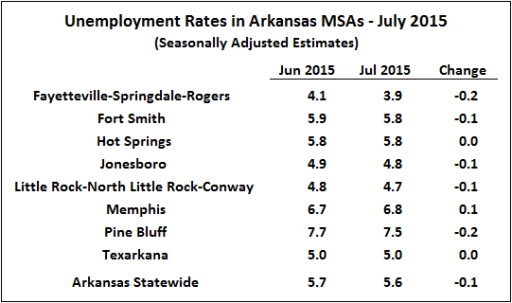 As shown in the figure below, unemployment rates rose slightly in the early months of the year, peaking in April or May.  With the exception of Memphis, rates have resumed their decline over the past two to three months.  The seasonally-adjusted unemployment rate for Fayetteville fell below 4.0% for the first time since April 2008.  At the other extreme, unemployment in Pine Bluff has yet to fall below 7.5%. 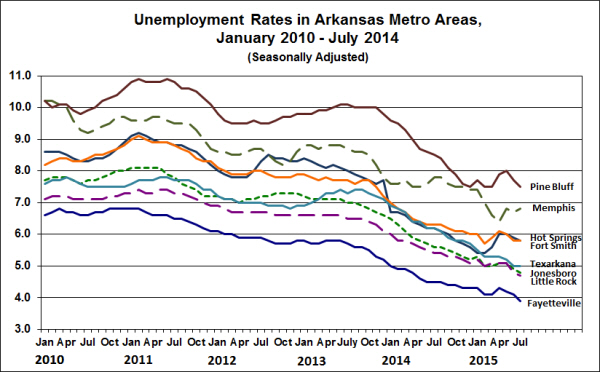 Payroll Employment
Data on nonfarm payroll employment (seasonally adjusted) show mixed changes on a month-to-month basis.  Metro areas showing employment losses in July included Fayetteville, Fort Smith, Hot Springs, Memphis, and Pine Bluff.  Increases were recorded for Jonesboro, Little Rock, and Texarkana.  Compared to a year ago, employment is up for six of eight metro areas covering parts of Arkansas, with only Fort Smith and Pine Bluff registering year-over-year declines.  The news release from the Bureau of Labor Statistics noted that Pine Bluff had the largest year-over-year percentage decline in the nation.  A rather sharp monthly drop in Hot Springs dropped the employment total for that metro area back below pre-recession levels, after having briefly moved into positive territory in June. 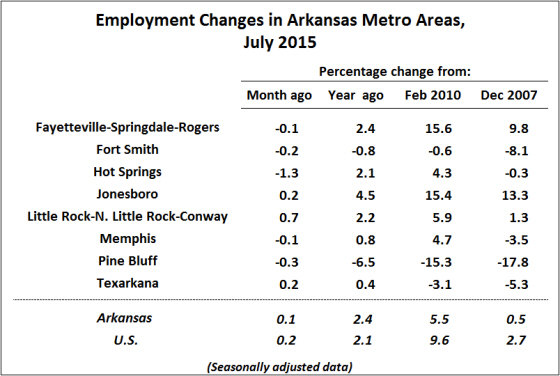