The Bureau of Labor Statistics (BLS) reported this morning that unemployment rates were lower in July than a year earlier in 305 of the nation’s 372 metropolitan areas.  All of Arkansas’ metro areas were included in that total.  Statewide unemployment was down 0.7% from July 2011 (not seasonally adjusted).  As shown in the table below, metro area unemployment rates have fallen between 0.3% and 1.1% over the past year. 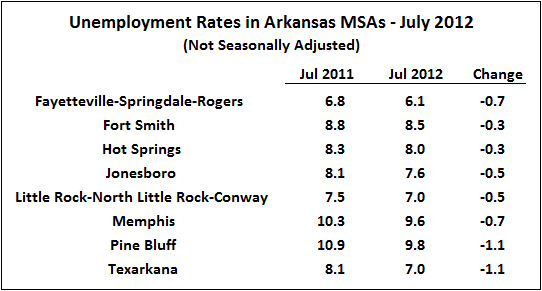 The not-seasonally-adjusted figures showed some sharp increases from the previous month, but these changes were driven by the typical summer upturn associated with students and teachers being off for the summer.  The BLS’s smoothed seasonally adjusted estimates (below) show more modest increases.  Unemployment rates were unchanged in Fayetteville, Little Rock, and Texarkana.  They were up by 0.1% in Hot Springs, Jonesboro, and Pine Bluff.  Fort Smith and Memphis both saw somewhat larger increases (+0.3%). 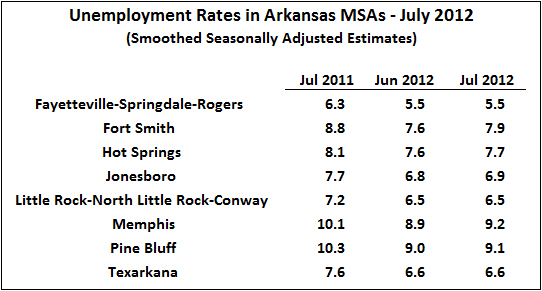 Changes in payroll employment in the state’s metro areas covered a rather wide range.  Compared to the previous month, employment was down in Jonesboro (-0.6%), Fort Smith (-0.6%), Pine Bluff (-0.8%) and Fayetteville (-1.0%).   Employment increased in the state’s other metro areas, with changes ranging from +0.1% in Memphis to +1.0% in Texarkana.  Over the past 12 months, employment in Texarkana has increased by over 7%.  According to this morning’s report from the BLS,  this was the third-largest year-over-year percentage increase in the country. 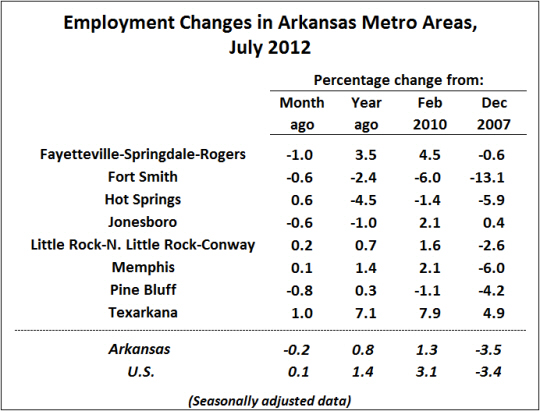 Employment hit a low point in February 2010 (for both Arkansas and the U.S.).  However, employment in three of the state’s metro areas has shown cumulative net declines since then.  Compared to the month before the recession started (December 2007), employment is still down in most metro areas.  Employment in Jonesboro is slightly above its pre-recession level (+0.4%) and it is considerably higher in Texarkana (4.9%).