Payroll Employment
Data on nonfarm payroll employment have been fully revised as of Monday’s release of the annual benchmark revisions.  The latest data, for January, showed monthly employment increases in Fort Smith, Jonesboro and Texarkana.  Little Rock and Pine Bluff saw monthly declines, while employment in Fayetteville, Hot Springs and Memphis was unchanged.  Over the most recent 12 months, employment has increased in Fayetteville, Jonesboro, Little Rock and Memphis.  Year-over-year declines were recorded for Fort Smith, Pine Bluff and Texarkana. 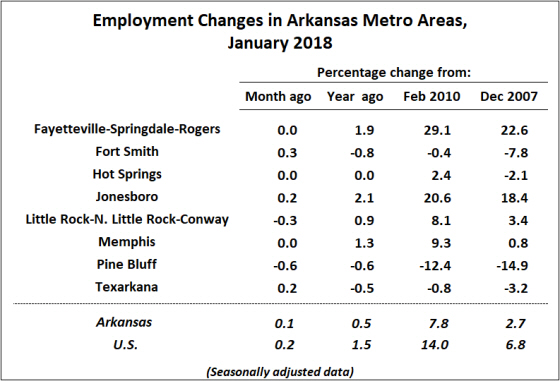 Payroll Employment Revisions
As reported earlier this week, the nonfarm payroll employment figures for Arkansas statewide were revised downward for 2016 and 2017, with a net downward revision as of December 2017 of 9,600 jobs.  As shown in the table below, the data for most of Arkansas metro areas were revised upward, not downward.  Excluding Memphis (which includes only one county in Arkansas), the aggregate revision to the December 2017 metro area employment levels was an increase of 3,900 jobs.  The obvious conclusion is that the statewide negative revisions to the employment data were concentrated in the non-metropolitan counties of the state. 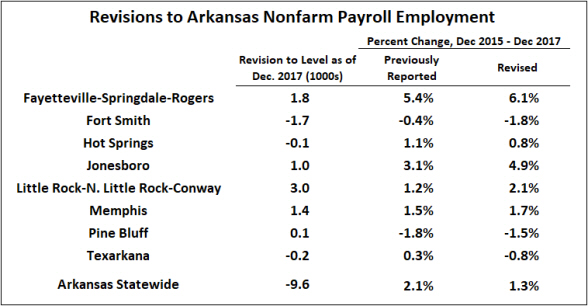 Moreover, the growth rates of metro area employment were revised upward in many cases over the revision period (April 2016 – December 2017).  The two-year growth rates in the table show upward revisions for the relatively rapidly growing metro areas of Fayetteville, Jonesboro and Little Rock.  Employment growth in Memphis was also revised higher.  The revision for Pine Bluff showed a slightly slower rate of contraction than indicated by previously reported data.  The previously-published and revised paths of metro are employment are illustrated in a series of charts below. 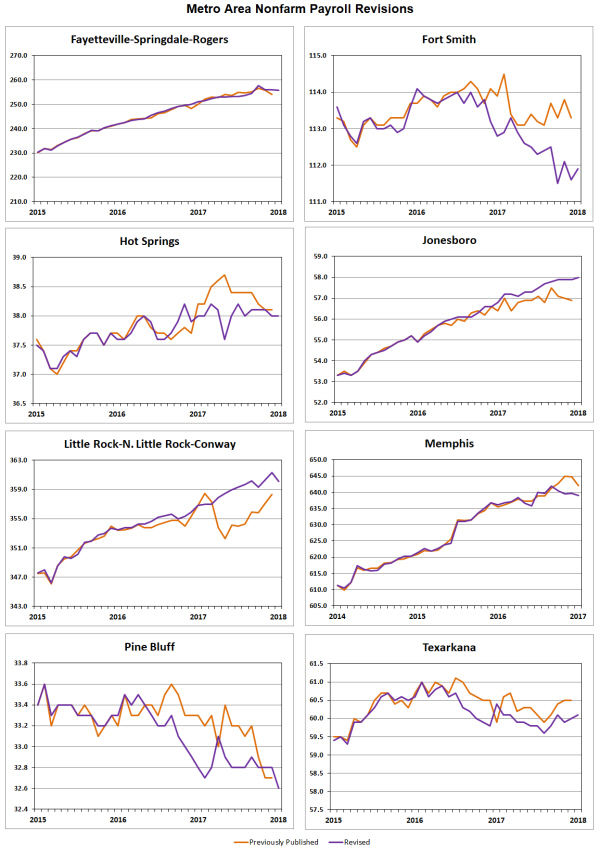