New data on metro area employment and unemployment came out this morning.  The BLS news release noted that  “Unemployment rates were lower in January than a year earlier in 345 of the 372
metropolitan areas.”  All of Arkansas’ MSAs were included in this total.  The changes ranged from down 0.3 percentage points in Fort Smith and Jonesboro to down 0.9 in the Memphis MSA.  The not seasonally adjusted data showed increases from December unemployment rates, but these largely represented seasonal effects associated with the end of the holiday shopping season.  Smoothed seasonally adjusted unemployment rates will be available later in the day. 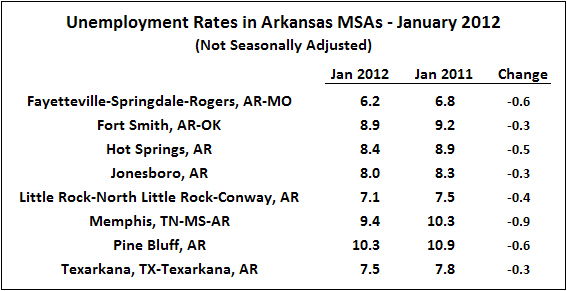 The seasonally-adjusted nonfarm payroll employment data (which reflect the recent benchmark revisions) show monthly employment increases in six of Arkansas MSAs.  Fort Smith and Memphis both saw monthly declines.  Compared to the previous year, employment was up in all metro areas except Fort Smith.  In fact, the  BLS news release reported that Fort Smith had both the highest number of job losses and highest percentage decrease of all the nation’s MSAs. 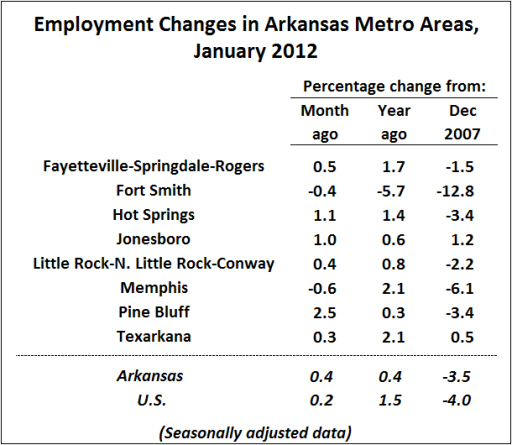 Since the beginning of the recession in December 2007, net employment changes are positive only in Jonesboro and Texarkana.  Net employment losses in the other metro areas of the state range from 1.5% in Fayetteville to 12.8% in Fort Smith.