Data on unemployment rates for metropolitan areas are still in flux after recent revisions.  Today’s news release featured new information for February and revised figures for January, but the databases at the Bureau of Labor Statistics have not yet been updated with revised historical data.  We do know that the not-seasonally adjusted data shows unemployment rates lower than a year ago in six of Arkansas’ eight metro areas.  In Memphis and Texarkana unemployment rates are up slightly from February 2016 to February 2017. 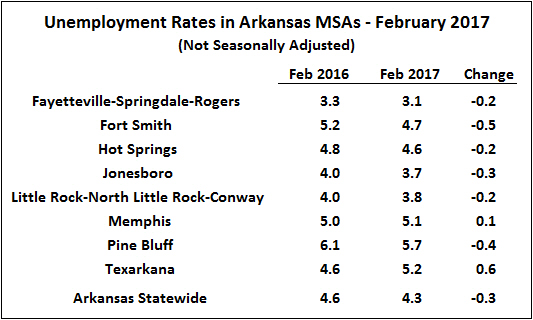 Although the statewide unemployment rate ticked downward in February (to a new record low), seasonally adjusted estimates for Arkansas metro areas indicate slight increases in unemployment from January to February.  The unemployment rate in Memphis dropped by 0.4 percentage point and unemployment in Jonesboro was unchanged, but the other metro areas saw increases.  The seemingly anomalous juxtaposition might just be noise in the data or reflect idiosyncrasies of the seasonal adjustment process — stay tuned for future revisions. 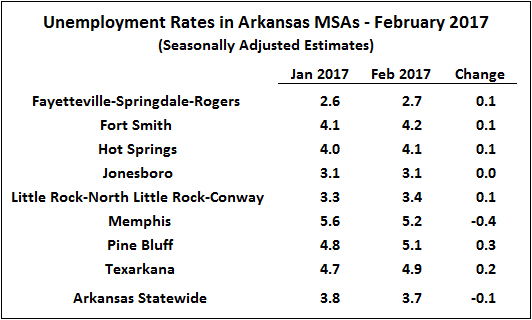 Payroll Employment
Nonfarm payroll employment was unchanged or higher in all of Arkansas’ metro areas.  The two metro areas that have been growing the fastest during the current economic expansion saw significant gains:  Jonesboro was up 0.9% from January to February and Fayetteville rose 0.8%.  Texarkana, where job growth has been rather weak in recent years, saw a full percentage point increase in employment. 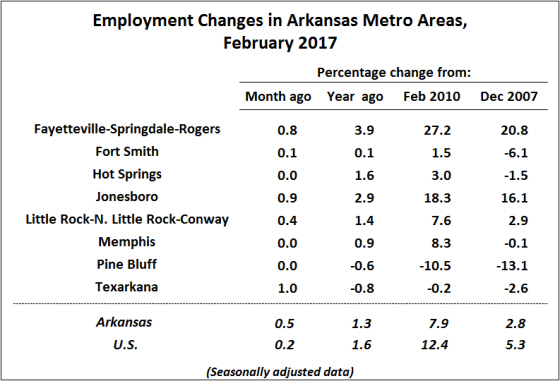 Only three metro areas — Fayetteville, Jonesboro, and Little Rock — have seen net increases in payroll employment since the pre-recession peak of December 2007.