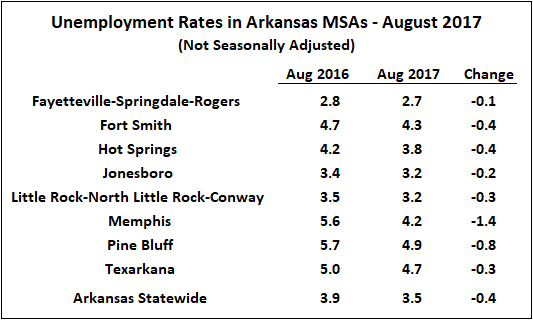 As previously reported, Arkansas’ statewide unemployment rate ticked up one-tenth of a percentage point in August, with the increase attributable to the first notable increase in the number of unemployed Arkansans since 2011.  Unemployment rates in the state’s metro areas generally followed the same pattern.  An increase in the number of unemployed was reported each of Arkansas’ metro areas except Memphis.  The increases were large enough to push unemployment rates up in Fayetteville, Fort Smith, Jonesboro, Little Rock and Pine Bluff. 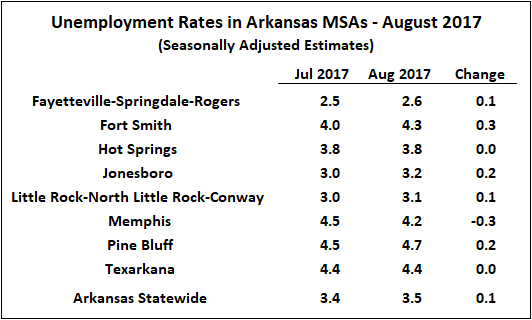 Payroll Employment
Nonfarm payroll employment in Arkansas metro areas also followed the statewide pattern of a downturn in August, with payrolls declining in four of the state’s metro areas.  Declines were particularly pronounced in the rapidly growing northwest and northeast corners of the state, where recent employment growth trends have been the highest.  Payroll employment in Fayetteville was down 0.4% from July to August, but remained up 3.0% from a year earlier.  In Jonesboro, the monthly decline registered 0.5%, leaving employment 1.6% above its August 2016 level. 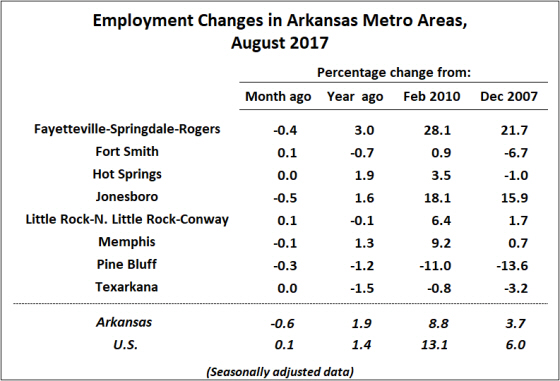