Unemployment rates in Arkansas metro area continued their downward trend in April.  The Bureau of Labor Statistics reported yesterday that unemployment rates were lower than a year earlier in 322 of the nation’s 388 metropolitan areas.  Seven of Arkansas’ eight metro areas were included in this number.  In Texarkana, where the rate has been drifting upward  over the past twelve months, the unemployment rate was up 0.5% compared to last April. 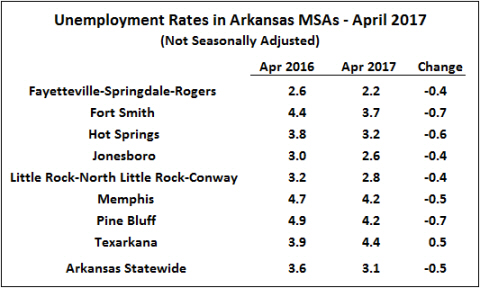 On a seasonally adjusted basis, unemployment rates ticked downward in all Arkansas metro areas except Fort Smith, where it was unchanged. 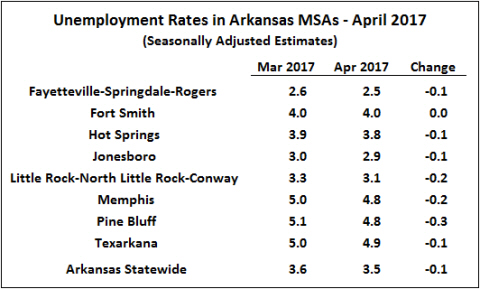 The time series of seasonally adjusted unemployment rates shows convergence to three different levels cross the state.  Texarkana, Memphis and Pine Bluff are clustered around 5%, Fort Smith and Hot Springs are at or near 4.0%, and Little Rock, Jonesboro and Fayetteville are at 3% or lower. 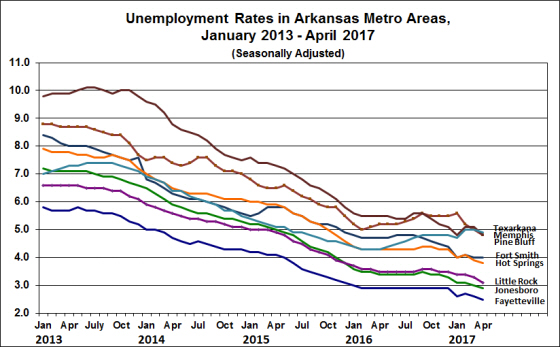 Payroll Employment
Changes in nonfarm payroll employment were mixed around the state.  Only Jonesboro and Hot Springs showed increases from March to April, while Fayetteville, Fort Smith, Little Rock, Pine Bluff and Texarkana experienced employment declines.  Memphis was unchanged.  Compared to a year earlier, employment has declined in Fort Smith, Pine Bluff and Texarkana.  Fayetteville Jonesboro, Hot Springs and Memphis are up significantly, while Little Rock employment is essentially unchanged. 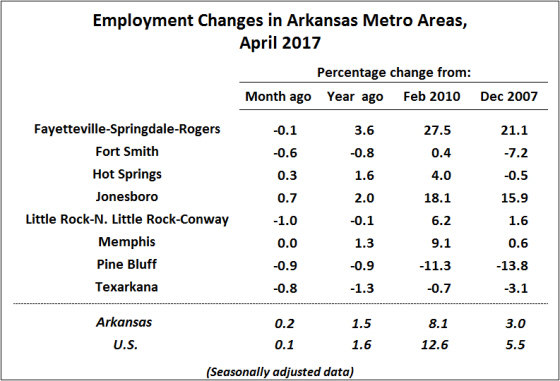 Compared to employment levels before the 2008-09 recession, employment statewide has expanded by 3.0%.  But that aggregate masks some huge differences among metro areas and regions.  Employment levels in Fayetteville and Jonesboro are up 21.1% and 15.9%, respectively, while payrolls in Pine Bluff are down 13.8%.