Last week’s employment report for Arkansas showed a surprising decline in statewide payroll employment.  After two months of growth totalling 6,700 jobs (+0.6%), nonfarm payrolls declined by 1,900 (-0.2%) in March (seasonally adjusted).  Data for the state’s metropolitan areas shows that only Fayetteville and Jonesboro showed positive growth for the month.  Employment was unchanged in Hot Springs and Pine Bluff.  Declines were registered in Memphis, Little Rock, Texarkana and Fort Smith.  Compared to the previous year, employment is up in most of Arkansas’ MSAs — the exceptions being Little Rock (-0.3%) and Fort Smith (-6.3%).  Compared to the start of the recession in December 2007, both Jonesboro and Texarkana are now in positive territory, with Fayetteville close to the break-even point. 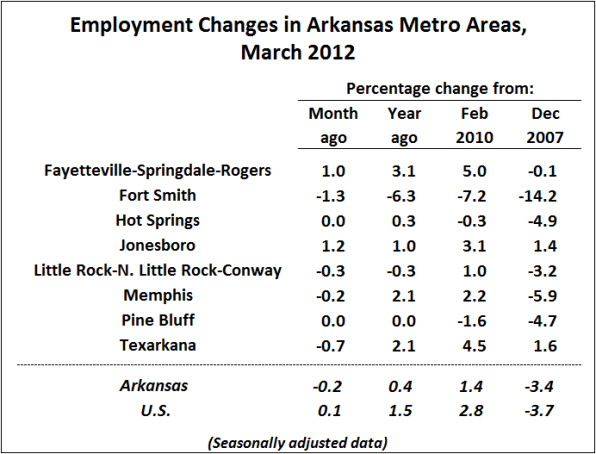 As shown in the chart below, employment patterns among Arkansas metro areas have shown some dinstinct individual patterns.  All of the state’s MSAs showed sharp declines during the depth of the recession in late-2008 through 2009.  Signs of recovery were generally evident in early 2010, but employment growth rates have diverged considerably since then.  Many parts of the state showed weak or negative employment growth during 2011.  Jonesboro and Texarkana continued to experience positive growth — albeit at slower rates.  Hot Springs saw a surge in job growth during 2011, but the increase appears to have been temporary.  Other areas of the state continue to recover slowly.  The clear exception to the pattern of slow, uneven recovery is Fort Smith:  After suffering an 8% decline in employment in 2008 and 2009, recovery in early 2010 was only partial and temporary.  More recent job losses in the Fort Smith MSA have continued to mount. 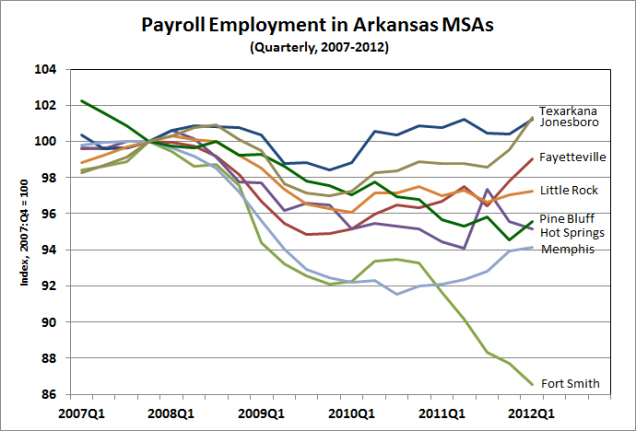