Leisure and Hospitality Industries in Arkansas – 2020

This article documents the performance of Leisure and Hospitality industries in Arkansas relative to the United States as a whole.  Using payroll employment data and statistics derived from tax-collection data, we show that Arkansas has experienced smaller downturns in the Leisure and Hospitality sector than the national average, but the data also suggest persistent declines at both the state and national levels.

Figure 1 shows the composition and relative sizes of industries within the Leisure and Hospitality sector, in terms of employment shares in 2019. The total sector represents a smaller employment share in Arkansas than in the national totals, 9.4% versus 11.0%.  Restaurants and bars account for the overwhelming share of employment within the Leisure and Hospitality sector, particularly in Arkansas. 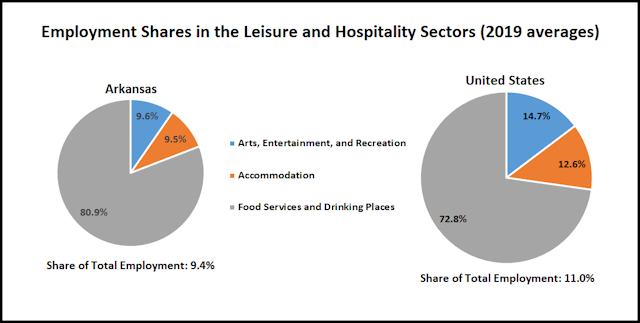 Food Services and Drinking Places
The largest subset of industries in the Leisure and Hospitality Sector comprises bars and restaurants.  As shown in Figure 2, employment dropped dramatically in April 2020, falling more than 48% from the previous year nationwide.  In Arkansas the decline was somewhat smaller—only 38.5%.  After recovering during the summer months, employment levels were still down nearly 20% nationwide and about 10% in Arkansas at the end of the year. 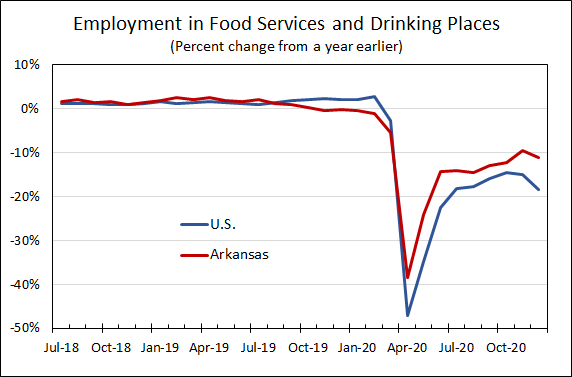 Figure 3 shows sales figures for the Food Services & Drinking Places sector.  Data for the U.S. are drawn from the U.S. Retail Trade and Food Services survey, published by the U.S. Census Bureau.  Sales figures for Arkansas are derived from county-level sales tax revenue, available by four-digit industry sector from the Arkansas Department of Finance and Administration.  Tax distributions for Food Services and Drinking Places are extracted from the overall figures, adjusted for changes in tax rates, then aggregated across counties.

The percentage changes in sales shown in Figure 3 display a pattern similar to the employment changes in Figure 2.  Nationwide restaurant and bar sales plunged over 50%, while in Arkansas the drop was 24%. By October, nationwide sales remained 12.5% below year-ago levels, while Arkansas sales had recovered to near pre-pandemic levels.  However, data available for November and December suggest renewed weakness. 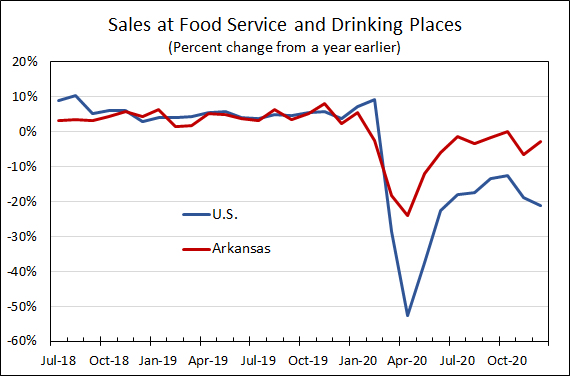 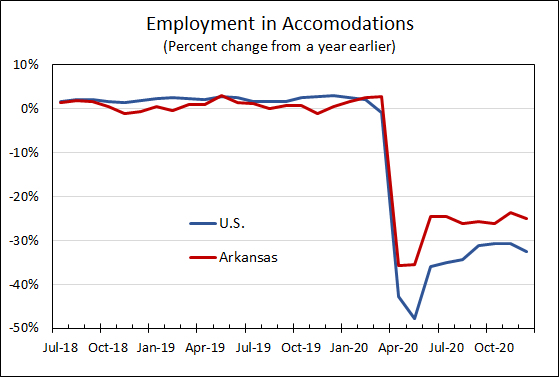 There are two measures of state-level sales available to consider:  in addition to the county sales tax statistics, the state collects a 2% Tourism Tax that applies directly to the service of providing “accommodation to a transient guest.” Figure 4 shows year-over-year growth rates of these two proxies for sales in the Accommodations industry.  They show very similar patterns, especially the COVID-related downturn in April which amounted to a loss of approximately two-thirds of total revenues in the Accommodations sector. 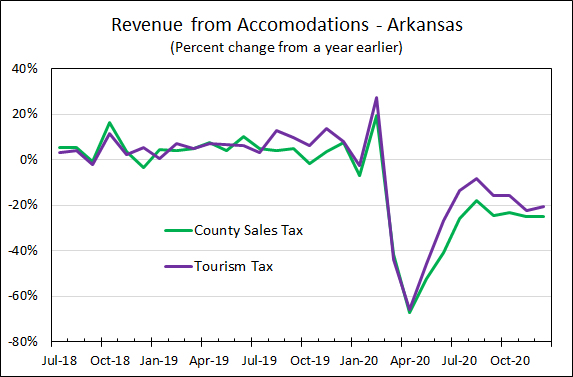 The two revenue measures diverge during the summer months, with county sales tax receipts showing sustained declines from the previous year (down 23%) while the tourism tax indicated a slightly better recovery from the spring downturn.  One possible explanation of this patterns is that the tourism tax applies solely to accommodations, while the sales tax applies to other services provided by hotels and motels, including catering, providing meeting space, etc.  The sustained decline in the sales tax measure suggests that revenue losses in the Accommodation industry run deeper than just a dearth of travelers.

To give an indication of how sales in the Accommodation industry in Arkansas compare to national trends, Figure 6 compares the Arkansas tourism tax to a national measure of revenue per available room.  Under the assumption that the number of available rooms an Arkansas has changed little over time, the national revenue per room should correspond to the Arkansas revenue measure derived from the tourism tax.  Figure 6 shows that the decline in revenues nationwide was even sharper than the downturn in Arkansas.  Revenue per room in April was down 80% from the previous year, and continues to trend 50% lower than pre-pandemic levels. 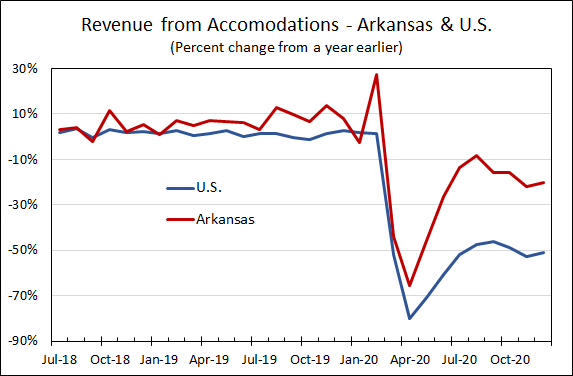 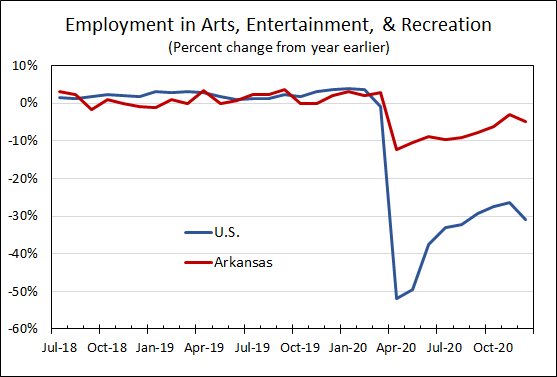 Sales tax data for industries in Arts, Entertainment and Recreation are somewhat sparse.  In any specific county, data are suppressed in sectors with fewer than three firms, so the totals are likely incomplete.  Moreover, comparable sales data on the national level are available only on a quarterly basis (from the U.S. Census Bureau’s Quarterly Services Survey).  Figure 8 displays year-over-year growth rates Arkansas and the U.S.  The Arkansas figures are constructed by aggregating total county-level sales tax data for the entire set of industries, then averaging over calendar quarters.  The series for the U.S. is the growth rate of Total Revenue for Arts, Entertainment, and Recreation from the Census Bureau. 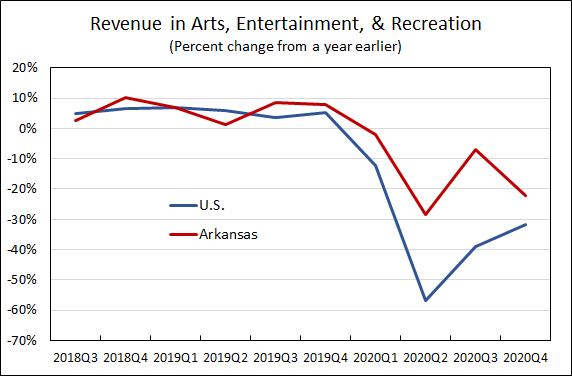 The revenue data for the U.S. show a pattern similar to the employment data.  A sharp drop in the second quarter of 2020 represented a 57% decline from the previous year, and revenues remained down more than 30% by the end of the year.  In Arkansas, the second-quarter decline was only 28.4%. Arkansas revenues from Arts, Entertainment, and Recreation recovered sharply in the third quarter, but data for the fourth quarter suggests renewed weakness.

As comparisons in other industries have shown, economic activity in Arkansas was not as severely impacted by the COVID-19 pandemic as in other parts of the nation.  This appears to be true for Leisure and Hospitality sectors as well.  Although employment, sales and revenue have partly recovered from sharp declines in the spring of 2020, economic activity in the Leisure and Hospitality industries remained well below year-earlier levels at the end of 2020.

A PDF file of this report is available HERE.