In addition to the monthly report on state-level employment and unemployment, the Bureau of Labor Statistics issued this morning its first-ever report on state-level estimates for Job Openings and Labor Turnover Survey (JOLTS).  The national JOLTS data have been an invaluable tool for labor economists in recent years, facilitating the examination of labor market flows in more detail than the traditional unemployment statistics.  The JOLTS data include estimates of Job Openings, Job Separations (divided into Quits, Layoffs & Discharges, and Other Separations) and Hires.

In recent months, two aspects of the national JOLTS data have been a focus of interest with regard to the ongoing “labor shortage.”   First, over the course of 2021 the ratio of unemployed persons to job openings was steadily declining, falling below 1.0 in July.  As shown in the figure below, that ratio has followed a similar path for Arkansas.  The number of unemployed per job opening had a much lower peak in Arkansas during the height of the pandemic (2.7 vs. 5.0 nationally), and the decline in Arkansas has paralleled the U.S. data.  The ratio fell below 1.0 for the U.S. in May, while the ratio in Arkansas has been below 1.0 since January.  As of August (the most recent data available), the unemployed/job-openings ratio was 0.8 in the U.S. data and 0.6 for Arkansas.* 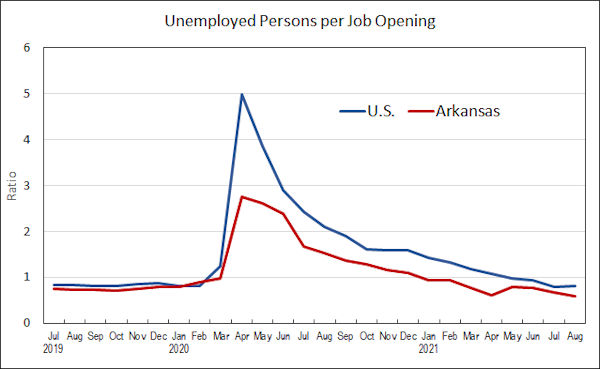 The second statistic from JOLTS that has received recent attention is the quits-rate: the number of job quitters as a percent of total employment.  In August, this ratio hit an all-time high of 2.9% for the U.S., suggesting that labor market conditions were so favorable that a record proportion of workers felt confident enough to quit their jobs in favor of better prospects.  As shown in the second figure, below, quit rates in Arkansas have generally run higher than the national average, but are also at or near a record-high for the state (particularly when some of the month-to-month volatility is smoothed using a moving average). 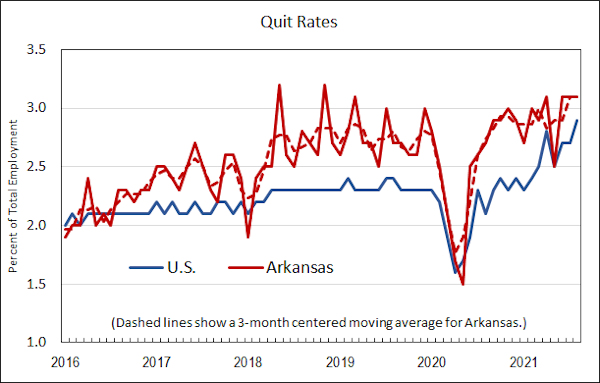 Going forward, the new database on state-level JOLTS statistics undoubtedly will be a useful source of information about Arkansas labor market dynamics. There are many more insights (and shortcomings) associated with the data that we will be following in coming months here at the Arkansas Economist.

*Correction:  The first-published version of this article included miscalculated values for the ratio of Unemployed to Job Openings for Arkansas.  The figures have been corrected and the commentary changed accordingly.  [The JOLTS data set does not include this ratio in their official reports for individual states, but it can be calculated using unemployment statistics from the Local Area Unemployment Statistics (LAUS).  This is the calculation that was initially reported incorrectly.]