Forecast Update: Impact of Covid-19 on the Arkansas Economic Outlook (May)

The economic impact of the COVID-19 pandemic continues to be more rapid and more severe than initially expected.  In our previous forecast dated April 8, we projected a payroll employment decline of 108,000 by the end of the year.  It now appears that job losses during the month of April alone will exceed this magnitude.  The unemployment rate – previously projected to reach 9.3% in the fourth quarter – will likely be well over 10% for April.

In this updated report we present new projections for the Arkansas economy.  The forecast is based on the latest update to the national outlook from IHS Markit, dated May 11, 2020.  The new IHS forecast projects GDP growth falling at nearly a 37% annual rate in the second quarter – down from the 26.5% rate of decline forecast a month ago.  National unemployment is now projected to peak at nearly 20%, with the peak now coming sooner (in the third quarter rather than the fourth).  The latest IHS forecast takes into account new data and new assessments of employment, income and spending patterns – including the national employment data for April that came out last Friday, May 8.  (April employment data for Arkansas will not be released until May 22.)

Assessing the prospects for the timing of a national economic recovery, Joel Prakken, Chief US Economist emphasized the uncertainties that remain: “A phased re-opening of the economy has begun already. On the one hand, this is likely to make April or May the low point in consumer spending and GDP. On the other hand, studies suggest it likely will slow the decline in new cases and deaths, discouraging many consumers from resuming their pre-COVID-19 spending patterns and thereby slowing the recovery in spending.”

As with our previous forecasts for the Arkansas economy, we have applied the recent IHS national forecast adjustments to the model for Arkansas, adjusting the components of each aggregate separately in order to capture some of the unique characteristics of the Arkansas economy. Our forecast is also informed by a recent update to the IHS Arkansas model that reflected the assumptions in the previous (April 8) national model.

Employment
The most significant revision to the forecast is a more rapid and sudden decline in payroll employment.  Employment declines in March were unexpected in their abruptness, and the data available for April indicate a truly precipitous decline.  The national data showed an employment loss of over 20 million for the month.  If the major sectors of the Arkansas economy show job-losses with magnitudes similar to the U.S., we should expect to see that Arkansas nonfarm payroll employment declined by about 160,000 April.

The latest forecast indicates total job losses of 240,000 by the third quarter of 2020, a drop of 19% drop from the first quarter.  A gradual recovery begins in the fourth quarter but by the end of 2021, employment remains more than 80,000 below pre-COVID-19 levels. 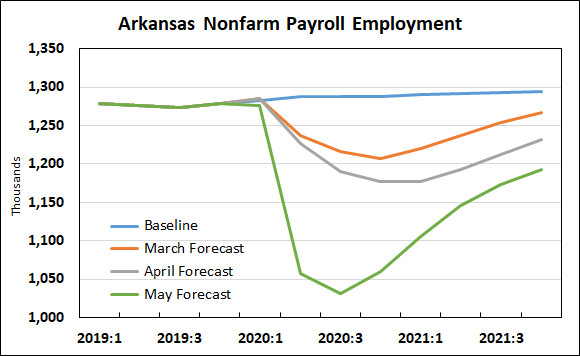 As shown in Table 1, forecasts for job losses continue to be somewhat concentrated in service-providing sectors that are considered especially impacted by social-distancing norms.  However, the new forecast shows sharply larger employment declines across the entire economy. 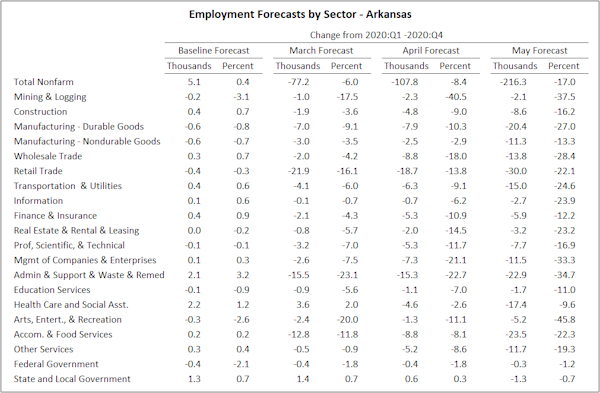 Unemployment
The Arkansas unemployment rate was previously forecast to peak at 9.2% in the fourth quarter.  It now appears to be well over 10% already.  Using the methodology described in a recent post, data on unemployment insurance claims and projections of nonfarm payroll employment suggest that the reported unemployment for April rate will be in the neighborhood of 12.5%.

Our latest forecast suggests an unemployment rate peaking at 17% in the third quarter. As dire as that sounds, the forecast for Arkansas is lower than the national rate of 19.6%.  Recent data suggests that the labor force participation rate might fall by as much as 5%. This unprecedented drop would have the effect of reducing the reported unemployment rate, but would nonetheless represent a labor-force contraction.

Personal Income The latest forecast for personal income includes even larger increases in transfer payments than in our April forecast, reflecting expansions of federal spending associated with the CARES Act and higher estimates of unemployment insurance payments.  Nevertheless, income losses that are directly related to higher unemployment result in a downward revision to total personal income, at least during the current quarter. 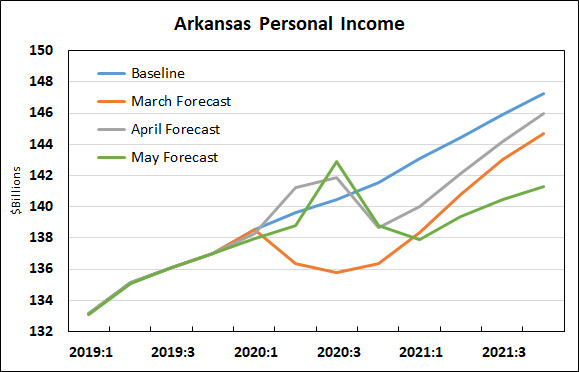 Figures 3a and 3b help to disentangle the personal income forecasts.  Driven by declining employment, the outlook for personal income less transfer payments has grown more pessimistic with each iteration of the forecast.  Economic stimulus payment, on the other hand, have the effect of increasing personal income, particularly in the second and third quarters of the year. The net result is the forecast shown above in Figure 3: total income below trend except for the third quarter of the year, when transfer payments are expected to peak.  Assuming no additional government stimulus programs, the net outcome is that total personal income declines to a reach a trough in the first quarter of 2021. 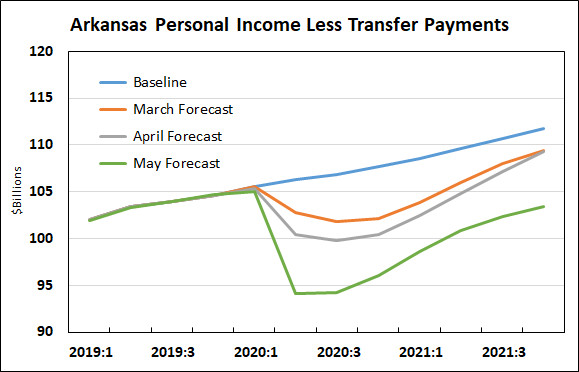 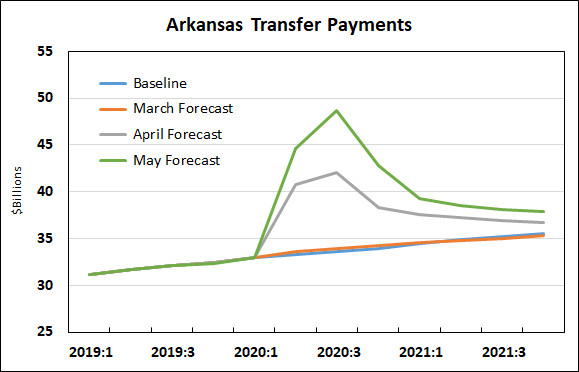 Consumer Spending Despite the boost to incomes from expected transfer payments, the balance of forces is again expected to result in sharper declines in Personal Consumption Expenditures (PCE) than in the previous forecast.  Spending in the second quarter is now projected to decline by 13.4%, compared to a decline of 9% in the April forecast. 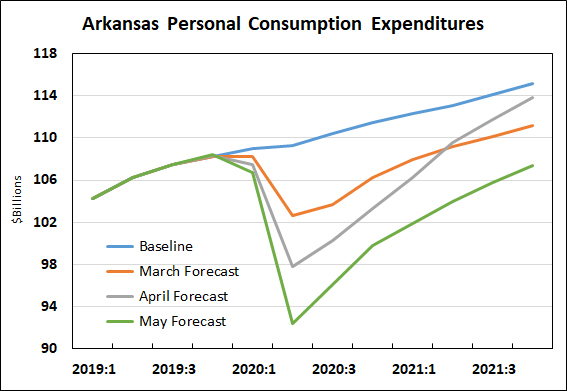 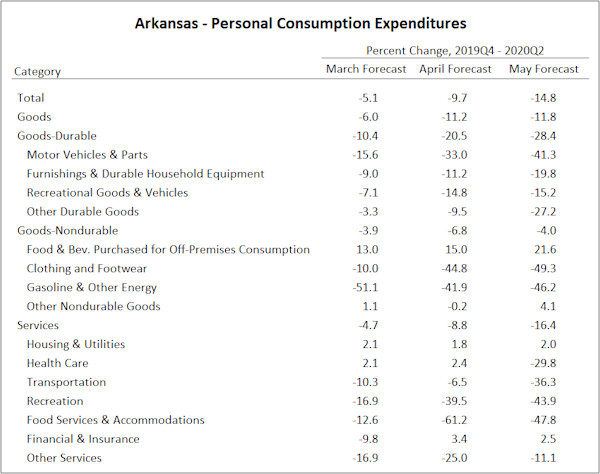 When gasoline expenditures are excluded, nondurable goods purchases are expected increase throughout the forecast horizon.  But subtracting Food and Beverages Purchased for Off-Premises Consumption, the remaining components are expected to decline by about 8%. Driven by reduced spending on Recreation and Food Services & Accommodation, spending on services is expected to decline by over 16%.  The largest declines are in the durable goods components. 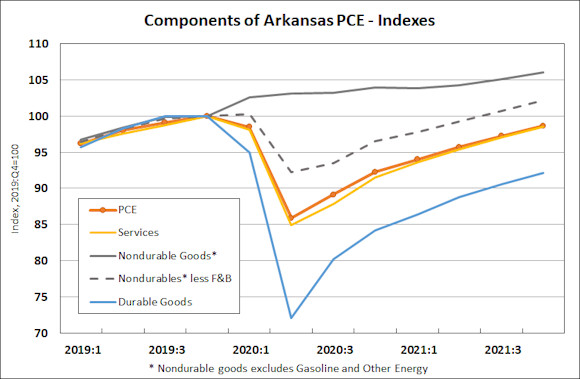 Implications for Local Sales Tax Collections
For assessing the impact on county and municipal sales tax collections, the question is how the tax base is reflected in the various components of spending.  Durable goods are taxable and represent a significant share of the sales tax base.  Nondurable goods, excluding gasoline, are also taxable.  Services are generally not taxable, with the exception of some categories that are expected to be hard-hit by the downturn; in particular, Recreation and Food Services & Accommodation.  On the other hand, the surge in grocery sales represent a component of county and municipal sales tax bases that should help offset declines in other categories.

As a proxy for local sales tax bases in Arkansas, we take a simple sum of Durable Goods plus Nondurable Goods (less Gasoline and other energy) plus two services components, Recreation and Food Services & Accommodation.  This isn’t a perfect measure.  For example, it excludes the utilities component of Housing and Utilities, as well as some taxable components of Other Services.  Moreover, as a measure of consumer spending, it does not include some taxable business-to-business sales.  Nevertheless, this aggregate measures some of the key components of the tax base.

Figure 6 shows the trajectory of this measure compared to total Personal Consumption Expenditures, along with a comparison of the current outlook and the April forecast.  In the new forecast, the decline in total PCE has been revised from roughly -10% to -15%.  The proxy for taxable sales, however, has been revised to show a somewhat smaller decline (-16.7%) than previously forecast (-18.1%).  The key factor driving this revision is the more optimistic assessment of food services consumption, along with upward revisions to some components of nondurable goods purchases.

Although the impact of the initial decline in taxable sales is slightly smaller than in our previous forecast, the path toward recovery is more gradual, reflecting the persistence that higher unemployment and lower income builds into the forecast. 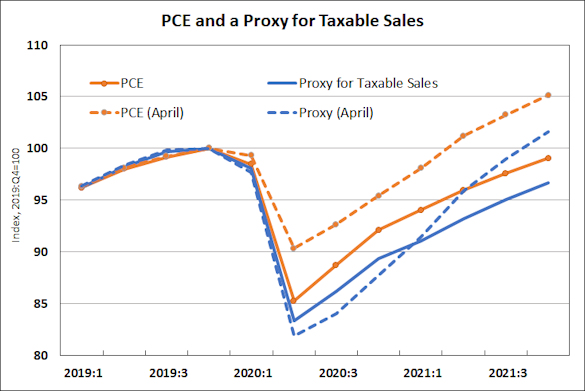 A PDF copy of this report is available HERE.