Since our last forecast update six week ago (June 10), incoming data have continued to show a more rapid recovery from the COVID-19 shutdowns than previously expected.  Nonfarm payroll employment bounced back with increases of 1.9% and 2.0% in May and June, respectively, leaving total employment down only 5.7% from February.  The unemployment rate declined from its April peak of 10.8% to a rate of 8.0% in June.  Meanwhile, the pace of government stimulus payments has further boosted personal incomes, and data on local sales tax collections indicates somewhat smaller declines in consumer spending than earlier projected.

In this updated forecast report, we present new projections for the Arkansas economy in light of recent developments, incorporating newly-published data. The forecast is based on the latest update to the national outlook from IHS Markit, dated July 8.  The July IHS forecast projects second-quarter GDP growth falling at an annual rate of 35.5% – a somewhat smaller drop than expected the previous month.  The national unemployment rate peaked at 13.4% in the second quarter, and is expected to decline gradually over the next several quarters, reaching single-digits by the end of this year and down to 6% by the end of 2021.

As with our previous forecasts for the Arkansas economy, we have applied the recent IHS national forecast changes to the model for Arkansas, adjusting the components of each aggregate separately in order to capture some of the unique characteristics of the Arkansas economy. Our forecast is also informed by updates to the IHS Arkansas model published in June and July.

The following sections present our latest post-COVID-19 forecasts for Arkansas, comparing the latest projections to previous forecasts.  The figures presented here compare the current (July) and previous (June) forecasts, relative to the pre-COVID-19 baseline from February.

Employment
The most significant revision to the forecast is, once again, the outlook for employment. In June we had expected employment declines to moderate, with job losses continuing into the third quarter.  The sharp rebounds that we saw in May and June are now baked into the forecast for the third quarter, implying employment growth of 4.1% relative to the second quarter.  Employment is expected to recover to pre-pandemic levels by mid-2021. 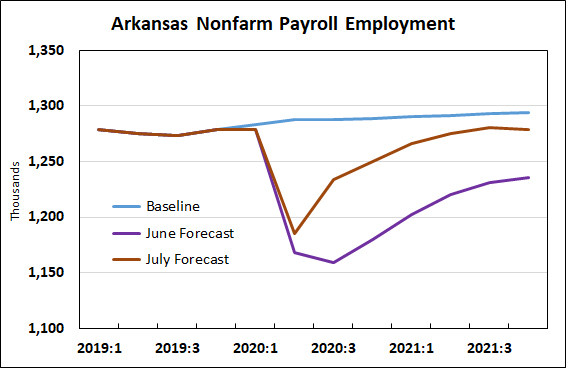 Unemployment
The monthly household survey on which the unemployment rate is based continues to encounter logistical difficulties and is also plagued by problems with categorizing workers who have been temporarily idled by COVID-19 shutdowns.  Since March, the BLS has noted that many workers affected by COVID-19 shutdowns were incorrectly classified as “employed but absent from work” instead of “unemployed on temporary layoff.”  The magnitude of this misclassification appears to be diminishing over time, but there is still greater-than-usual uncertainty about the unemployment statistics.

Measurement problems notwithstanding, Figure 2 shows the latest outlook for Arkansas unemployment.  Just a month ago, the forecast indicated unemployment would average over 10% in both the second and third quarters.  The preliminary data indicate that the unemployment rate peaked at 9.5% in the second quarter and is now expected to decline gradually over time.  The unemployment rate should drop below 6% sometime in 2021, but is unlikely to return to full-employment levels until sometime the following year. 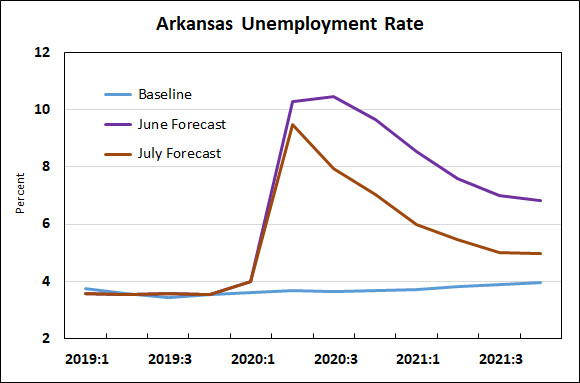 Personal Income
Estimates of income from government stimulus payments continue to raise personal income estimates for the second quarter.  It is now estimated that second-quarter transfer payments (which include special tax rebates, expanded unemployment insurance benefits, and other social safety-net programs) will be 66% higher than in the first quarter.  The higher estimates for transfer payments reflect both the magnitude and speed with which payments are being sent out.  Congress is currently considering legislation to extend some of the programs established by the CARES Act, but the current forecast assumes that programs will expire as scheduled.  Consequently, while it is likely that elevated transfer payments will continue to raise incomes in the second half of 2020, the current forecast maintains the assumption that transfer payments will drop sharply in the third quarter.

For total personal income, the current forecast estimates that Arkansas Personal Income in the second quarter was 14.6% higher than a year earlier.  With transfer payments expected to drop off in the third quarter, income will still be up 4% on a year-over-year basis. 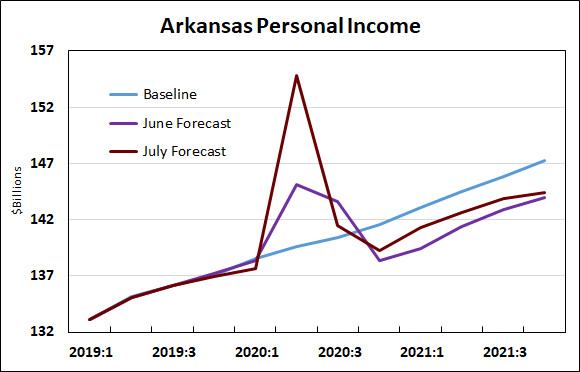 Figures 3a and 3b show how the total income forecast is reflected in expectations for transfer income and non-transfer income.  Net of transfer payments, personal income is now expected to show a decline of 4.3% in the second quarter—and improvement over the 7.8% decline in the June forecast.  The July forecast also reflects newly available data for the first quarter, showing that non-transfer income dropped 0.2% instead of the 0.4% increase that was expected. 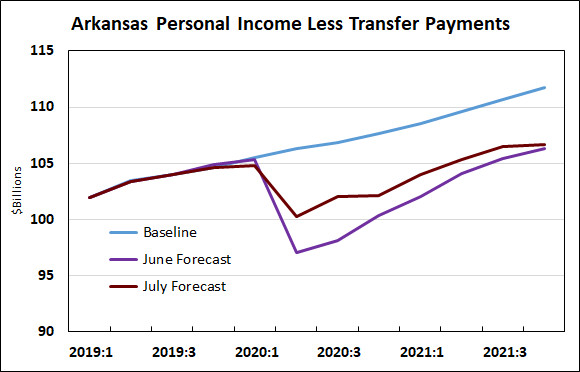 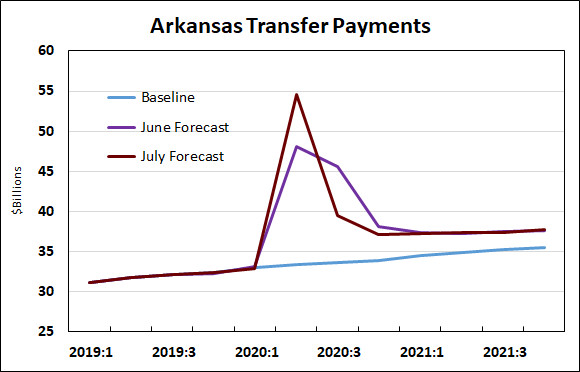 Consumer Spending
Despite the boost to incomes from expected transfer payments, we are still anticipating that the data will show a sharp decline in Personal Consumption Expenditures (PCE) in the second quarter. Nevertheless, recent data on sales tax collections suggest that the decline in consumer spending may be overstated.  If federal stimulus programs are extended beyond current-law deadlines, recovery in the third quarter might be more pronounced.

The July forecast indicates that PCE declined 10.9% in the second quarter, compared to the 12.2% decline expected in the June forecast. 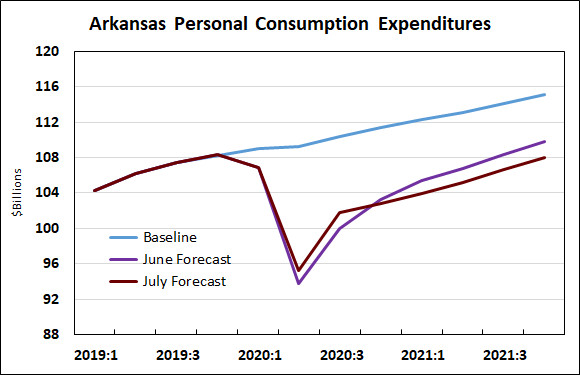 Table 1 compares the July forecast relative to the May and June forecasts for PCE, focusing on the two-quarter impact (2019:Q4-2020:Q2) of the COVID-19-related shutdowns. Projections for many of the components have changed little since last month, while others reflect specific sectoral information collected by IHS forecasters.

The largest revisions are in Durable Goods, for which data on both the national and state level indicate stronger-than-expected demand.  This is particularly true for Motor Vehicles and Parts, for which early projections turned out to be far too pessimistic. The decline in nondurable goods is now expected to be somewhat smaller than the June forecast, while the estimate of spending on services is now slightly lower than in the June forecast. 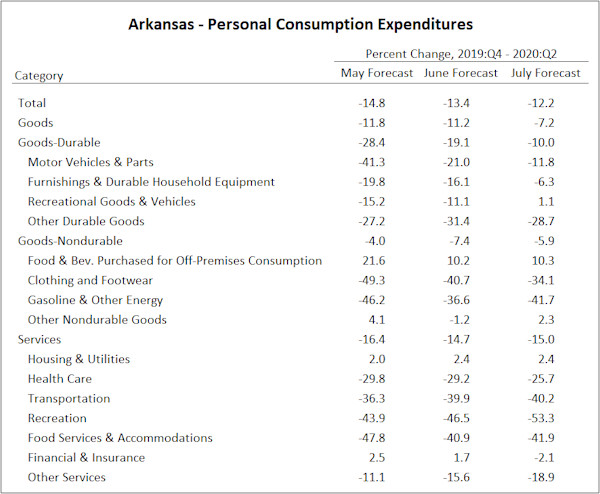 Figure 5 shows index values (relative to 2019:Q4=100), illustrating the relative paths for total PCE, Durable Goods, Nondurable Goods (less Gasoline & Other Energy) and Services. When gasoline expenditures are excluded, nondurable goods purchases are expected to remain relatively stable and increasing over time. Subtracting Food and Beverages Purchased for Off-Premises Consumption, the remaining components are now expected to decline by 7%. Spending on services is expected to decline by 15%.  In the June forecast, durable goods purchase were expected to show the largest decline of any component, over 19%.  The initial decline is now only expected to be only 10%, but growth is likely to remain relatively sluggish in coming quarters. In the current outlook, it is services spending—particularly in those sectors directly related to COVID-19 shutdowns—that show the most significant decline. 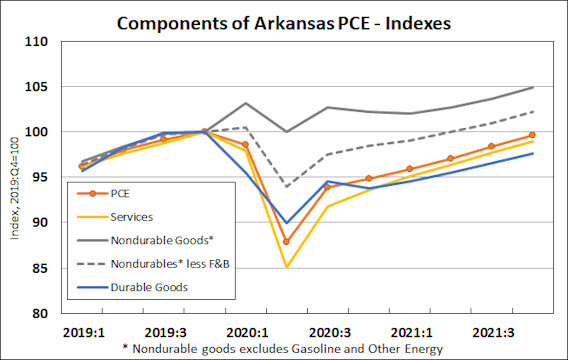 Implications for Local Sales Tax Collections
One of the practical applications of the consumer spending forecast is evaluation of how sales tax receipts by city and county governments might be affected. To assess the sales tax implications, we have been tracking a composite measure that is intended to mimic the taxable sales base. This taxable sales proxy—shown in Figure 6—includes all Durable and Nondurable goods less Gasoline, plus Recreation Services and Food Services & Accommodation.

The outlook for taxable sales has improved in this month’s forecast, for the third consecutive month. The June forecast had shown a decline of 16.1% (from 2019:Q4 to 2020:Q2). The latest forecast shaves that loss down to 12.9%.  Reflecting the more rapid and robust recovery of employment and income that is now projected, the taxable sales base is now expected to rebound more sharply than in either the April or May forecast. 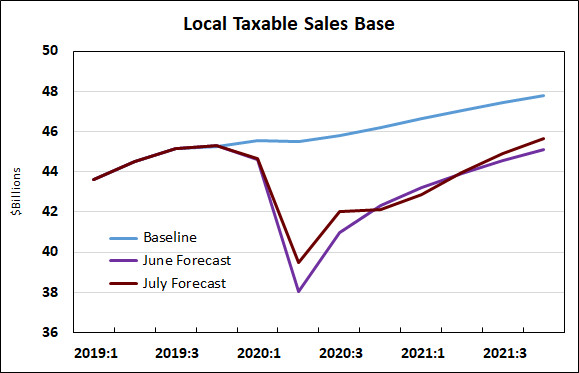 A PDF file of this report can be downloaded HERE.