Recently released data from the Federal Housing Finance Agency (FHFA) shows that house prices in the U.S. continued to decline during 2010, with average house prices down 1.3 percent nationwide.  Here in Arkansas, the decline was somewhat larger — down 2.2 percent.

As shown in the table below, the average price decline for Arkansas is skewed by price changes in the northwest part of the state.  House prices in the Fayetteville-Springdale-Rogers metro area were down 4.1 percent and in Fort Smith prices were down 3.6%.   In the state’s other metro areas, price declines were smaller than the national average.  In Texarkana, house prices were up slightly. 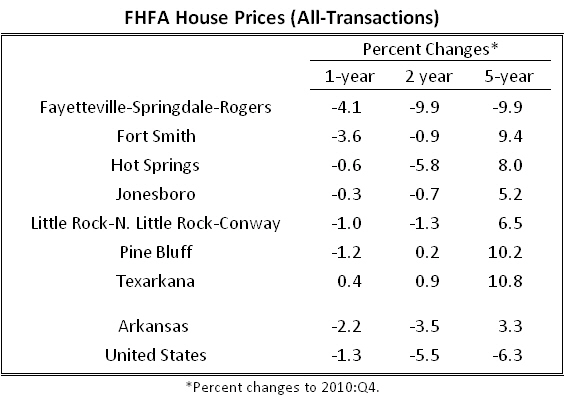 This is the third year of statewide house price declines.   The FHFA housing price index for Arkansas peaked in the first quarter of 2008.   However, the pattern of price changes has differed from one metro area to another.  From 2000 until the peak, house prices in the Fayetteville area had risen by 51 percent.  Over the past 5 years, however, prices in that region are down nearly 10%.  Prices in Hot Springs continued to rise well after the peak was reached in other markets, but have fallen sharply in the past two years.  In the state’s other metro areas price gains in the first part of the decade were more modest — and recent price declines have been commensurately smaller.  Over the past five years, cumulative price changes have been positive in all the state’s metro areas except Fayetteville.