New data from the Federal Housing Finance Agency (FHFA) show continuing appreciation of Arkansas house prices.  As illustrated in the figure below, the FHFA Expanded-Data Index for Arkansas increased in each quarter of 2015.  In the fourth quarter, the index was up 1.1% from the previous quarter, and 3.2% higher than the previous year.  The index for the U.S. — recovering from a significantly sharper decline of 2007-2011 — was up 1.3% for the quarter and 5.6% for the year. 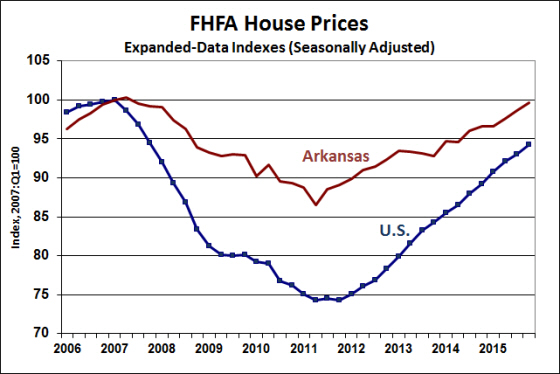 The expanded data indexes are only available at the state level, but the FHFA publishes All-Transactions indexes that cover metropolitan areas as well.  The table below summarizes recent house-price changes in Arkansas’ eight metro areas.  In the fourth quarter, prices were down in Little Rock, Pine Bluff and Texarkana.  For the year, prices were down only slightly in Texarkana, but were higher in all other metro areas (as well as the non-metropolitan portions of the state). 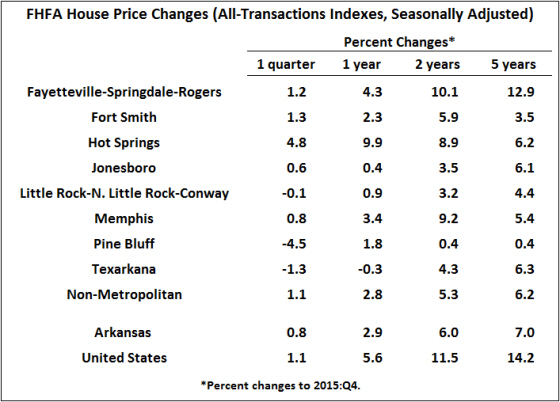 House prices in Northwest Arkansas have shown the most rapid appreciation over the past five years, but are recovering from the largest house-price declines in state during the 2007-2011 period.  In fact, the figure below illustrates that most of the state’s metro and non-metro areas suffered only modest declines during the nationwide housing price collapse, and all have shown at least modest appreciation over the most recent two- to five-year period. 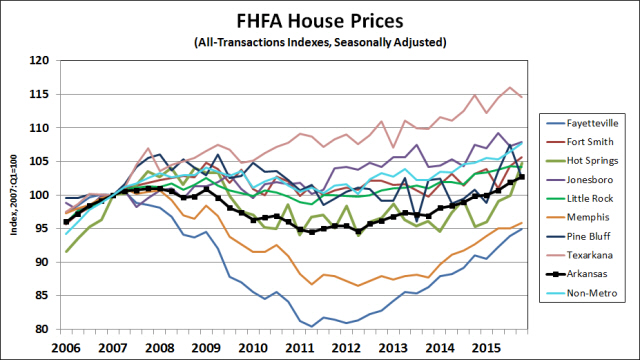