Nationwide, net earnings were up more than 20% compared to the second quarter of 2011.  Earnings of Arkansas banks were up only 3.6% from the previous year, but that comparison is based on relatively stronger earnings among Arkansas banks last year.  Focusing on the most recent quarter-to-quarter change, Arkansas banks saw a 18.4% increase, compared to a slight decline nationwide. 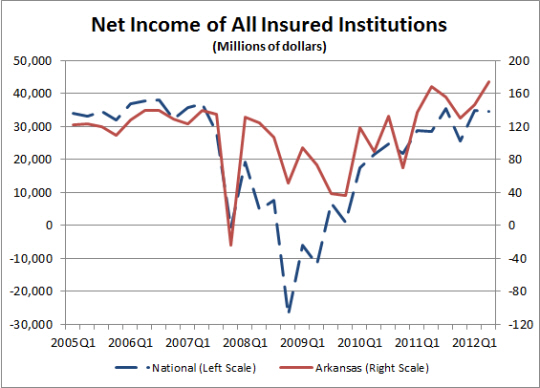 Growth in total loans and leases in Arkansas kept pace with the nationwide average:  Compared to a year ago, loans were up 2.7% nationwide and up 2.5% in Arkansas.

One indication of a healthier banking sector is the ongoing decline in troubled assets.  As shown in the figure below, non-current loans and leases (as a share of the total) continued to decline in 2012:Q2.  As noted in a previous post, much of the run-up in non-current loans during 2010 and early 2011 was driven by Arkansas banks absorbing failing out-of-state institutions.  These troubled assets are carried on the books as non-performing, even though arrangements with the FDIC partially indemnify the losses associated with the takeovers.  More recently, the share of non-current loans at Arkansas banks has fallen sharply over the past four quarters, and is nearly a full percentage point lower than the national average. 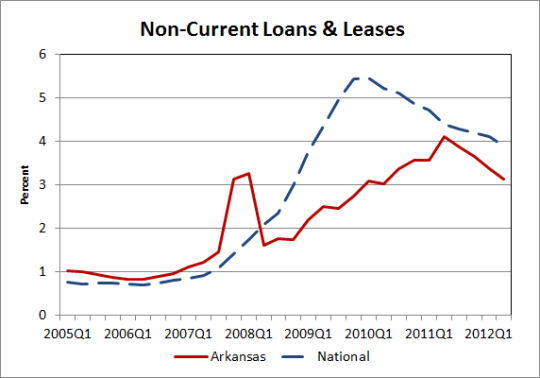 Perhaps the best measure of comparative performance is bank profitability.  As shown in the figure below, the return on assets at Arkansas banks remained positive throughout the recession and early recovery, while average returns nationwide were negative during 2009.  In the most recent quarter, the national average return on assets was 0.99%.  Among Arkansas institutions, the average return was 1.04%.  In four of the past five quarters, Arkansas return-on-assets was above the benchmark level of 1.0%. 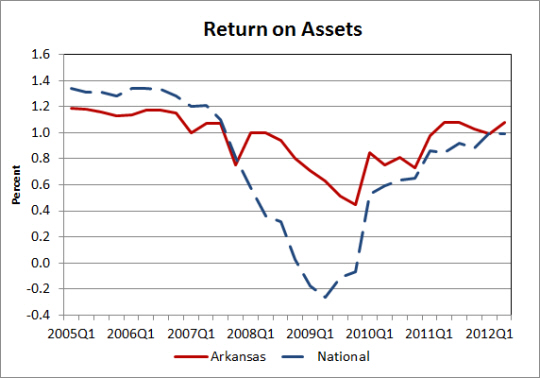