News coverage of the Arkansas Economic Forecast Conference featured the forecast of an “expected future revision of history.”  Just as in 2009, it appears likely that the annual benchmark revision of payroll employment data will include sharply lower estimates for Arkansas employment in 2011.  Compared to currently-published estimates, the revised data will show about 11,000 fewer jobs.

The monthly payroll employment data come from the BLS’s Current Employment Statistics (CES) program.  According the the BLS, the CES surveys “about 150,000 businesses and government agencies, representing approximately 390,000 individual worksites.”  Each year, however, the CES data are revised to match the more-comprehensive Quarterly Census of Employment and Wages (QCEW).  The QCEW is a detailed account of employment, disaggregated by sectors and by counties.  It is constructed from state unemployment insurance records, so it constitutes a full accounting of all covered jobs in the nation.

Because of it’s comprehensive coverage, the QCEW provides a more accurate picture of employment than the CES.  But it also takes longer to compile —  data for the first quarter of 2011 were published just last month.  When the revised CES payroll employment data are released next March, it is this 2011:Q1 QCEW data that will be used as a benchmark.  The benchmark revision process is a detailed exercise that affects data for each individual sector and each state and metro area in the U.S. — that’s why we won’t find out the results until March 2012.

But it is possible to estimate the approximate magnitude of the revisions for Arkansas using simple linear regression techniques.*  Based on this analysis, we forecast that the CES data for Arkansas will be revised sharply downward in the first quarter of 2011 — down approximately 11,000 jobs.  The lower employment in 2011:Q1 will carry through for the rest of the year, resulting in a permanently lower level of employment estimates for 2011. 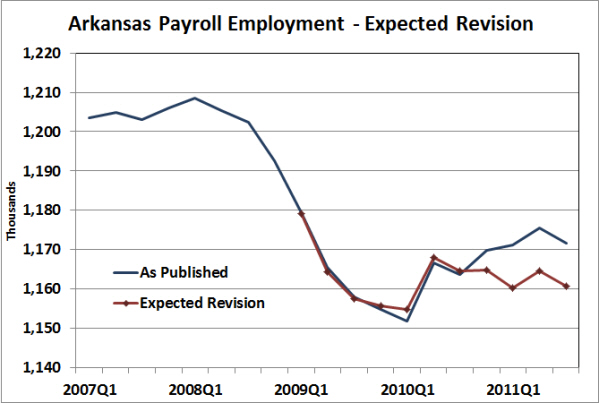 Source: Bureau of Labor Statistics; calculations by the Institute for Economic Advancement.

The revision is not entirely negative.  Revised data for 2010 will show slightly higher employment than the currently-published numbers.  But this tends to exacerbate the negative impact of the revisions on job growth for 2011.  Currently-published data show job growth of 8,000 (0.7%) for the four quarters ending 2011:Q3.  The revised data are expected to show a net decline of 3,200 jobs (-0.3%).

The magnitude of the data revisions also vary by sector.  As shown in the table below, some sectors are likely to show positive net revisions:  Manufacturing and Government, in particular, are expected to be revised upward — each by more than 3,000 jobs.  Downward revisions are concentrated in private-sector service-providing sectors, with Business & Professional Services and Leisure & Hospitality Services registering the largest declines.  Note that the sum of the estimated component-revisions do not add to the total.  Taking the estimated revisions sector-by-sector, the total downard revision is 9,400. 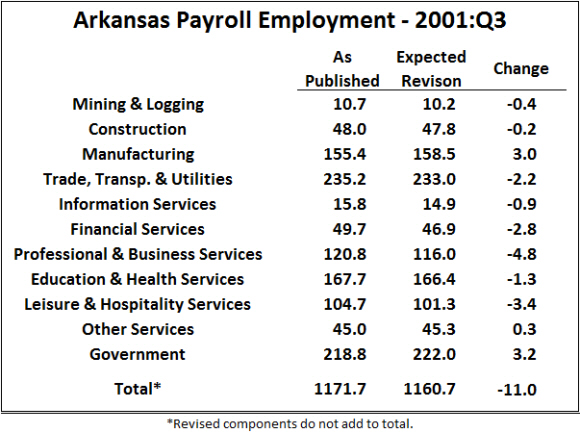 Source: Bureau of Labor Statistics; caluclations by the Institute for Economic Advancement

Whether the total downward revision is 11,000 (as estimated for the total) or 9,400 (as estimated for the sum of super-sector components), the general magnitude of the downward revision is clear.  After all the data are in, it looks like employment growth during 2011 will be close to zero.  In terms of the slow jobs-recovery from the 2008-09 recession, 2011 is shaping up to be a “lost year” for Arkansas.

*The projected benchmark series is calculated using some simple statistical procedures to estimate the  correspondence between the two measures in the past (Jan. 2001-Dec. 2009) and to forecast that relationship in the more recent past (Jan. 2010-March 2011).  For April 2011 through September 2011 (the most recent month availabile for the CES payroll data), month-to-month percent changes are used to extrapolate these estimates forward.  Quarterly estimates are then calculated as the average of monthly figures.