The Arkansas Department of Finance and Administration has published new data on local sales tax collections paid to counties and municipalities in June.  There is generally a one month lag between actual sales and the collection of sales tax and an additional month for the distribution to be made to the local governments.  Consequently, the sales taxes remitted to the counties and cities in June largely reflect sales in April – the month in which COVID-19 related shutdowns are likely to have had their largest impact on economic activity.

We had projected declines on the order of 15% on a year-over-year basis, based on the estimated impact of COVID shutdowns on retail sales.  As it turns out, most counties in Arkansas fared better than that, albeit with significant diversity among counties.  The interactive map below shows the percentage changes in sales tax receipts by county between April 2019 and April 2020 (expressed in terms of taxable sales as an adjustment for tax-rate changes).  The largest decline was in Carroll County (-21.9%), while the largest increase was Calhoun (+42.4%).

There are several possible explanations for the better-than-expected sales tax figures.  First, it might be the case that support from government transfer programs helped maintain consumer spending, in spite of income losses due to layoffs and business closures.  Second, sales tax in Arkansas is collected on more than just final retail sales to consumers; tax collections on other business-to-business transactions might have mitigated the effects of declines in retail sales.  Third, the recent change in the law that required out-of-state retailers to collect and remit sales taxes from Arkansas residents began in July 2019, so that the year-over-year comparison for April includes an expansion of the tax base.

A preliminary analysis of sales tax collections by sector for Pulaski County suggests that all of these factors contributed to the April 2019-20 comparison.  Tax collections in services categories showed the expected declines; for example, Arts, Entertainment, and Recreation was down 45.6% and Accommodation and Food Services were down 41.9%.  In contrast, Retail Trade was down only 2.0%, with large losses in some sub-sectors (e.g. Furniture stores down 29%) offset by others (e.g. Beer, Wine, and Liquor Stores up 40%).  Patterns of consumer spending were affected, but overall consumer spending appears to have fallen less than anticipated.  Increases in sales tax collections were particularly strong in the non-retail sectors;  Collections from Manufacturing (primarily from Iron and Steel manufacturing) were up 234% and taxes related to Construction activity were up 242%. 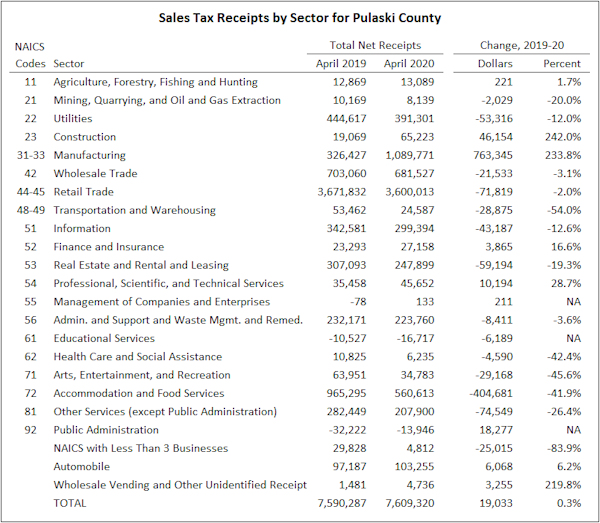 There is also evidence that the collection of sales tax from out-of-state vendors played a significant role in sustaining sales tax collections.  In the Pulaski County data, sales tax collections from Sector 4541, Electronic Shopping and Mail-Order Houses, was up 205%.  Without this component, the total for Retail Trade would have declined 8.6% instead of 2.0%.

In order to approximate an impact of internet sales tax collections on the county statistics, the interactive map below compares the year-over-year growth rate for April, relative to a trend growth rate that is calculated as the average of year-over-year changes from July 2019 through February 2020 (corresponding the the period since out-of-state vendors were required by law to collect and remit taxes).  With this adjustment, the relative performances of counties changes little, but the interpretation of the numbers is altered.  For example, the raw April-April growth rate for Garland County was -9.2%.  Compared to a trend rate of growth averaging 10.2%, the April growth rate is 19.5% below trend (after rounding).

One other factor that should be considered:  The correspondence between sales in April and taxes remitted to the counties in June is a general, but not exact relationship.  Not all tax reporters submit monthly, and the tax receipts are reported for the month in which they are received.  Any extraordinary effects of reduced taxable sales in April are likely to be reflected, in part, in subsequent monthly reports of tax remittances.

Data for city and county tax collections, broken down by NAICS-code sectors, are available for all tax jurisdictions in Arkansas.  We will continue to monitor and analyze these data in our continuing efforts to gauge the impact of COVID-19 (and efforts to prevent its spread) on the economy of Arkansas.

Note:  Monroe County has no countywide sales tax and Saline County initiated one in April 2019.  For these two counties, the taxable sales figures reported are aggregates of the cities with sales taxes in those counties.