Collins vs. Brummett on State Income Taxes: A Comment

Over the past few weeks, columnist John Brummett and state Representative Charlie Collins have been engaging in a public debate about Collins’ suggestions for modifying the personal income tax structure in Arkansas.  Collins’ proposal is to eliminate the second-lowest 2.5% tax rate (lowering it to 1%), to eliminate the highest 7% tax rate (lowering it to 6%), and to raise the threshold at which the new highest rate would kick in.  The threshold would be raised in phases for “higher income levels (six-figure earners) … over time.”  (He has been cited as suggesting that the threshold increase by $20,000 per year.)

In a recent column, Brummett called these calculations “superficial and misleading.”  He calculates that for a taxpayer making $7,800 in adjusted taxable income per year (after exclusions and deductions) the tax savings from Collins’ plan would be about $60, and for a taxpayer with $252,600 in taxable income per year the tax reduction would be $2,200.  He cites this comparison as being fundamentally “unfair,” and asks the rhetorical question: “What’s the percentage of the better deal the well-off guy gets with $2,200 than the poor guy gets with $60?”

So who is right?  Actually, that’s a complicated question.  Both Collins and Brummett are factually accurate, but neither tells the whole story.  Each picks particular comparisons to support his case, missing some of the more general and subtle implications of the proposed plan.  And more importantly, they are addressing somewhat different questions.   The Arkansas Economist decided to weigh-in on this debate in an effort to provide a common-denominator, in the hope of clarifying some of the issues that underlie the disagreement. 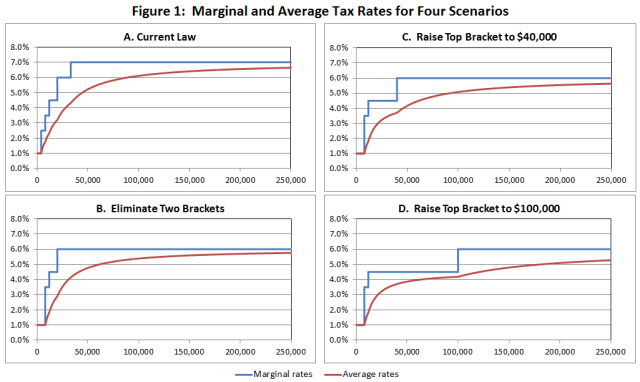 Source: Arkansas Department of Finance and Administration, and author’s calculations

Having made the distinction between marginal tax rates and average tax rates, which one matters?  Collins’ main argument is that lowering tax rates will boost economic growth, and in this regard his focus on marginal rates is appropriate.  Economists generally consider decisions are made on the margin:  when considering an action that would change a taxpayer’s income, the question is “how will taxes affect my net income from one additional dollar earned in gross income?”

But for comparing the magnitude of tax cuts for different income levels, the average tax rate is a more appropriate measure. Collins’ calculations using marginal tax rate changes amount to making comparisons at very specific points along the income distribution, with the changes in marginal tax rates serving as an approximation of the impact on taxes paid (since the total tax bill is actually a composite of marginal rates).

Brummett is even more explicit about comparing a limited number of cases.  In particular, he considers two extremes:  One taxpayer with income of $7,800 and another with an income of just over $250,000.  Figure 2, below, generalizes Brummett’s argument.  Figure 2 shows the total tax reduction (in dollars) as a function of taxable income.  At the lowest income levels, the tax reduction amounts to $60 (as Brummett calculates).  This figure applies to all incomes in a range from $8,000 up to $19,900, the current 3.5% and 4.5% marginal tax brackets.  These marginal tax rates are unchanged by Collins’ proposal, but the elimination of the 2.5% tax bracket lowers total (and average) taxes.  Brummett’s other extreme is a taxpayer making over $250,000 in adjusted taxable income.  After the elimination of the two tax brackets, a taxpayer with this income receives a tax cut of about $2,200.  Note that by ignoring the proposed increase in tax-rate thresholds, Brummett actually underestimates the savings for these taxpayers would enjoy under Collins’ complete plan.  After the threshold for the new highest rate has reached six figures, the total tax savings for a taxpayer with $250,000 in taxable income is about $3,400. 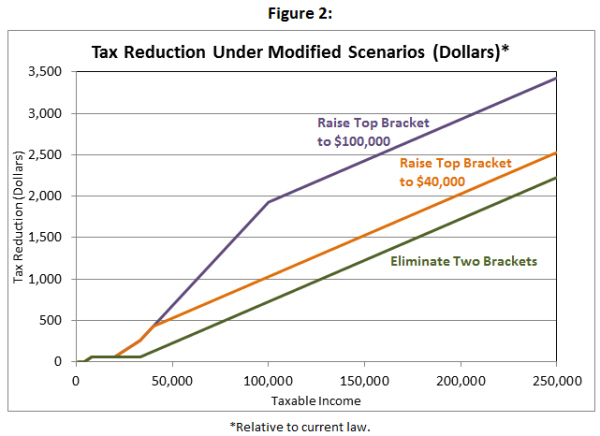 So does this mean that Brummett is correct about the innate unfairness of the plan?  No, not really.  His comparison of two extreme cases, generalized in Figure 2, amounts to nothing more than an observation that any across-the-board tax cut results in larger tax reductions (in absolute dollar terms) for those who pay the most taxes in the first place.

Typically, those who emphasize “fairness” in the tax structure are focusing on progressivity.  For example, no one expects that Warren Buffet has a lower total tax bill than his secretary, but the controversy about fairness focuses on whether or not he pays a lower average tax rate (there’s that average tax rate again!).  An across-the-board tax cut proposal like Collins’ could conceivably result in a universally more progressive tax structure, but it would still display the pattern shown in Figure 2.

Economists have no special insight on whether a tax structure is “fair” or not, but we can describe objectively whether one tax structure is more progressive than another.  To do so, we need to consider the pattern of tax reductions in percentage terms.  This is precisely equivalent to looking at the percentage change in average tax rates.  One tax regime is considered more progressive than another if larger proportionate tax cuts go to lower income tax payers and vice versa.

Figure 3 shows how these percentage changes work out under the Collins plan.  Under each of the modified scenarios, the largest tax cuts in percentage terms are for taxpayers with adjusted taxable incomes of around $8,000.  So, Brummet’s hypothetical low-income taxpayer with his $60 tax cut receives the largest proportionate reduction of any income category — around 42%.  Note that this is somewhat less than the 60% reduction calculated by Collins using changes in marginal tax rates. 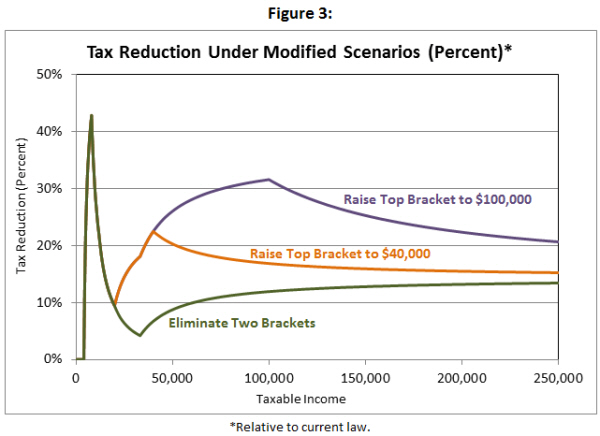 Without any change in the threshold level for the highest marginal tax rate, the proportionate tax saving falls off sharply over the income range of $8,000 to $33,000.  The smallest tax cut, 4.2%,  goes to a taxpayer with adjusted taxable income of $33,200 (the current level at which the 7% rate kicks in).   From that point, the proportionate tax savings is increasing in income.

Over the range from $8000 to $33,200, we can state unambiguously that the elimination of the two tax brackets increases the progressivity of the tax structure.  More generally, one can select any two or three points along the income distribution to show that progressivity has increased or decreased.  The important point is that such comparisons are specific to the particular points chosen.  A tax reform plan is universally more (less) progressive if the percentage tax savings are decreasing (increasing) in income over all income ranges.

Note that increasing the threshold where the maximum tax rate takes effect introduces a much different pattern of progressivity over higher income levels.  With no change in the threshold, the tax cuts become proportionately larger for higher incomes.  But increasing the threshold leads to a boost for those with incomes between $19,900 and the new higher cut-off level.  Raising the threshold to $40,000 increases the percentage tax cut for someone at that level of income by 22.5%.  Raising it to $100,000 implies a tax cut of 31.6% for taxpayers with adjusted taxable income of $100,000.  In either case, the percentage change in taxes is decreasing for incomes above the new threshold.  That is, raising the threshold has the effect of introducing greater progressivity into the upper end of the tax structure.

Of course, the issue of fairness and progressivity reflects only one dimension of a complex issue.  Collins emphasizes the positive effect his proposal would have for economic growth.  Brummett points out that lower income tax revenues for the state have to be made up for by increasing other taxes or cutting government spending.  Both points are valid, but the key question in each case is “how much?”  In the end, these questions are arguably more important than the progressivity issue — but are beyond the scope of this brief comment on the recent debate.