CORRECTION – 9/6/12:  Due to a data transcription error, the previously-reported final figures for June 2012 (and hence, the second quarter) were incorrect.  The text, tables, chart, and downloadable spreadsheet below have been revised to reflect the corrected data.  The change results in year-over-year increases for ATS and ATSIG that are 0.1% higher than previously reported.

The final pieces of information are now available for calculating second-quarter Arkansas Taxable Sales (ATS).  Due to particularly weak sales and use tax collections in July (corresponding to June sales), ATS declined 0.5% from the first quarter of the year (seasonally adjusted).  The preliminary estimate had shown a decline of only 0.3%.  Gasoline sales were also lower in June than previously estimated, so Arkansas Taxable Sales Including Gasoline (ATSIG) declined even more sharply — down 1.4%.  The quarterly declines represented a slowdown in longer-run growth:  Compared to a year earlier, ATS was up 4.6% and ATSIG was up 3.9%. 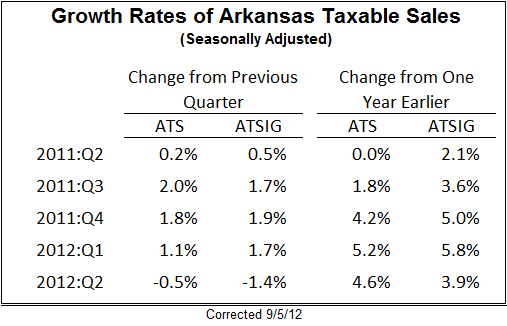 The figure below illustrates that the second-quarter weakness in sales was primarily concentrated in June.  A single monthly data observation is never enough to establish a trend — it is always possible that the sales decline in June was a statistical anomaly.  Given the concurrent slowdown in national retail sales in the second quarter, however, the latest data on ATS provides some cause for concern about the robustness of Arkansas’ economic growth over the summer months.  We’ll be closely monitoring third quarter data as it emerges. 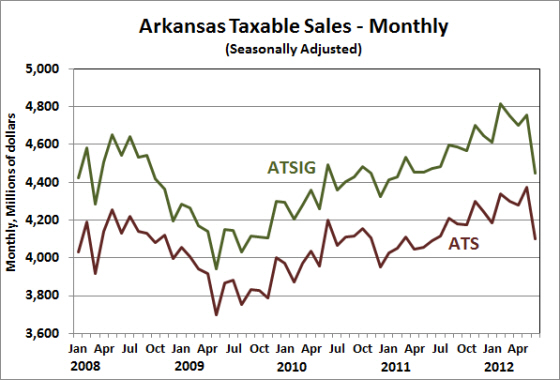