After a brief weather-related contraction in February, consumer spending surged in March and remained elevated in April.  Data for Arkansas Retail Sales shows that spending patterns in our state are matching the national data, with even larger increases relative to pre-pandemic levels.* 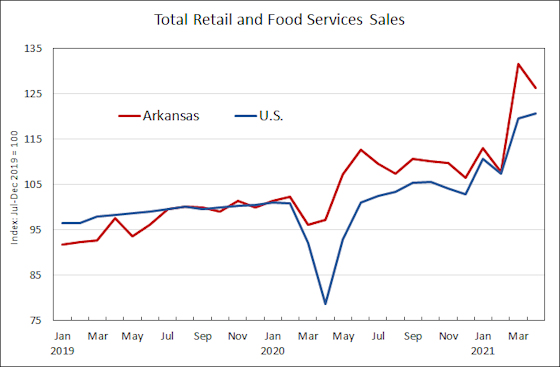 Severe snowstorms hit Arkansas relatively hard in February, but March saw a rebound amounting to a 22% increase for the month, nearly doubling the 11.3% surge in U.S. Retail Sales.  Sales in every three-digit industry group showed sharp increases, ranging from 7.5% at Food & Beverage Stores to 48% at Clothing Stores.  The relative magnitude of increase across sectors was similar in the nationwide data, with the largest increases tending to be associated with the sectors that experienced larger declines in February.  In April, Arkansas Retail Sales were down nearly 4%, but remained well above recent levels.  Gains and losses were mixed, but sharp declines in Motor Vehicle and Parts Dealers, Electronics and Appliance Stores and Food and Beverage Stores.  The decline in the Motor Vehicle sector is likely overstated: data limitations inhibit our ability to measure and incorporate recent increases in new and used car prices into the data. 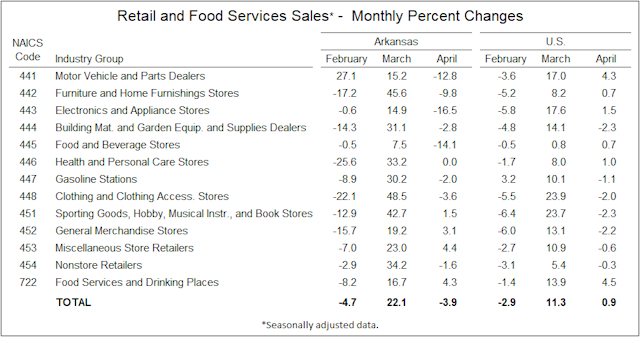 As indicated in the chart for total Retail and Food Services Sales above, consumer spending is far higher now then before the COVID-19 pandemic struck the economy in March 2020.  As measured from a baseline of July-December 2019, the average for March and April 2021 is up over 20% for the U.S. and up nearly 29% in Arkansas.  In both the state and national data, increases are widespread across Retail Trade sectors, but remain lower at bars and restaurants—at least in the nationwide data. 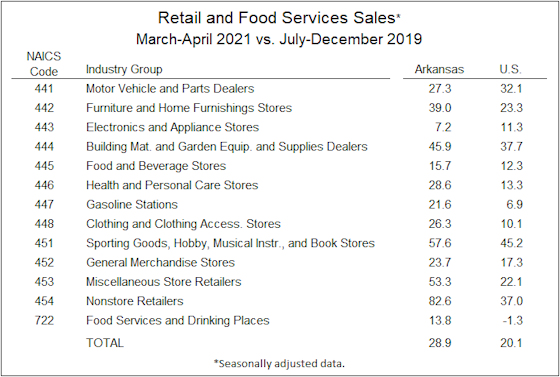 Here in Arkansas, however, sales at Food Service and Drinking Places had been running at nearly the same pace as late 2019 for several months, and the March-April spending surge pushed total spending well above pre-pandemic levels:  In April, sales at Arkansas bars and restaurants were 16% higher than in late 2019.  Nationwide, spending at bars and restaurants recovered to pre-pandemic levels for the first time. 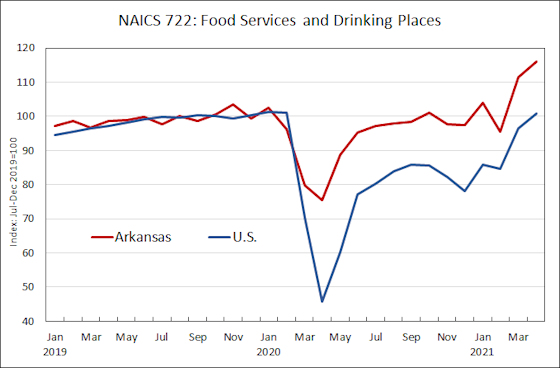 At the county level, our data covers Retail Sales excluding gasoline stations (not seasonally adjusted).  As shown in the interactive map below, there is no county left behind when it comes to rising consumer spending.  Again comparing March-April averages to levels in the second half of 2019, Prairie and Arkansas Counties have shown the smallest increases, up 7.5% and 11.6% respectively.  At the other extreme, Woodruff County was up 49.4% and Fulton County was up 54.5%.  The median growth among counties was 36.1%.

*Technical Note:  The methodology for calculating Retail Sales for Saline County has been updated to incorporate the county-level sales tax that was implemented in April 2019.  In earlier versions of the data set, we used aggregates of sales tax collections for the cities of Saline County, scaled to approximate total county-wide spending.  Actual county-level data are now used for the period December 2019 forward, with scaled sum-of-cities data (for each three-digit industry group separately) spliced to cover the period July 2017 through November 2019.