The final data for 2021 are in: Arkansas Retail Sales soared in the spring, remained strong through mid-year, and ended with a fourth quarter surge.  On an annual average basis, Arkansas retail sales rose 17.6% from 2020 to 2021, compared to an increase of 19.3% in the nationwide data.  On a fourth-quarter to fourth-quarter basis, the increase was 17.4% compared to a 17.1% increase for the nation. 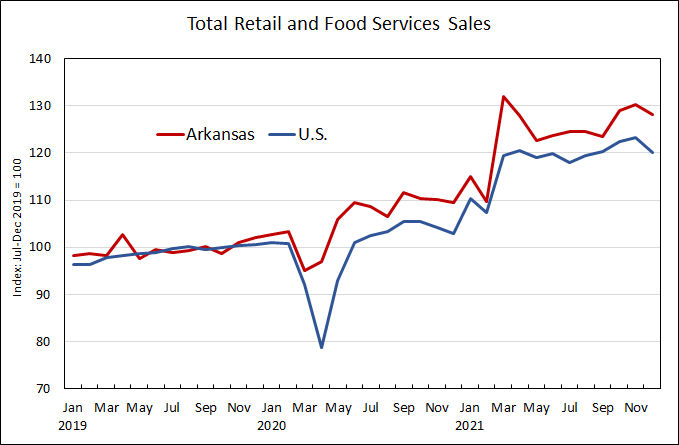 As shown in the table below, the increase in sales in 2021 included all major retail sectors, with only Food and Beverage Stores and General Merchandise stores showing less than double-digit gains.  The 2021 surge followed a relatively strong sales year for Arkansas in 2020. Cumulatively, from the fourth quarter of 2019 through the fourth quarter of 2021, Arkansas retail sales were up 28.5%, compared to 21.6% in the U.S. data. 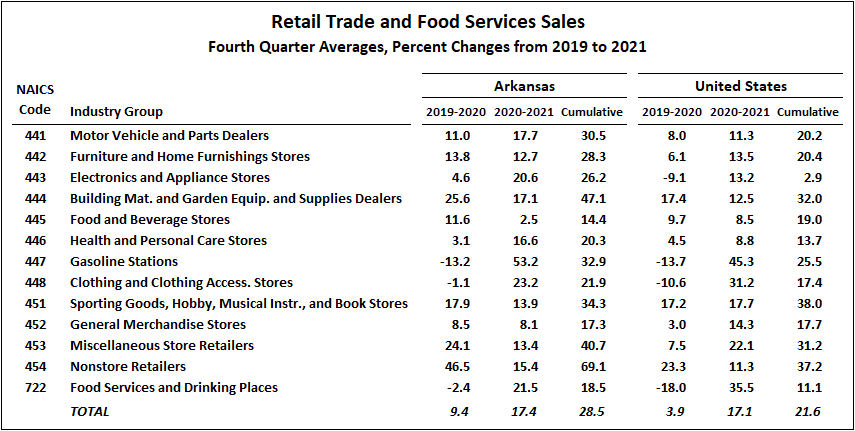 Data for NAICS sector 447, Gasoline Stations, uses data for gasoline sales from the state’s motor fuel tax (gasoline is not subject to sales tax).  In addition, the treatment of automobiles in local sales tax collections means that sector 441, Motor Vehicle and Parts Dealers, tends to overstate the sales that translate to county-level totals for that sector.  Therefore, in order to compare retail sales across counties it is useful to consider Retail Sales excluding Gasoline and Autos.  Statewide, this aggregate increased by 27.0% from the fourth quarter of 2019 through the fourth quarter of 2021.  The map below shows that increases for counties across the state varied considerably.

Although retail sales growth from 2019 through 2020 tended to be strong throughout the state, cumulative growth for the two years through 2021 tended to be higher in the northern and western parts of the state, and somewhat slower in the South and East.  There is also some tendency for counties that are mostly or completely rural to have experienced higher growth rates than those that are considered mostly urban.

As shown in the chart below, the downturn in sales that is prominent in the U.S. data for April 2020 is only visible for mostly-urban counties in Arkansas. Moreover, the rapid growth of retail sales in 2020 and 2021 is more prominent for rural counties than for urban counties.  In part, these patterns reflect the nature of the economic sectors that were affected by pandemic-related closures, but the patterns also reflect the increased prominence of online sales during the pandemic.  Urban counties with active brick-and-mortar retail sectors tended to lose sales to more rural counties, as sales tax remittances are directed to the county of residence, rather than the county in which the retail outlet is located.  To the extent that e-commerce continues to represent an increasing share of total retail sales, this pattern is likely to persist. 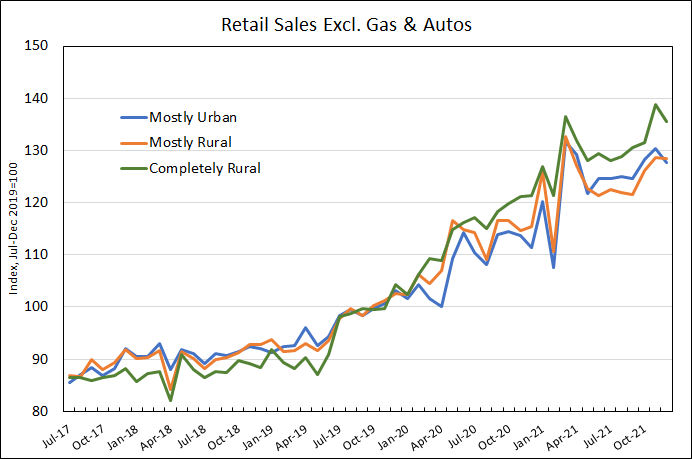 Documentation of Methodology is available here: Arkansas Retail Sales—A New Data Set from AEDI.
NOTE:  In this release of data for December 2021, the seasonal adjustment procedure has been updated from the crude regression-based approach used in earlier analyses.  With data now covering over four years, it is now possible to implement more sophisticated techniques.  Specifically, we have implemented a version of the Census X-13 ARIMA model to seasonally adjust the data by sector.