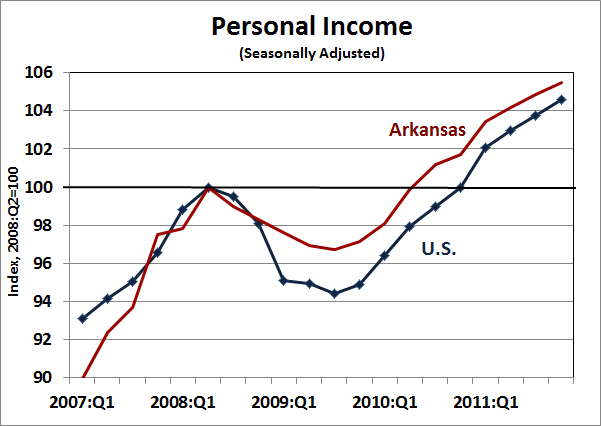 Excluding government transfer payments, the decline in incomes during the recession was substantially larger than for total personal income, and the recovery has taken correspondingly longer.  The latest data show that Personal Income Less Transfers (PILT) rose by 4.8 percent in Arkansas during 2011 (Q4/Q4).  For the U.S. overall, PILT was up by 5.8% over the same period.  For both Arkansas and the U.S., a slowing pace of transfer payments was a factor dampening total income growth over the second half of 2011.  As measured by PILT, Arkansas remains somewhat ahead of the nation in terms of economic recovery:  At the end of 2011, PILT was 2.5% above its previous cyclical peak in Arkansas, and only 1.7% higher for the U.S. 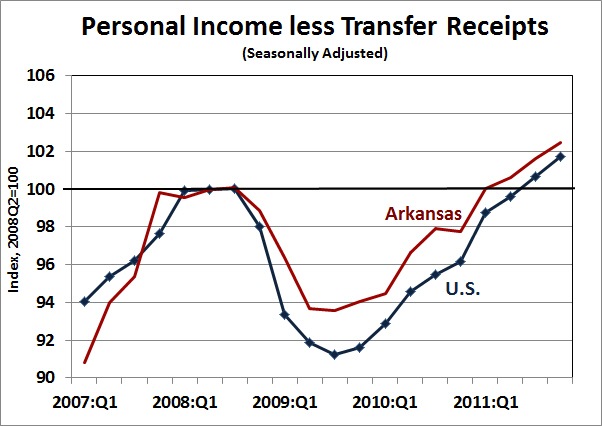 One consideration to bear in mind when evaluating personal income statistics is that they are not adjusted for inflation.  Typically, the the national price index for personal consumption expenditures is used to adjust the nominal figures for inflation.  By this measure, prices rose 2.5% in 2011, so the 3.7% increase in nominal per capita personal income correponds to a real (inflation-adjusted) increase of only 1.2%.