The Arkansas legislature adopted major income tax legislation this week, with the accomplished goal of lowering the marginal tax rate on high incomes from 5.9% in 2021 to 5.5% in 2022, with further reductions scheduled for subsequent years that would reduce the top marginal tax rate to 4.9% in 2025.

But one quirky feature of the Arkansas tax code results in an anomalous income bracket for which the effective marginal tax rate is actually 15.5%.  Moreover, over this particular income range, the tax code contains over 60 “tax cliffs” in which small increases in pre-tax income can result tax hikes that actually reduce after-tax income.

The reason for this anomaly is Arkansas’ dual tax table arrangement, where incomes up to a certain threshold are subject to one table, while there is a completely different tax table that applies to incomes above that threshold. 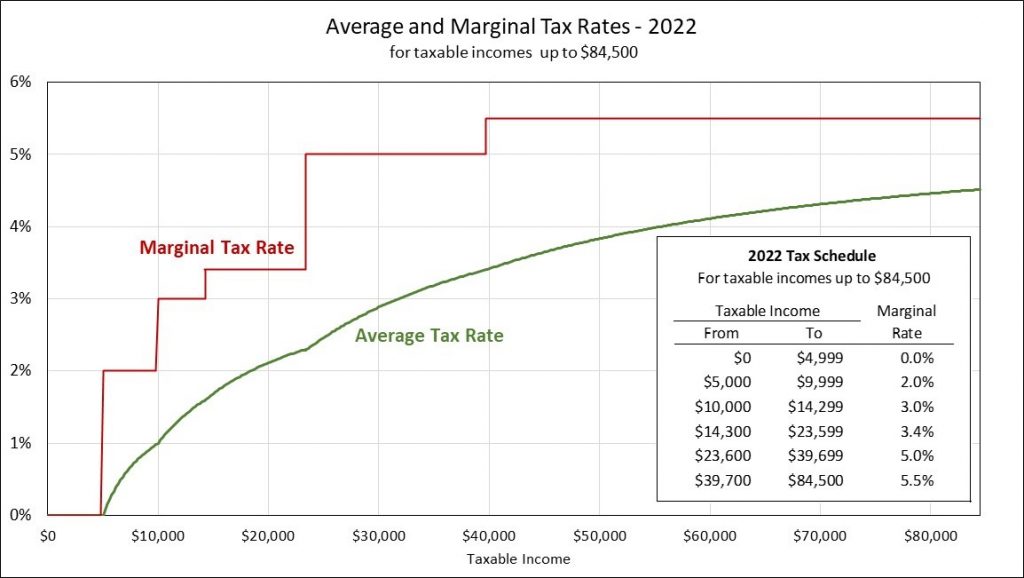 But Arkansas’ dual tax-table system includes a more significant break, where the entire tax table changes for incomes above a certain threshold.  In the new legislation, this break-point is $84,500.

But however it is described, this presents a problem.  The tax for an income level of $84,501 turns out to be $620 higher than it would be if the lower income table was used. That would be an effective marginal tax rate of over 60000% for that 84,501st dollar of income.

That’s what is known as a “tax cliff.” When statutory thresholds become significant enough that people might change their economic behavior (or at last their tax-reporting behavior) to account for quirks in the tax system, then resources are likely being spent inefficiently.  Here at the Arkansas Economist, we pointed out the problem with tax cliffs when the multiple tax-table system was first introduced in 2015.

The Arkansas legislature’s solution to this problem in 2021 has been to introduce over 60 little tax cliffs to the mix.  The new system of “Bracket Adjustments” specifies that anyone with a taxable income of $84,501 to $84,600 is entitled to a tax-reduction of $620.  For each $100 beyond that, the bracket adjustment is reduced by $10, until it reaches zero for incomes above $90,600.

Figure 2 illustrates the multiple tax cliffs in the new legislation, showing the stair-step nature of the bracket adjustment effect on average tax rates. 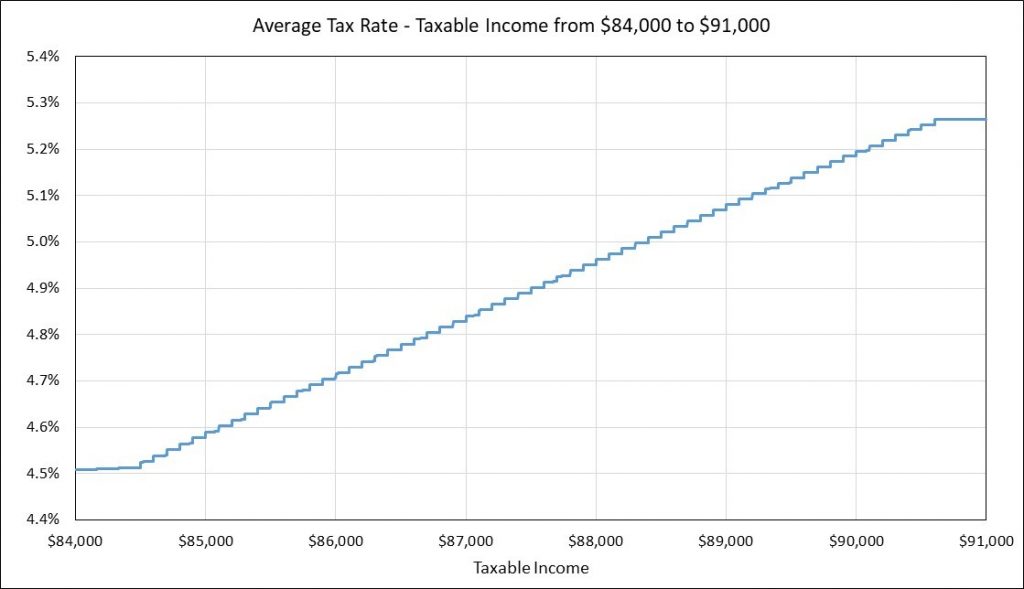 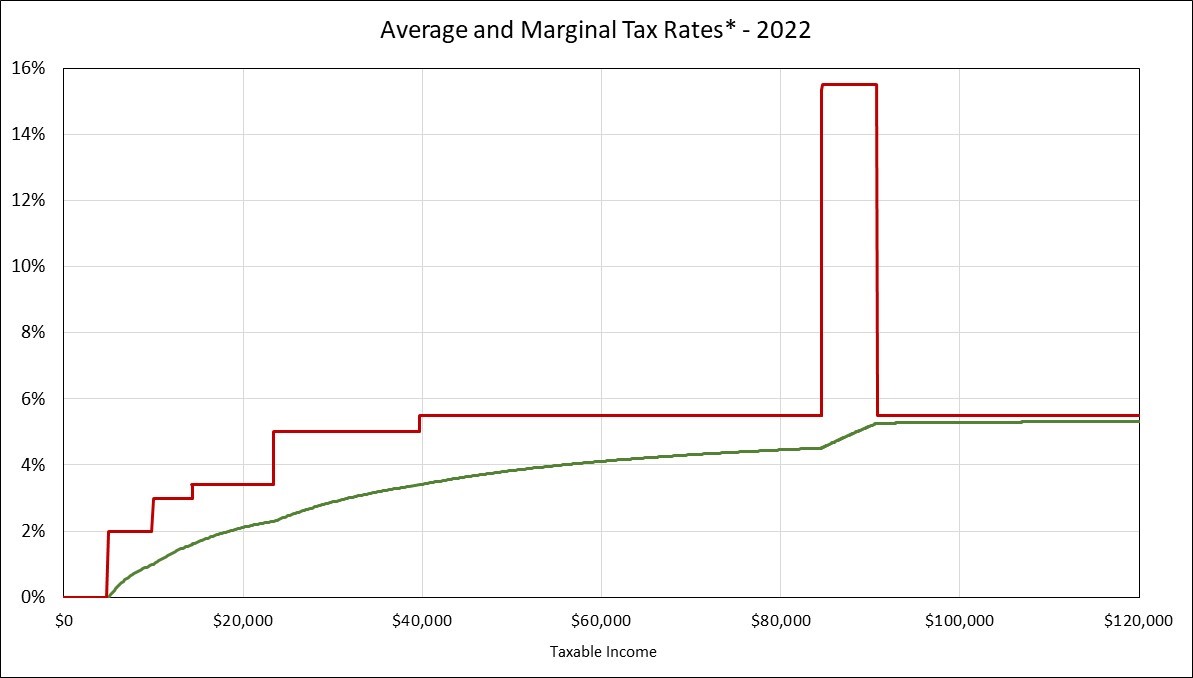 So, under the assumption that $100 increments are an appropriate measure of “marginal” that matters to taxpayers (at least those in the bracket-adjustment range), we might expect people to take measures to avoid the 15.5% marginal tax burden.  Those efforts represent the efficiency loss of the tax system’s complexity.

To further illustrate the point, let us consider a tax system that is roughly equivalent to the newly adopted regime, but one that eliminates the tax cliffs.  The calculations underlying Figure 3 provide guidance for how to construct such a system.  Taking the marginal tax rates from the lower-income tax table, extending the table to impose a 15.5% explicit marginal rate on incomes between $84,500 and $90,700, with a return to the 5.5% marginal rate for incomes above $90,700, we can reconstruct an average tax profile that is virtually indistinguishable from the one shown in Figure 3.

Zooming in on the bracket-adjustment range shows how this hypothetical unified tax table eliminates the stair-step nature of the tax cliffs while retaining the ramping-up of average tax rates—revealing the relevance of this near-observationally equivalent representation of the newly-adopted tax code. 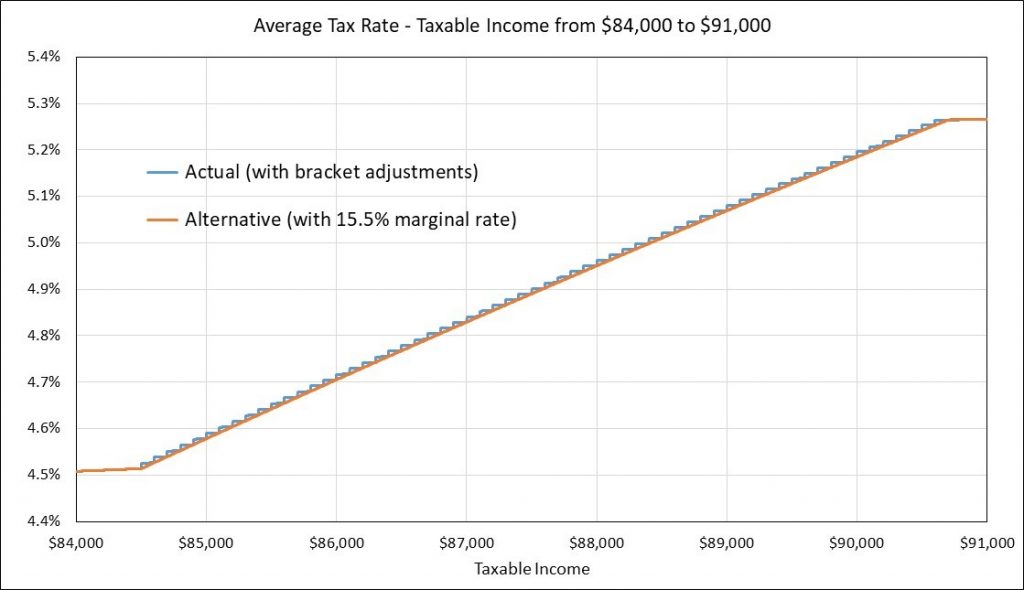 So, in a very real sense, the new tax code includes a 15.5% effective marginal rate over a specific range on incomes.

But does this all matter?  When it comes to a static analysis government revenue, the relevant measure is how the average tax rate schedule and the population income profile overlap. That is also true when it comes to the tax burden on individuals.  But when it comes to economic decision-making, marginal calculations matter  To the extent that the tax-cliffs and brackets with high effective marginal rates affect taxpayer behavior, a static revenue projection might be overstated relative to a dynamic analysis that takes tax-avoidance behavior into account.  Ultimately, whether the effect is quantitatively significant or not is an empirical question.