The Federal Housing Finance Agency (FHFA) has published new statistics on house prices across the nation.  The data for Arkansas continue to show an upward trend in prices, but with slower rate of appreciation than the nationwide average.  The most comprehensive of the FHFA indexes, Expanded Data Indexes†, show that house prices in Arkansas rose 1.2% in the second quarter of 2017, compared to an increase of 1.7% for the U.S.   Year-over-year growth rates were 4.2% for Arkansas and 6.7% for the U.S. 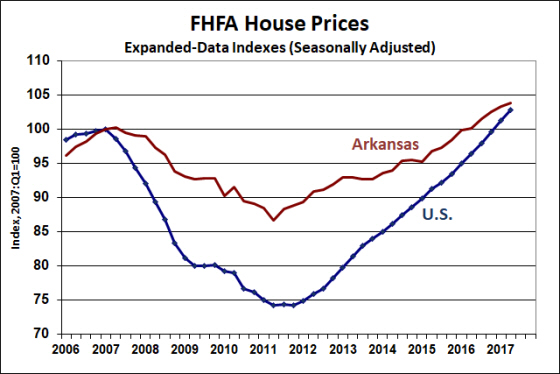 Increases in Arkansas house prices have been consistently lower than the nationwide average throughout the post 2011 housing recovery.  In part, this is simply a function of having experienced a less severe downturn during the 2007-11 housing price collapse.  Compared to the beginning of 2007, the net increase in housing prices in Arkansas has been 3.9% while the comparable figure for the U.S. average is 2.8%.

The Expanded Data indexes are not calculated for metropolitan areas, but the FHFA does publish figures for its All-Transactions Indexes†.  By this measure, house prices increased in the second quarter throughout much of the state, with quarterly declines registered for Fort Smith and Pine Bluff.  Prices in Jonesboro were essentially unchanged.  Over the past year, prices have risen in all metro areas except Pine Bluff, which has seen a decline of 7.9%. 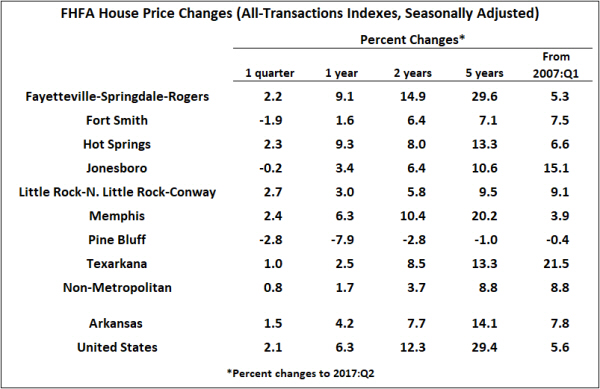 Over a longer span of time, it is clear that Fayetteville and Memphis are seeing the most rapid rates of appreciation.  As illustrated in the figure below, these were also the metro areas that suffered the largest price declines during the period of falling prices.  Meanwhile, house prices in Texarkana and Jonesboro have not increased as rapidly in recent years, but were largely unaffected by the housing price collapse.  Compared to 10 years ago, the metro area with the greatest house-price appreciation has been Texarkana, with Jonesboro also registering above-average increases. 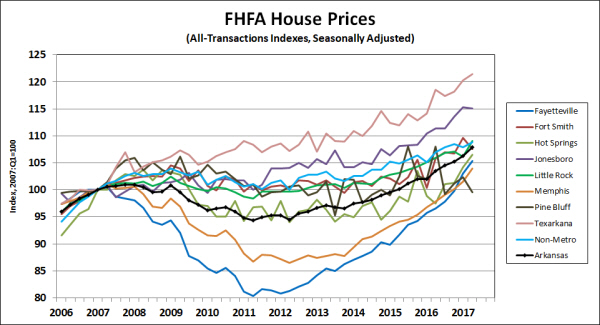