The latest house price data from the Federal Housing Finance Agency (FHFA) showed continuing appreciation at the end of 2014.  According to the FHFA Expanded-Data Indexes, Arkansas house prices rose 0.6% in the fourth quarter (seasonally adjusted), and were up 3.0% for the year.  This compares to a quarterly increase of 1.3% nationwide, and a 6.0% annually.  As shown in the accompanying chart, the slower pace of house price appreciation in Arkansas is largely attributable to the fact that the drop in house prices from 2007-2011 was not as pronounced in Arkansas as in many parts of the country, so the rebound is not as rapid.  The fourth quarter figure for Arkansas shows house prices approximately 3.3% below their levels in the second quarter of 2007.  This is roughly consistent with the latest data from an alternative source of home-price data, CoreLogic®, which shows house prices being 3.8% below their previous cyclical peak in mid 2007. 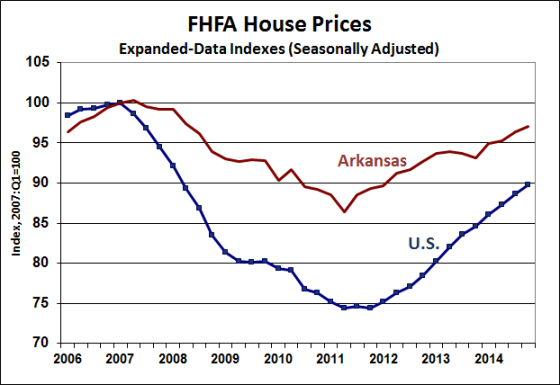 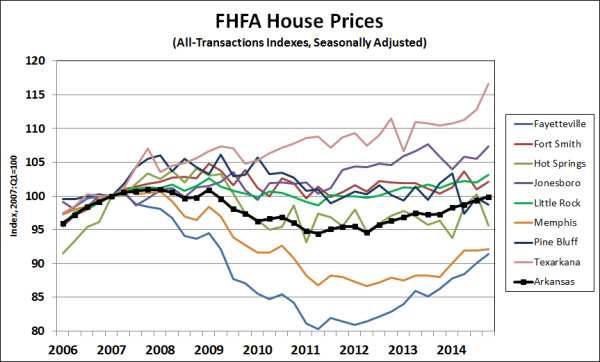 The table below summarizes house price changes in Arkansas metro areas over the past 5 years.  Of the eight metro areas that include parts of Arkansas, only Hot Springs and Pine Bluff have shown recent declines.  Over the past two years, metro area which has exhibited the largest house price increases is Fayetteville, where house prices declined the most during the nationwide house-price decline.  A similar situation holds in Memphis, where the declines during 2007-2011 were larger than in other parts of Arkansas, but a significant rebound in prices has taken place in the past two years.   Texarkana is an unusual case:  Recent house price increases in Texarkana have been larger than in several of the other metro areas in the state, but there was never any significant house price declines recorded in Texarkana during the housing bust.  So over the past 5 years, house prices in Texarkana have increases more than any other metro area in the state. 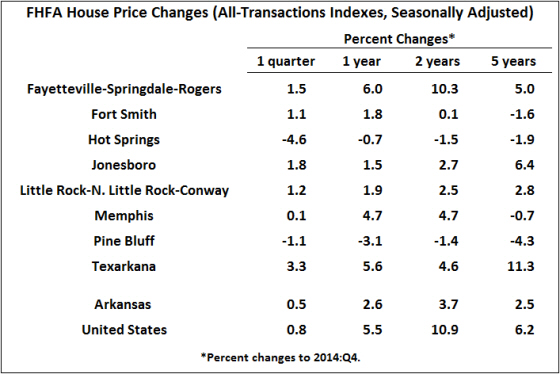