The final home sales report for 2014 from the Arkansas Realtors® Association showed December home sales at 2,107, up by 6.8% from December 2013. For the year as a whole, sales were 28,453, up 4.5% from the previous year.  As shown in the figure below, December is typically one of the slower months of the year for home sales so the monthly total contributes less to the annual total than do the summer months.  Nevertheless, the data for December 2014 show a slight uptick from the previous month. 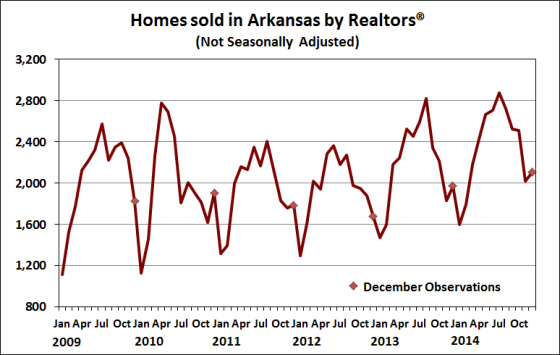 After smoothing out recurring seasonal fluctuations, however, the seasonally-adjusted data in the next figure show that December was actually a bit weaker than the trend that prevailed during 2014.  That is, the uptick in the raw data was smaller than would be expected for a typical December given the previous trend.  Overall though, the one-month downtick in the seasonally-adjusted series is not unusual and does not necessarily indicate any sign of a sustained slowdown. 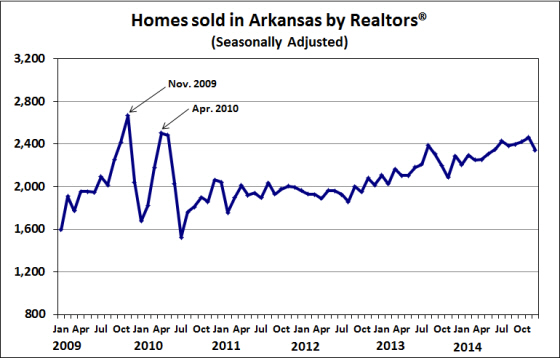 In fact, month-to-month fluctuations in the home sales data are common.  The home sales figures are based on closing dates, and there can be considerable variability in the accounting — particularly when weekends fall near the end or beginning of the month.  Moreover, the data are often revised when home sales are entered into the MLS database after the housing report has been issued.  So it is useful to look at the data after smoothing out seasonal fluctuations AND month-to-month variability.  The quarterly figure below makes both adjustments.  When considering the fourth quarter of 2014 as a whole, home sales continued to follow an increasing trend. 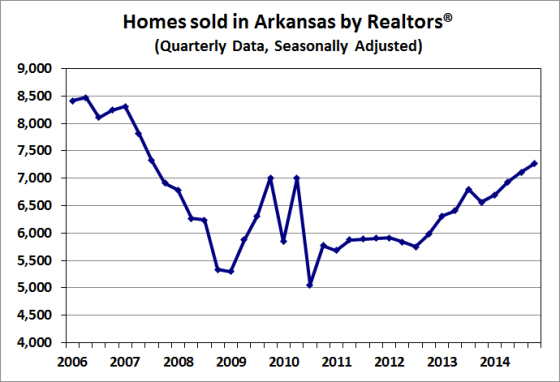