The latest home price data from the Federal Housing Finance Agency (FHFA) shows Arkansas home prices continuing to rise in most parts of the state, albeit at a somewhat slower pace than the national average.  According to the FHFA’s “Expanded Data Indexes*,” Arkansas house prices rose 0.9% in the first quarter and were 5.0% higher than a year earlier.  The U.S. average rose 1.3% for the quarter and was up 7.0% compared to 2017:Q2. 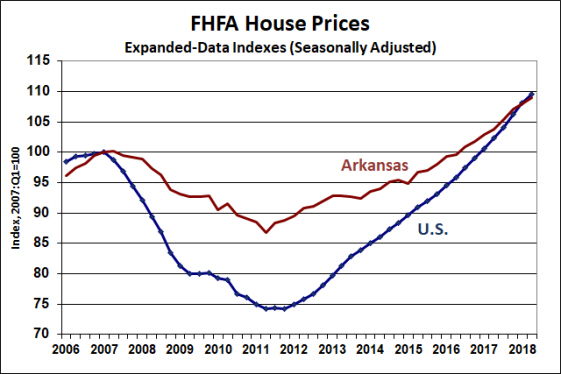 The downturn in house prices from 2007 til 2011 was far less severe in Arkansas than in other parts of the nation, and those markets that declined the most during the downturn have been experiencing the most rapid growth since.  From 2011:Q2 through 2018:Q2, Arkansas house prices increased 25.6% compared to the national average of 47.5%.

The pattern of larger declines in 2007-11 being associated with more rapid price growth since 2011 is apparent in the data for Arkansas’ metro regions.  Memphis and Northwest Arkansas suffered the largest declines during the crash and have both recovered sharply since then. On the other hand, Texarkana and Jonesboro experienced little if any price decline during the downturn, and have seen modest rates of price increase since then.   The experiences of other metro areas in the state lie between these two extremes. 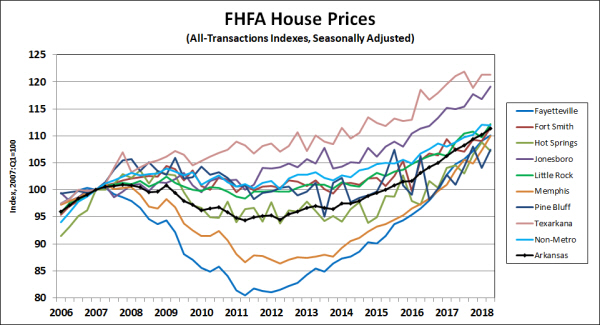 Using the FHFA’s “All-Transaction Indexes*,” house price growth over the past 5 years has exceeded 25% in both Fayetteville and Memphis.  Gains in other areas have been less substantial.  Nevertheless, the price changes from before the crash until 2018 are positive across the state, ranging from +6.0% in Pine Bluff to +20.2% in Texarkana. 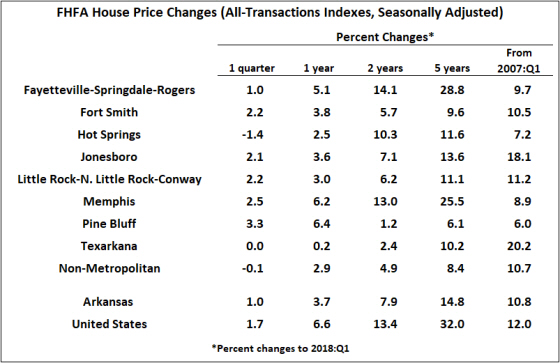