The U.S. Bureau of Economic Analysis recently published state-level estimates of Gross Domestic Product for the first quarter of 2021.  The report showed widespread recovery from the COVID-19-induced recession of 2020, with all 50 states showing sizable quarterly growth.  Annualized rates ranged from 4.5% in Texas to 10.9% in Nevada.  Arkansas’ growth rate for the quarter was 6.9%, slightly higher than the nationwide average of 6.4%. 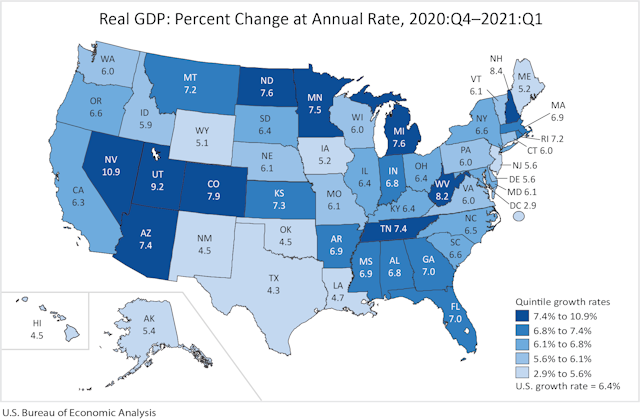 A breakdown of quarterly growth rates by sector shows that Arkansas outpaced the national average in most industries.  For some sectors, including Retail trade and Transportation & Warehousing, Arkansas’ growth rate was slower in the first quarter, but had already displayed above-average recovery in the second half of 2020.  The largest contributor to growth was in Durable Goods Manufacturing, which contributed nearly 2 percentage points to the state’s growth rate.  The report from the BEA noted that “This industry was the leading contributor to the increases in 24 states.”  Arkansas trends were also consistent with nationwide patterns showing rapid growth in Information Services, as well as in  Professional, Scientific, and Technical Services.  Arkansas, along with 35 other states, also followed the national trend of seeing negative growth in Nondurable Goods Manufacturing. 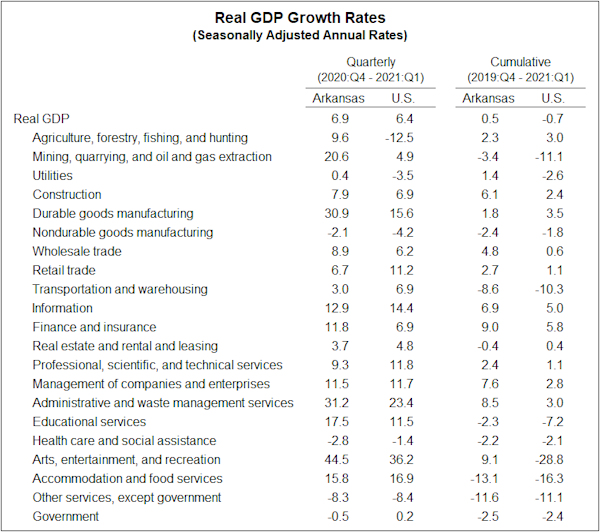 The second two columns of the table show cumulative GDP growth since the fourth quarter of 2019 (which has been officially designated as the quarterly business cycle peak).  Arkansas is one of only fifteen states that are producing more now than before the pandemic (see also the figure below).  In other words, Arkansas and 14 other states have apparently completed the recovery phase of the economic expansion. In some sectors, growth has been substantial: for example, Finance and Insurance has grown at an average rate of 9.0% over the most recent 5 quarters covered.  Several sectors continue to show the lingering effects of the economic contraction at both the state and national levels: production remains lower than pre-pandemic levels in Transportation & Warehousing, Education, Health Care, and Nondurable Goods Manufacturing. 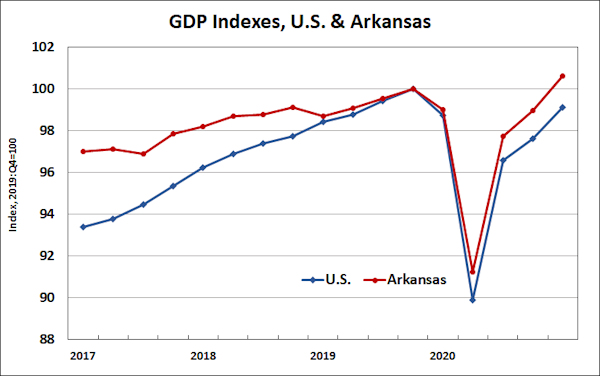 Data on GDP, particularly at the state level, is often subject to substantial revision.  The BEA will report revised historical statistics when the second-quarter data are released on October 1.