Latest data from the Arkansas Department of Workforce Services and the U.S. Bureau of Labor Statistics showed the Arkansas unemployment rate ticking down to 6.2% in September, down from 6.3% in August (seasonally adjusted).  The number of unemployed in the household survey declined by about 850, while the number employed increased by more than 4,500.  As a result, the size of the labor force was up by 3,700.  Both employment and labor force participation had been sliding downward since March of this year.  September’s upticks suggest that the downward trends have subsided. 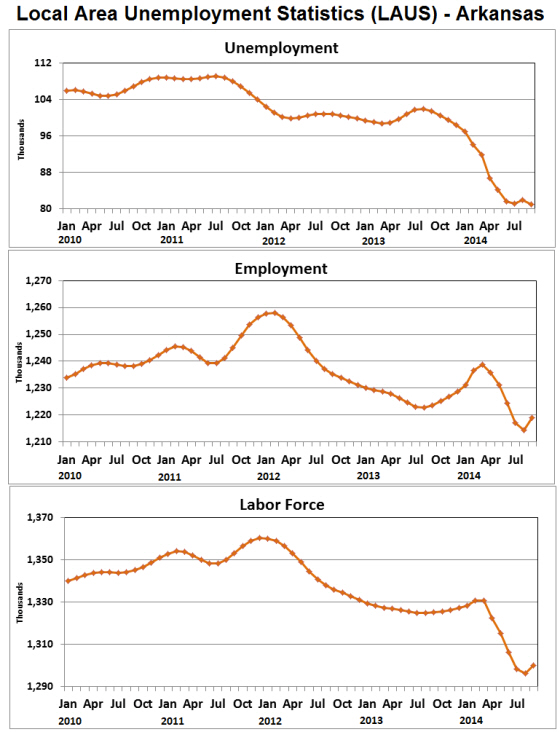 Payroll Employment
Nonfarm payroll employment increased by 2,900 in September, following a revised increase of 800 in August (seasaonally adjusted).  The not-seasonally adjusted data released by the Arkansas Department of Workforce Services showed a monthly increase of over 15,200.  However, that increase was entirely attributable to the start of the school year.  State and local government employment was up 13,100 (reflecting employment public schools, colleges and universities), while employment in Educational services was up 2,100 (reflecting employment at private schools).  The seasonally adjusted data (shown in the table below) revealed a strong gain in Professional & Business Services (+2,300).  Construction emp0loyment was up slightly (+800) while manufacturing employment declined a bit (-700). 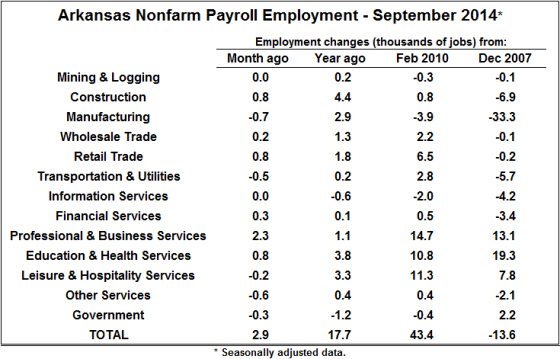 Overall, the current statistics show an employment increase of 43,400 since the trough of February 2010, leaving the state down by only 13,600 jobs relative to pre-recession levels.  However, the data for the past 18 months is subject to annual benchmark revisions that will ultimately be published in March 2015.  As is the tradition here at the Arkansas Economist, we’ve taken a look at the underlying detailed data in order to anticipate the nature of the visions — an exercise we’ve called “forecasting a revision of history.”

At the Little Rock Regional Economic Briefing last week, we presented the most recent version of the forecasted revision of history.  Using data from the Quarterly Census of Employment and Wages (QCEW) through March 2014, the next round of revisions to nonfarm payroll employment are expected to show a downward adjustment of approximately 9,400 jobs.  As shown in the figure below, the revisions will primarily effect the spurt of job growth that show up in the current data for the second half of 2014.  After applying the expected revisions to the newly-released statistics, the totals in the table above would be modified to show a net gain of only 34,000 jobs since February 2010, leaving total employment 23,000 below pre-recession levels. 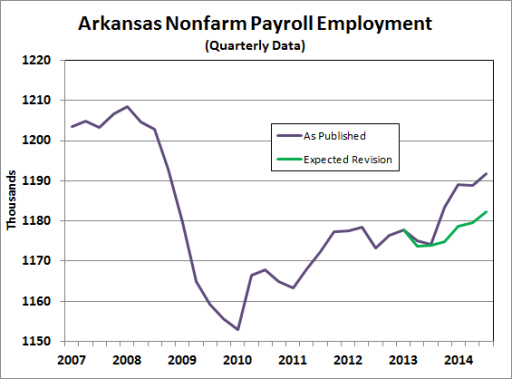